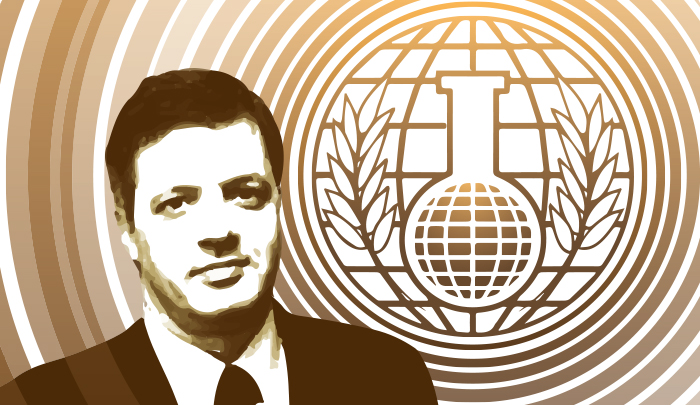 When chemical engineer Marcelo Kós joined the Organization for the Prohibition of Chemical Weapons in September 2012, he didn’t expect that OPCW would soon be thrust into the global spotlight. Why would he? The Netherlands-based agency had been working efficiently but in relative obscurity since 1997 to rid the world of chemical weapons.

That quiet life ended in August 2013, when nine of the 60-plus inspectors that Kós oversees as head of the Inspectorate Division volunteered to join a United Nations mission investigating whether chemical weapons had been used in Syria. The mission, which at one point drew sniper fire, obtained environmental samples, as well as biological samples from hospitalized victims, while ensuring a credible chain of custody. “Usually in activities like this, a team is under immense pressure,” Scott Cairns, OPCW’s team leader, says in a videotaped interview. Kós agrees: “It’s been very stressful.”

The inspectors concluded that the nerve agent sarin had indeed been used to kill 1,400 people in a town near Damascus. While the team did not assign blame, its findings added to the horror of a civil war that has claimed more than 100,000 lives. They prompted the government of Bashar al-Assad, under threat of possible U.S. military action, to pledge that it would destroy its chemical weapons stockpile. In October, five of Kós’s inspectors went back to help the Syrians put together a declaration that outlined the full amount and content of the country’s toxic arsenal.

Comprising 190 member countries, the OPCW is the implementing body of the 1992 Chemical Weapons Convention, an agreement intended to remove the threat of chemical warfare worldwide. Kós’s inspectorate monitors the ongoing destruction of existing chemical armories in the United States, Russia, Libya, and China, as well as Syria, and inspects the worldwide chemical industry to ensure the weapons don’t re-emerge. For its work in Syria and elsewhere, OPCW was awarded the 2013 Nobel Peace Prize. The accolade was unexpected but welcome, says Kós, 55: “It provided us with more visibility, and that’s been useful.”

In subsequent months, inspectors worked with Syrian officials to verify that around 1,300 tons of chemical agents were stored at various facilities around the country. They’re now working with Syria to finalize plans to destroy its manufacturing facilities – an exercise that will take Kós himself into Syria for the first time. Meanwhile, OPCW is overseeing the shipment of agents out of Syria for destruction. The first tranche was loaded onto a Danish ship in the Syrian port of Latakia in early January. Around 700 tons of the most dangerous chemicals will eventually be destroyed aboard a specially outfitted U.S. Maritime Administration cargo ship, the Cape Ray, using a process called hydrolysis. That’s a tried and tested way of treating the toxins with hot water and chemical reagents. The resulting effluent will then be transported from the ship to land-based commercial facilities that will dispose of it, and not a drop will be released into the sea.

Kós, who earned a bachelor’s in chemical engineering from the Universidade Federal do Rio de Janeiro, spent 20 years at the Brazilian Chemical Industry Association as director of industry and regulatory affairs. That job required him to mix with political leaders, and he was part of the Brazilian team that helped write the pre-conference proposals that led to the CWC. In 2012, the government recommended him to OPCW for the inspectorate job. His degree is useful in his work, he says, because when he consults with his inspectors, many of whom are chemists and chemical engineers, “I understand what they’re saying.”

Can OPCW reach its ultimate goal of eradicating chemical weapons? “I think that’s possible,” Kós says, at least in the historical context of wars between states. But he admits that if a terrorist group wanted to brew small batches of deadly toxins, “that would be very hard to detect.”