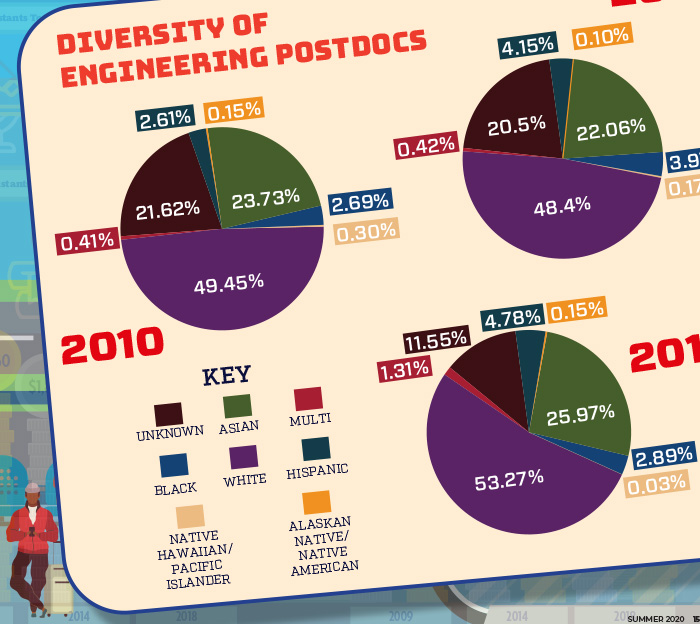 Postdoctoral appointments tend to be temporary positions that allow individuals to gain more research experience before taking a permanent job in academia. Applicants for tenure-track faculty positions are often expected to have had experience as postdocs. Since 1966 the National Science Foundation has conducted an annual census survey (www.nsf.gov/statistics/srvygradpostdoc) to collect data on the number of postdocs working within academic institutions in the United States, as well as the demographics of the postdocs and their primary sources of funding.
As the accompanying graphics illustrate, the number of engineering postdocs in the United States rose substantially between 1998 and 2018. Yet throughout that period the proportion of temporary visa holders was above 60 percent. As a result, the gap between the number of postdocs from overseas and the number of permanent residents grew wider. In fact, since 1980, there have been more engineering postdocs from other countries than U.S. citizens or permanent residents.

Among U.S. citizens and permanent-resident postdocs, racial and ethnic diversity remains very low. The proportion of underrepresented racial and ethnic groups in engineering postdoctoral positions has been below 5 percent for the past decade. Meanwhile the proportion of white citizens and permanent residents and those of Asian heritage has grown since 2010. If future faculty members are drawn from the current pool of postdocs, racial and ethnic diversity will continue to remain low among engineering professors.