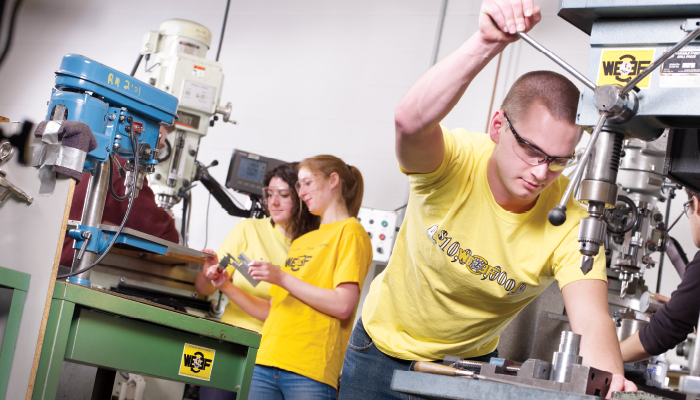 No one would use the term venerable to describe the University of Waterloo. Set on a former cornfield some 70 miles west of Toronto, the campus’s oldest building dates only to 1958 — a year after the first 74 students began classes in two makeshift structures erected on the parking lot of Waterloo College down the road.

Yet that fertile turf gave rise to what today is Canada’s largest — and many would claim most progressive — engineering school, with 8,300 students, 245 faculty members, and a global reputation for excellence. The newsweekly Maclean’s has deemed Waterloo the most innovative university in Canada for 21 years in a row. The latest Academic Ranking of World Universities ranked it 43rd for engineering. Waterloo also is one of the world’s top three recruiting universities for Google, which has an office in the campus’s 120-acre David Johnson Research and Technology Park, as do companies like Cisco and SAP. Indeed, over the years the school has given birth to an impressive array of technological breakthroughs and high-tech entrepreneurs. BlackBerry, formerly known as Research in Motion (RIM), for example, grew out of work that co-founder Mike Lazaridis began as an electrical engineering undergraduate.

Behind Waterloo’s rise to preeminence lies a singular historical focus on technological innovation, research, and industry partnerships. The co-op program, the world’s largest, has remained a core part of the curriculum since the university opened its doors. So, too, has a policy that gives students or faculty full ownership of any inventions. More recently, a universitywide commercialization center has helped engineering entrepreneurs find everything from financing to office space to legal assistance. There’s even a special undergraduate dorm where entrepreneurs have access to business expertise.

Not surprisingly, Waterloo attracts some of the brightest students from Canada and beyond. Of the 1,500 freshmen who entered its 12 engineering programs in 2012, two-thirds had high-school averages of 90 percent or more. Beyond robust transcripts, all had to complete a six-page application that probed such areas as their most memorable books and what discussions they’ve had with engineers and Waterloo graduates. “We don’t just want students who are academically strong but also people who are well-rounded and have a sense of the world,” explains Pearl Sullivan, dean of engineering.

That world has changed considerably since a group of Canada’s most influential industrialists, scientists, and educators gathered in 1956 at St. Andrews-by-the-Sea, New Brunswick. The Cold War’s rush of engineering discoveries had revealed alarming gaps in Canada’s postsecondary system, particularly the need for a technological workforce. Ken McLaughlin, author of two books on the history of Waterloo University, explains that business moguls felt that by working in concert, universities could provide the talent and research industries needed — “sort of like the same rhetoric you hear today.”

One idea floated at the conference concerned learning opportunities that would combine both classroom and direct work experiences. Back then, Waterloo was a small Lutheran institution with a few hundred students. A college representative visited Boston’s Northeastern University, a leader in cooperative education, and thought it a good model. However, Waterloo was too small and remote to place more than a handful of engineering students locally. That suited Ira Needles, president of B.F. Goodrich Canada and one of the early mentors of Waterloo’s engineering program. “Suddenly you had an advocate pushing for co-op education, a man with contacts of many of the presidents of major Canadian industries,” notes McLaughlin. Students were encouraged to go anywhere the jobs were, whether Halifax or Houston, Saskatoon or Seattle.

By creating the engineering program from scratch, Waterloo could chart a different course from such well-established Canadian colleges as McGill or the University of Toronto. Since “people were suspicious of co-op,” Waterloo’s founders “decided that the engineering school had to be research intensive,” explains McLaughlin. This drew a group of young, high-caliber professors who were out to prove themselves and create a progressive program unlike the hidebound prewar curricula dominated by older professors, he says. It also started to attract top Canadian students. “Success bred success,” says McLaughlin.

Waterloo’s co-op program — and its pipeline to potential employment — remains a big draw. Engineering undergraduates spend six of 18 terms working in industry, earning as much as $75,000 over the course of their two off-campus years. These stints often lead to full-time jobs; in 2007, many of the 400 students with paid internships at BlackBerry landed permanent positions. Pearl Sullivan, the dean, believes co-op experiences make students more entrepreneurial. “They can look at ways and opportunities to improve a business,” she explains. “Engineering is problem solving, and I think the rigor of our program and the confidence that they gain working in industry enables them to identify a gap in technology that they can pursue.”

Co-ops also let students test-drive different career paths. Mehmet Murat Kiy, an American fourth-year nanotechnology student who chose Waterloo over the University of Michigan and Duke because the co-op experience seemed more beneficial than a purely academic program, worked in the Philippines, Cambridge, Mass., and BC Hydro in Vancouver. He also published a 2012 paper as primary author in Chemistry: A European Journal. “I did a couple of research jobs, and after doing it for a while I realized I wouldn’t want to do it for the rest of my life—maybe on and off, but not for a career,” he explains. “The co-op program helps you decide things like that.”

Waterloo’s policy on intellectual property proves another big plus. In place since the university’s inception, it grants creators 100 percent ownership of any ideas and products developed at the school. Unlike at other colleges, there is no expectation of revenue sharing if a faculty member leaves to commercialize a product. That helps reduce the barriers between lab and marketplace, says Scott Inwood, director of the Waterloo Commercialization Office, which helps entrepreneurs navigate financial and legal hurdles. If a “university has a 20 percent revenue share on anything a faculty member does independently,” he explains, “that 20 percent baggage comes along for the ride when they go talk with investors or a company. It gets in the way of deals. They’ve got a 20 percent partner who isn’t contributing anything to costs for patents or helping them commercialize it. Here, there is no such baggage. It’s theirs. They don’t owe us anything. Godspeed and off you go.”

One beneficiary of Waterloo’s progressive commercialization policy is electrical and computer engineering professor En-hui Yang, who developed video compression technology along with fellow professor Ajit Singh based on research conducted at Waterloo. Their company, SlipStream Data Inc., was financed with venture money Yang obtained independently. It was eventually acquired by Research in Motion for a reported $50 million.

Inwood’s office helps secure financing for roughly 15 to 20 percent of the start-ups. In return, the university typically takes a 25 percent cut for help with licensing or arranging funding. Most of the start-ups are software related because of the low cost to get into business. “You can work in a garage and get a company going,” notes Inwood. “But if you’re in chemical engineering and you have to commercialize a catalytic processor and you need a couple of million for a pilot plant, there is obviously a high capital cost.”

Matt Rendall took full advantage of Waterloo’s commercialization help. As a student in the mechatronics program, which combines electrical, mechanical, and computer engineering, he and his fourth-year design team came up with an idea for a robotic vehicle to clear land mines. After graduating, he enrolled in Waterloo’s one-year master’s degree in business, entrepreneurship, and technology, then spent eight months in the university’s Accelerator Center, which offers sales, marketing, financing, law, and other crucial expertise. “It’s basically business with training wheels,” explains Rendall, who liked having mentors who were local professionals, not academics. He also appreciated the reasonable rent – subsidized by the university and Ontario’s Centers of Excellence – and month-to-month or no-lease options for offices with one desk or 30. The center also covers janitorial, Internet, and other overhead, “so you can laser-focus on getting your business off the ground rather than worrying about buying toilet paper,” says Rendall, whose company, Clearpath Robotics, is developing robotic vehicles for more than 300 military, academic, government, and environmental clients in 35 countries. He attributes his firm’s success to Waterloo – starting with the requirement to build an innovative technology in order to graduate.

Waterloo’s innovation support includes a dormitory where undergraduate entrepreneurs have access to such resources as pro bono legal support and mentors who can help with business plans and seed money. Opened in 2008, VeloCity draws what Rendall calls “start-up undergrads” who attend class during the day and are “hacking — or ‘entrepreneur-ing’ as I call it — at night.” One product hatched in VeloCity, an instant messaging app company called Kik Interactive, has grown to more than 30 million users since its inception in 2009.

Waterloo has taken an equally entrepreneurial approach to improving engineering teaching and learning. Now midway through its five-year strategic plan, the school is investing more than $8.5 million to redesign and modernize undergraduate labs. The first-year program is undergoing a complete overhaul, including who gets to teach freshmen. A new associate dean for teaching now oversees faculty development, and all prospective engineering faculty must give a seminar or teach a class so their teaching potential can be assessed.

Attending Waterloo may not guarantee that its graduates end up with a thriving venture. But “it sets up the necessary environment” for success, contends Rendall, who had been offered scholarships by 20 programs only to be initially rejected by Waterloo. He phoned, visited, met with faculty, and basically “wouldn’t take no for an answer” until getting accepted. The rest, as Waterloo’s pioneers might put it, is history.
By Pierre Home-Douglas, a freelance writer based in Montreal.
Photo Courtesy of University of Waterloo