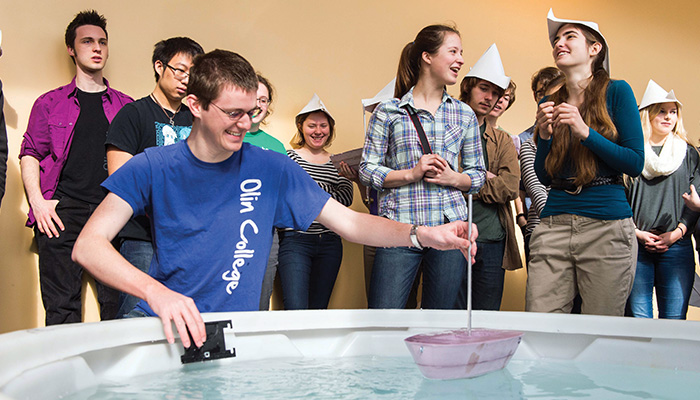 On Day 1 of the pilot course, first-year Olin College students were handed what looked like a straightforward challenge: Design and build a boat in two hours. Plunging in, they sought pointers on the Internet and then proceeded to cut up and assemble polystyrene foam, soda cans, and duct tape. They ended up with “boat-shaped objects,” as Rebecca Christianson, an associate professor of applied physics, dubs them. Tested in a pool of water, “most wouldn’t even float upright,” she says.

Call it a small craft warning. “That was a big ‘Oh, Geez’ moment,” recalls student Harper Owen. The mishap drove home the point Christianson and colleague Mark Somerville, a professor of electrical engineering and physics, wanted students to grasp: Just because a design looks like a boat doesn’t mean it will perform like one. A properly functioning boat, one that floats, remains stable, and can right itself after capsizing, takes an understanding of functional curves and surfaces, buoyancy forces, stability, and equilibrium—in short, math and physics.

The boat exercise opens Quantitative Engineering Analysis (QEA), a two-course sequence launched at Olin last spring as part of a three-year experiment. Its purpose: to help students acquire advanced math and physics skills and feel confident in applying them to engineering design.

Olin, founded in 1997 to prepare “engineer-innovators” with project-based learning, prizes its graduates’ imaginative approach to problem solving as well as their grasp of design processes, knack for posing the right questions, and ability to work well in teams. But observing senior capstone projects, Somerville and other Olin faculty members grew concerned about a skills gap.

“Our students are more confident in the design domain” but often struggle to apply deep knowledge of quantitative subjects in their engineering design projects, says Somerville. Where an Olin student might approach a problem by taking measurements, conducting experiments, and building models, a skilled professional might start with a “back of the envelope” calculation, he says. Depending on the problem, that calculation might draw on calculus, linear algebra, physics, mechanics, statics, statistics, or mathematical modeling. Such an approach saves time and allows for science-grounded predictions. Students will spend a long time on rudimentary computation, but “what you really need to do are calculations that blow the doors out,” Somerville says.

It’s not that Olin has neglected hard math and science. But “there’s a tendency among students to compartmentalize knowledge,” says Christianson. “They don’t make the connections” and recognize how math, physics, and engineering fit together. As a result, “they use trial and error frequently when it may not be possible or desirable,” she says. Ideally, says Somerville, students not only should know quantitative subjects but be able to move seamlessly from one to another as required by a particular problem.

Olin being Olin, the QEA developers eschewed lectures and textbooks for project- and team-based courses that demand lots of self-directed learning. Projects are designed to require the application of math and physics—the so-called power tools—to build the needed skill sets. As the course description explains, “Whether you are selecting the best part from a catalog, choosing an appropriate material, sizing a component, determining the effect of certain influences on your design, or optimizing your design within a parameter space, you often need to obtain (through experiment or calculation) and interpret quantitative information to inform your decisions.”

The first module gives students a chance to redeem their hapless ship-building effort. They’re given six weeks to design a vessel that adheres to stringent specifications, such as a 120-to-140-degree angle of vanishing stability, and be able to carry a certain amount of load. Meeting these specs requires knowledge of vector calculus, mechanics, and statics. “We had prototyped it ourselves. We confirmed it was doable,” Christianson says. Instructors encourage the students to seek out and acquire the quantitative knowledge on their own. When the designs are completed, students must be able to explain their choices analytically, drawing on their new knowledge.

The first module ended in triumph, with students pictured on Olin’s website hoisting aloft their successful designs. An accompanying article reported that “with one exception, the small foam boats did exactly what they were supposed to—float.”

In the second project, students develop algorithms for image processing and facial recognition, drawing on vector calculus, matrix manipulation, linear algebra, statistics, and computation skills. “We had to place restrictions on coding,” Christianson explains. While students might be able to complete the assignment using programming alone, at some point they would face a task where coding solutions don’t exist and would have to rely on the underlying math. In turn, she says, knowing linear algebra “enables them to be more creative coders.” Owen appreciates how instructors took her and her classmates “step by step to understand each mathematical piece before we wrote the code.” Result: “We learned both math and code.”

As originally planned, QEA students would spend the fall semester working on a “cubesat” microsatellite. But the project turned out to be less motivating than the Somerville team had hoped. Plus, says Owen, “the amount of content was kind of huge.” So the faculty worked with the students to change it. The redirected course “focused on introductory level controls, integrating dynamics, signals and systems, and differential equations ideas,” Christianson says. Students choose a mechanical or electrical control project and “develop and analyze a set of governing equations to understand the system behavior.” Projects include “analyzing and building a BB-8 style robot, noise-canceling headsets, and thermal control of a polymer filament extrusion system,” she says. Owen picked a quadcopter stabilization system.

From Tinker to Thinker

The QEA approach suits Owen’s learning style. “I’m in a minority at Olin. I did not like math” in high school, says the mechanical engineering major. “I need a hands-on way of applying it.” In the course, “I absorbed more math, and it will last a lot longer” than in the past, she says. Moreover, the mathematical modeling skills she acquired will be essential in her club project: building a robotic boat that can autonomously sail the Atlantic. “We couldn’t be successful without it,” contends Owen, who also has learned to recognize when math should be applied and what math tool to use.

“Before, I had a tendency to tinker” to figure out how something worked, says fellow student Eric Miller, a general engineering major with a robotics concentration. Tools offered by QEA “let me mathematically understand” what’s happening, he says. He also knows now how math can simplify a modeling problem and yet yield a more accurate result. “It’s giving us practice at finding tools” and using them in analysis, explains Miller, who was blown away by the discovery of Wolfram Mathematica. He’s used the computer algebra program outside class—for instance, to find what size fan would cool a hot, stuffy room. “I figured it out in five minutes,” he beams.

Miller, who had helped to prepare the course over the summer, didn’t expect math to generate such enthusiasm. “Students got really excited when they saw one piece of math work across multiple domains,” like “a wave sloshing and a swing swinging,” he says. That’s precisely the point of introducing QEA to first-year students, so they will see the advantages that come with a solid grounding in quantitative tools and practice using them in coming years. Notes Somerville: “If you avoided five hours of work, that sticks in your mind.” In time, students should gain confidence in both applying the tools they know and identifying ones they need to learn.

Short of the halfway mark, QEA is already a success by one measure. So many students want to take it that seats have to be assigned by lottery, Miller says. The ultimate test will be whether students have become practiced at smooth applications of math by the time of their senior projects. For Somerville, Christianson, and team, that will float their boat.

Mark Matthews is editor of Prism.
Design by Francis Igot