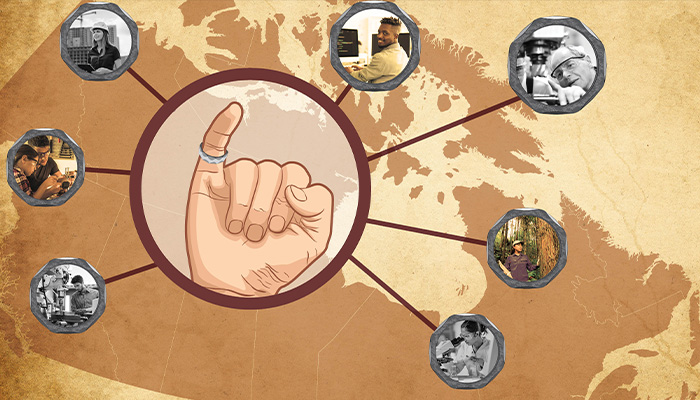 Canada’s Iron Ring rite of passage is a solemn reminder of engineers’ responsibility.

You might see it on the hand of someone in a boardroom, an office, a university campus, or a myriad of other venues: a ring of iron or stainless steel with facets cut out of its outside edge. For Canadian engineers it’s the visible, enduring sign of a ceremony that traces its roots back almost a century, and one so prized that the ceremony and the oath that is recited during it are copyrighted and diligently guarded in both Canada and the United States.

It all began in 1922 when seven past presidents of the Engineering Institute of Canada met in Montreal. One of them, University of Toronto civil engineering professor Herbert Haultain, proposed that just as doctors had the Hippocratic Oath, in which they promised to maintain the highest degree of professional and ethical integrity, Canadian engineers needed something similar. One of Haultain’s friends was Rudyard Kipling, the British author of The Jungle Book, “Gunga Din,” and “The Man Who Would Be King.” Winner of the 1907 Nobel Prize for literature and arguably the best-known writer of his time, Kipling was also impressed by the importance of the work engineers performed and mentioned them in both novels and poems. When Haultain asked him to help create a dignified oath and ceremony, Kipling readily agreed.

The result was the Ritual of the Calling of the Engineer. Like the Hippocratic Oath, it is not obligatory for professional status. Still, “very, very few miss it,” says Leonard Shara, chief warden of the nonprofit Corporation of the Seven Wardens in charge of administering and maintaining the ritual. For new engineers, “it’s a rite of passage and regarded as a highlight of their young careers.” The first “installation meeting” was held in Montreal in April 1925 with six engineers taking the oath and receiving their rings.

The ritual is exactly that—a solemn ceremony performed across Canada once or twice a year in a precise, prescribed order. Participants gather in places that can range from something not much bigger than a classroom to large halls that can hold hundreds of people or more, depending on the size of the group. For the ceremony marking the 500th time the ritual was performed in Montreal, the local branch rented the 3,000-seat concert venue Place des Arts. (Similar ceremonies are held in the United States to induct graduates into the Order of the Engineer, but only a small fraction of new engineers participates.)

Wherever the ceremony takes place in Canada, new engineers receive an envelope, with their ring inside, when they enter the room. A well-worn anvil sits on a stage with a chain wrapped around it that meanders its way up and down through the aisles and rows of seated engineers before returning in a continuous loop. During the ceremony, the senior supervising engineer hammers out the Morse code for the letters S-S-T three times. The letters stand for Stone, Steel, and Time—the first two being materials engineers traditionally worked with and the third being “the dimension that is completely out of our control,” according to Shara. The seven hammer strokes it takes to convey the letters in Morse code also serve fittingly as a tribute to the memory of the seven engineers who founded the corporation. (“Seven is a favorite number with us,” says Shara.)

The anvil also serves as a warning about the consequences of faulty engineering. It is fastened to an artifact from the Quebec Bridge, a cantilevered span across the St. Lawrence River near Quebec City that collapsed during construction in 1907. The collapse, which killed 75 workers, was blamed on flawed calculations that put too much weight on the structural beams. A rivet from the ill-fated bridge was donated by the Quebec City chapter to each venue in Canada that holds the ritual. “It reminds people that mistakes made by engineers can be catastrophic,” says Robert Paknys, an electrical engineering professor at Montreal’s Concordia University and one of the seven wardens in the city’s chapter, or “camp,” as it is called.

When students take their oath, they hold the chain in their left hand and raise their right hand while they repeat the words in unison a phrase at a time. It normally takes just two minutes. There is nothing special about the chain itself, Paknys says: “You could buy it at your local Home Depot. Its importance is what it symbolizes: the link between engineers and how the senior should mentor the junior. They are all bound together by the chain.”

There are 27 camps across Canada. No one is sure why the word “camp” was chosen, but some suggest that it sought to convey the camaraderie of a close-knit group. Each of the 10 Canadian provinces has at least one camp; the largest by population, Ontario, has nine. The most recent camp, in Charlottetown, Prince Edward Island—Canada’s smallest province—was added in 2018, when the ceremony was attended by eight students, whereas ceremonies in camps in Toronto and Montreal may play host to 300 or more new engineers at a time. In close to a century, more than 200,000 people have participated in the Ritual of the Calling of the Engineer, and currently 15,000 or so are added to the list every year.

The words of Kipling’s oath sound formal and archaic to 21st-century ears. Among the other promises, an inductee pledges: “I will not henceforward suffer or pass, or be privy to the passing of, bad workmanship or faulty material in aught that concerns my works before mankind as an engineer, or in my dealings with my own soul before my maker.” Those words are unchanged since the ritual’s inception. And therein lies one of the challenges to present and future wardens. Kipling was a man of his time. He was born in 1865 in India in the heyday of the British raj. He firmly believed in colonialism and, as he put it, “the white man’s burden” to civilize the rest of the world. Kipling’s world of engineers was exclusively white, Christian, and male. “But so many engineers graduating today in Canada are women, not white, and not Christian,” Shara points out.

How to embrace the future without destroying the past? That’s a hot topic among the wardens in the various camps and among the seven corporation wardens. “At the top of our recent plenary session in Victoria, British Columbia, was how we might make some alterations without, of course, losing the original essence and flavor,” Shara says. “It’s much more difficult to reconcile the past with the present in a sensitive and understanding way while still maintaining the tradition. You don’t want to throw out everything. We’re trying to deal with conflicting values with one foot planted in 1922 and one foot planted in 2019.” The corporation wardens are the ones who will vote on any changes. Traditionally, those seven believed in a unanimous vote to effect any alterations.

“On this issue,” admits Shara, “that will be much more challenging.”

After they have taken the oath, the students are given their ring by an already ringed engineer with at least four years of experience. The ring is worn on the pinky finger of the dominant hand, a tactile symbol of an engineer’s responsibility to the profession. Most rings—about 95 percent—are made from stainless steel; 5 percent are made from pure iron because, according to Paknys, some people are allergic to nickel, which is present in small amounts in stainless steel. “Last year one was made from pure silver because the person was allergic to just about everything.”

According to the archives of the corporation, “[t]he ring, for Kipling, is intended as an allegory. It is rough, not smoothed, and hammered by hand as, in the words of Kipling, ‘the young have all their hammering coming to them.’ ” Despite the fact that the faceted design is copyrighted, Shara occasionally faces challenges, especially when he is notified that phony rings are for sale. “Every time it’s brought to my attention—eBay, Alibaba, Etsy, etc.—I immediately invoke our copyright,” he says. “It’s one warning only, and then it goes right to my lawyer in Ottawa. They tend to desist pretty quickly when they get that lawyer letter.” He adds with a chuckle, “I just saw a comment on one site where the person says, ‘This is great. I don’t have to go to engineering school. I’m saving all kinds of time and energy but unfortunately, I don’t have a job yet.’”

Discreet but Not Secret

Because of its idiosyncracies, there is a perception even among some engineers that the Iron Ring ritual is a secret. “It’s just something that’s not talked about. We don’t talk about the ceremony,” a recent Iron Ring recipient commented to an interviewer. “It’s like the Fight Club,” he said, referring to the 1999 film about an underground club whose first and second rules are “You do not talk about Fight Club.”

Shara disagrees. “The ring can most certainly be spoken about in public, although we encourage talking about the oath even more, since the words therein truly convey the engineer’s promise to themselves, their colleagues, society, and their maker.” Paknys adds, “It’s personal and intimate and not a show. The ceremony is not secret but modestly discreet.” Still, Shara points out that each camp decides how to run its ceremony, and some are more secretive than others. The Vancouver camp, for example, does not permit anyone but engineers or candidates into the room. “That seems like a missed opportunity to me. I think it should be an open ceremony, a public celebration of the profession,” says Jim Olson, dean of engineering at the University of British Columbia. “But since the camps operate independently of universities and professional bodies, I have no formal say or mechanism for putting in my own recommendations.” Other camps, such as the one at Trois-Rivières, Quebec, are completely open to family and friends.

The ceremony struck Jennifer Wakefield, who attended the 2015 ceremony at the London, Ontario, camp as the mother of a new mechanical engineer, as a refreshing change from standard university graduation ceremonies. “I find it quite moving. It’s not rah, rah rah—we’re engineers. It’s almost a spiritual experience.” Her husband, Ed Bell, says he understands why some camps may not allow outsiders to attend. “The ceremony is a form of contrition for the rivalry and errors that had resulted in engineering debacles such as the Quebec Bridge disaster. The ceremony is more of a pledge to work honorably and faithfully before other engineers—their peers—rather than the public in general. That probably explains why only engineers are present in many places. It’s not meant to be a celebration.” Their son, Ted Bell, whose great-grandfather also wore an Iron Ring, says “pretty well everyone in my class was excited about it. It’s a milestone in your career. It reminds you of what you’re doing engineering for. It’s for the community, and if you mess up, it’s going to problematic for both yourself and those you’re engineering for.”

Jim Nicell, dean of engineering at McGill University, echoes Ted Bell’s impression. “The Iron Ring ceremony and the Ritual of the Calling of the Engineer are intended to bind our students as members of a profession, to a higher calling, We, as professionals—like doctors, nurses, lawyers, etc.—need to explicitly acknowledge our moral obligation to serve society.” He adds, “An oath publicly taken in the presence of friends, professionals, and family can be very powerful.”

Pierre Home-Douglas is a freelance writer and frequent Prism contributor based in Montreal.
Design by Toni Rigolosi