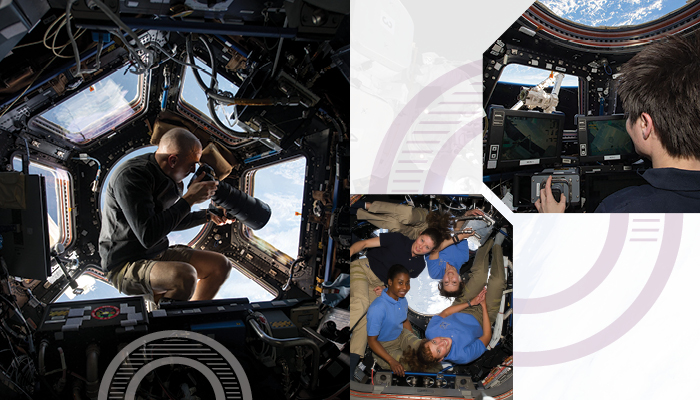 Seven windows have forever changed the way humans view, and think about, our planet. Installed on the orbiting International Space Station (ISS) by astronauts in 2010, the iconic cupola (“dome” in Italian) comprises a circular window 31.5 inches in diameter surrounded by six trapezoidal panes. Since the module became part of the ISS, astronauts have floated inside the panoramic observation deck, taking countless photos and hours of video for their space agencies, themselves, and the public. The stunning imagery, taken from about 250 miles above sea level, captures their space-eye view of Earth’s ever changing processes, from scattered drifting clouds to massive swirling hurricanes and even our planet’s “moods,” whether the hopefulness of household lights illuminating the night or the dystopia of wildfire smoke darkening the day.

Sometimes compared to the cockpit of the Star Wars Millennium Falcon spaceship or the viewing bay of the Nautilus submarine in 20,000 Leagues Under the Sea, the engineering marvel that became a window on the world almost failed to launch. Configurations to provide the ISS with better visibility changed along the way, including the number of windows planned and even the possibility of two cupolas instead of one. NASA’s design process progressed to fabrication of cupola portions, but budget cuts repeatedly canceled the project. In 1998, the European Space Agency took over the effort, which ultimately cost $27.2 million (€20 million), and the cupola was completed in Italy in 2003. By the time the crew of the Space Shuttle Endeavour’s mission STS-130 ferried the 9.68-foot-wide, 4.9-foot-high module to space for installation in early 2010, astronauts had been living and working on the International Space Station for nearly a decade.

One advantage of the cupola’s much later arrival was that astronauts aboard the ISS were well practiced in using the Canadian Space Agency’s exterior robotic Canadarm2. To maneuver the cupola into place so that its windows faced Earth—while the space station was speeding through space at 17,500 miles per hour—astronauts inside the station relied on real-time video views from external cameras to accurately guide the 57.7-foot Canadarm2 and its two gripping end effectors. The cupola’s permanent attachment now enables direct visual observation when manipulating the robotic arm and hands. The visibility improves steering of the Canadarm2 for moving huge equipment, capturing and installing visiting spacecraft from various countries, and safely transporting spacewalking astronauts to different parts of the 357-foot-long ISS for engineering installations and repairs. Only two astronauts are typically inside the module while the Canadarm2 robotics workstation is in use. Even then, just their upper bodies float inside the cupola and their legs dangle in the adjacent Tranquility module.

The cupola’s windows through which astronauts take pictures and observe are designed with four parallel panes: an inner scratch pane, which protects two middle pressure panes from accidental damage, and an outer pane. This multi-pane configuration has enabled astronauts inside the ISS to replace the scratched inner pane of the circular window without risking air pressure loss for the station. Outside in space, the exterior panes must withstand both scorching solar rays and frigid cold, with temperatures soaring to 250 degrees Fahrenheit and plunging to minus 250 degrees Fahrenheit. The shifts in temperature extremes repeat approximately every 45 minutes as the ISS flies into, out of, and back into darkness, through 16 sunrises and sunsets for each of Earth’s 24-hour days.

Each ISS cupola window is made of fused silica and borosilicate glass and also has its own outside aluminum cover. Manually operated by astronauts from inside the dome, all seven protective covers are typically opened together when astronauts need or want the full 360-degree view. In closed position, the shutters shield the windows from flying micrometeoroids and other orbital debris, such as tiny satellite fragments and lost space equipment. Impact from objects as small as a few thousandths of a millimeter across can cause visible damage to an exterior pane. The space-facing panes have sustained debris impacts, but nothing serious enough to require an extravehicular activity (EVA), or spacewalk, for replacement.

In its first 10 years, the cupola has become a window on history, giving astronauts a panoramic view of many firsts, including the 2019 all-woman spacewalks by engineer Christina Koch and scientist Jessica Meir and the 2020 arrival and departure of engineers Bob Behnken and Doug Hurley in the commercial SpaceX Dragon spacecraft. The cupola has rightly earned its moniker, which once denoted the raised observation deck on a train’s caboose from which the crew could monitor the train’s full length.

The cupola has also become astronauts’ go-to spot for watching the wonders of space and the splendors of our planet. Growing up, Christina Koch peered up at the stars and planets through a backyard telescope. On her ISS mission, she gazed out at favorite phenomena, like the auroras, and down at Earth’s ever-changing views for 328 days—the longest consecutive spaceflight by a woman. As the station’s orbital path takes it over 90 percent of the world’s population, Earth gazing helps astronauts relax from their intensive science and engineering work schedule; feel less far away from family and friends, colleagues, and humanity at large; and draw inspiration.

Seeing Earth from space brings some astronauts to tears. Many experience an awe known as the “overview effect,” a term coined by space philosopher and author Frank White.

Bob Behnken helped install the cupola during spacewalks in 2010. As he describes it, the overview effect occurs when astronauts “look back at the Earth and realize that there are no boundaries or borders observable from space. You see that it’s a single planet with a shared atmosphere. It’s our shared place in this universe.”

As humanity faces challenges such as the coronavirus, “we recognize that we all face them together,” says Behnken.

“You see this flowing, beautiful, colorful, alive planet,” observes engineer Nicole Stott, a two-time ISS veteran who was aboard both the year before and the year after the cupola was installed. “You realize we’re all traveling on spaceship Earth together. When you get back home, you have to share that realization with others—to help take care of the planet and the people who live here.”

Author Deborah Lee Rose (deborahleerose.com) won the national AAAS/Subaru SB&F Prize for Excellence in Science Books for Beauty and the Beak: How Science, Technology, and a 3D-Printed Beak Rescued a Bald Eagle, and the national DeBary Award for Outstanding Children’s Science Books for Scientists Get Dressed. Her 16th book, Astronauts Zoom! (April 2021), celebrates 20 years of astronauts living and working on the International Space Station.
Design by Nicola Nittoli

Those of us who can’t travel to the International Space Station can still get our own personal overview effect. One way is by exploring NASA’s free photo and video resources, including the vast NASA Image and Video Library (https://images.nasa.gov), and the Windows on Earth project, including a Mystery Image of the Day for Education (https://www.windowsonearth.org). These collections can be used in the teaching of subjects from volcanology and meteorology to environmental and aerospace engineering. Educators, students, parents, engineers, scientists, policymakers, writers, and others can glean a deeper understanding of our home planet from astronauts’ images online.

Stunning images of Earth and space are also found in books of astronauts’ photos. Astronaut Jay Apt, now a professor in Carnegie Mellon University’s Tepper School of Business and the Department of Engineering and Public Policy, coauthored Orbit: NASA Astronauts Photograph the Earth. The book’s extra-large page format and groundbreaking digital process for reproducing original NASA photos shot pre-ISS will make readers feel they, too, are watching through windows in space. View From Above: An Astronaut Photographs the World zooms in on Earth more recently, with a selection from hundreds of thousands of photos shot by astronaut Terry Virts, who helped deliver the cupola module to the ISS and later commanded the space station.