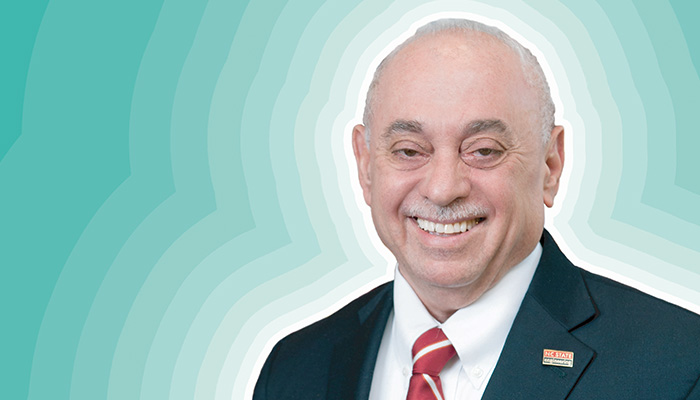 The ASEE president’s career reflects his early realization that engineers can make an impact.

All of us are shaped, to some extent, by where we spend our formative years. For Louis A. Martin-Vega, that pivotal period began when his father retired from the Air Force and the family moved to Puerto Rico. A high school sophomore at the time, the future ASEE president was struck by the esteem in which engineers were held on the island. Their ranks included two former governors and leaders in industry and economic development. “For me,” says the ebullient 68-year-old, “the idea of engineering was not something narrow and only technically driven but a platform where you could move in many directions and have significant effects on society.”

Martin-Vega’s chosen direction was education, and a career that would leave a national mark on teaching, broadened participation, collaboration between K-12 and university instructors, and research partnerships among academia, government, and industry. It started with a B.S. in industrial engineering from the University of Puerto Rico at Mayagüez, followed by an M.S. in operations research from New York University. He remained stateside to complete a Ph.D. in industrial and systems engineering from the University of Florida. But offered a chance to teach at Mayagüez, Martin-Vega jumped at it, spurning mainland offers. He did so partly because Puerto Rico was where he felt he could make the biggest impact, and partly out of duty. The territory’s economic development administration had supported some of his graduate work. “Even though it wasn’t a contractual commitment, I certainly felt a moral obligation to give back.”

Plus, he says, “teaching was always in my blood. At that time, UPR-Mayagüez was primarily a teaching university. I ended up spending five and a half years there and probably taught two to three times as many courses as I would have at a research-intensive university. You really immerse yourself in the educational component when that’s your main mission. If you have that kind of experience it’s going to stay with you—how to be creative in the classroom, how to motivate students. I was never going to be someone who was in a research lab completely disconnected from teaching.”

Returning to the University of Florida as a visiting associate professor, Martin-Vega anticipated staying just a year, giving his family a chance to reconnect with friends in the Sunshine State. “Well, one year turned into two and eventually 10 or 11 years,” he says with a chuckle. The school’s research orientation marked a change from Mayagüez, where any research had to be performed on top of a heavy teaching load. Florida offered the chance to mentor Ph.D. students. It also brought him face-to-face with his minority status as a Hispanic. “I was the only one in my department, but you’ve got to realize that when I received my Ph.D. from Florida in 1975 I was one of, I think, 22 or 23 Ph.D. Hispanic graduates in engineering. Not just in Florida—in the country! I had done my undergraduate degree on the island where you’re not part of a minority, so I really never had a perception of the role of Latinos as a minority until I came to the mainland and I became a lot more aware of it.”

Improving that situation is a challenge much like improving the number of female students. For that to happen, Martin-Vega believes, you need critical mass in your faculty. “It’s stronger than just role models. It’s more existence proof. Why do you have so many young women going into marine sciences? Well, go down to Sea World if you’re a young girl and you see who’s running the show, right? You see that and you say, ‘This is me. This is who I can be.’ When I went to school in Puerto Rico I had that in front of me all the time, but if you don’t have that it’s hard to identify with it.”
At North Carolina State University, where Martin-Vega is dean of engineering, 25 percent of the roughly 10,000 engineering students are female, and their numbers are rising. Women accounted for 33 percent of 2016-17 applicants. “We have a lot of investment in programs in women in engineering, chapters of women in computer science, and some 40 summer camps—many led by women faculty,” Martin-Vega says. “There’s no overnight answer. You really have to work at it and be committed to it.”

Less progress has come in increasing the number of Latino students, but Martin-Vega hopes this will change in the next few years. “If we are going to be attracting a more diverse population of engineering students, somehow we have to have that represented better in our faculty and administrative leaders in engineering.” He also believes that the perception of engineering among young Hispanics needs to change. Too many see it as a dry profession, he says, while research has shown that service-oriented work is more attractive to underrepresented minorities.

While at the University of Florida in the late 1980s, Martin-Vega was recruited by the National Science Foundation to serve as program director for the Division of Design and Manufacturing. John White, who led NSF’s engineering directorate at the time, was committed to expanding the participation of women and underrepresented minorities in the directorate. He said when he hired Martin-Vega, “I had no idea what I was about to get, but it was one of the best things I did while I was there. Louis was a game changer. He threw a huge rock out into the lake and made such a splash that those ripples are still going on.” White, who later became chancellor of the University of Arkansas, points to Martin-Vega’s pioneering work at NSF bringing together the theoretical concepts coming out of research and applying them in industry to solve real problems and improve competitiveness. “It was his idea that has evolved into the GOALI program (Grant Opportunities for Academic Liaison with Industry) that brings industry people to work with faculty and graduate students and that has had a huge impact.” Martin-Vega received NSF’s top program officer award.

Later, after stints as the Lockheed Professor at Florida Institute of Technology and Chair of Industrial and Manufacturing Systems Engineering at Lehigh University, he returned to NSF, this time as director of the Division of Design, Manufacture and Industrial Innovation and eventually as acting head of the Engineering Directorate. That latter post “was a big job,” he says. “The breadth was tremendous. Now you’re basically leading all the efforts in engineering across the country for NSF.”

That breadth encompassed both disciplinary research and education. Martin-Vega helped establish the Research Experience for Teachers (RET) program to provide K-12 instructors firsthand experience in research. As he explained to an interviewer in 2015, “They could take these personal connections with engineering back to the classroom and inculcate interest in engineering among their students. The bottom line of this program is that if we were going to talk about enhancing engineering education, we needed to better create a presence for engineering in the K-12 environment—and the earlier the presence, the better.”

Martin-Vega’s tenure at NSF, where he remains influential as chair of the Engineering Directorate’s Advisory Committee, drew favorable attention and helped propel his rise in academia. Appointed as engineering dean at the University of South Florida, he was hired away five years later by NC State, a school with the nation’s 12th largest undergraduate engineering enrollment, to succeed dean Nino Masnari, who was retiring.

“He’s been a very strong leader, a person with lots of enthusiasm who gets people excited about what’s going on,” says Masnari, who encouraged Martin-Vega to apply. The new dean continued growth begun by Masnari, which included moving the engineering college to state-of-the art research facilities at NC State’s new Centennial Campus, where 75 percent of its faculty and staff now work. Masnari credits Martin-Vega—and support from Chancellor Randy Woodson—with spearheading a drive to erect a $154 million, 227,000-square-foot building to house the departments of civil, construction, and environmental engineering and industrial and systems engineering, as well as administrative offices.

NC State makes the most of its location in the Research Triangle, long one of the country’s leading crucibles of innovation. Martin-Vega points with pride to its two NSF engineering research centers. “Until last year, we were the only college in the country leading two ERCs,” he says. “You need a critical mass of terrific people to make that happen. We’ve been given good resources and support to grow our faculty. It’s a place where the impact is huge both on the national stage and certainly for the state of North Carolina.”

The ERCs have given NC State a prominent role in advancing clean energy and healthcare technology. The oldest is the 2008 FREEDM (for Future Renewable Electric Energy Delivery and Management) Systems Center, a seven-university international consortium with numerous industry partners. It seeks to revolutionize the electricity grid so as to make full use of intermittent renewable energy (Prism, January 2011). In 2012, NC State established Nanosystems Engineering Research Center for Advanced Self-Powered Systems of Integrated Sensors and Technologies (ASSIST), which is developing robust, wearable health-systems devices to measure everything from a patient’s physiological state to exposure to pollutants (Prism, May 2015).

NC State is also the lead institution for a Department of Energy R&D hub, PowerAmerica, which focuses on research, design, and manufacture of wide bandgap semiconductor-based power electronics. Most recently, it was tapped to lead the Southeast hub for a new Smart Manufacturing Innovation Institute (SMII) that aims to spur technological innovation for advanced manufacturing.

The engineering school’s success has been recognized both regionally and by the White House. “Companies like Cisco and IBM, they come to this school when they’re looking to hire, because of the quality of the engineering program,” President Obama said on a visit to NC State in 2015. For his part, Martin-Vega was named one of the 50 Most Influential Hispanics in the country by Hispanic Business magazine in 2014. Earlier, he received the 2008 Outstanding Engineer award from the North Carolina Society of Engineers and the 2012 Frank and Lillian Gilbreth Industrial Engineering Award from the Institute of Industrial Engineers.

As dean, Martin-Vega says, his role is to recognize that “your goals and objectives as an individual are going to be subsumed to some degree to trying to help an organization achieve greater goals than what you can do individually.” He adds, “You have to enjoy working with people. My job is to facilitate success of other people. You get the best people you can, let ’em run, you support them, and try to make sure you’re there for them. You have to deal with external constituencies all the time with alumni and fundraising.”

Joseph Rencis, engineering dean at Tennessee Tech and Martin-Vega’s immediate predecessor as ASEE president, says of his colleague, “I always like to have a word or two to describe someone, and for Louis it’s ‘natural leader’. He’s the guy you really want to follow. When he’s talking, he pulls you in. He’s very passionate about engineering education and always looking for ways to move it forward, especially in K-12.”

Some of that passion, Martin-Vega hopes, will be picked up by students, convincing them they can make a difference. “Young people need to believe that while the core motivation of engineering may lie in the excitement of discovery and innovation—and that is the core motivation—it is also a career with significant opportunities for societal impact.” He himself began to grasp these opportunities as a youth in Puerto Rico. In the decades since, he made them a reality.

Pierre Home-Douglas, a frequent contributor to Prism, is a freelance writer based in Montreal.