The 2020 Election Ballot will contain six changes to the Society’s Constitution in addition to nominations to fill seats on the Board of Directors, candidates’ statements, and biographies. All the amendments were approved by the Board at its June 2019 meeting.

In summary, the amendments:

The full text of the revised Constitution, with changes and additions highlighted, can be found at this link:
https://files.asee.org/data/public/3cb6cf3601a834c0.php

Explanatory text for Article I, Section 2:

Article III of the Constitution of ASEE outlines organizational procedures, as well as the leadership of ASEE. The Constitution presently includes language regarding the Board of Directors’ responsibility to determine the election cycle of council chairs or chairs-elect.

The proposed change to the Society’s Constitution removes the statement “The Board of Directors shall designate which councils shall elect chairs or chairs-elect in odd numbered and even numbered calendar years,” since election cycle details are described in the Constitution (Article IV, Section 2). Thus, this statement is redundant.

For the past year, all five ASEE vice presidents have been asked to attend all meetings of the Finance Committee in order to ensure that they are knowledgeable and aware of the financial aspects of the organization’s operations. The Vice President of Finance and the Vice President of External Relations are the only two of the five vice presidents who are official members of the Finance Committee (along with the President, President-Elect, Most Immediate Past President, Executive Director, and two outside financial experts).

As a result, the Vice President of Member Affairs, Vice President of Professional Interest Councils, and Vice President of Institutional Councils, who are not currently official members of the Finance Committee, are asked to attend these meetings without the opportunity to vote on issues that appear before the committee. The members filling these positions are well-informed about financial issues facing the Society, and they offer unique perspectives on how the Society should manage its resources. For these reasons, it is proposed that these three vice presidents be given full membership on the Finance Committee, including the right to vote on issues that come before it.

Article III of the Constitution of ASEE outlines organizational procedures, as well as the leadership of ASEE. Article III also describes the President’s ability to create and appoint standing and special ad hoc committee in service to ASEE. The Constitution presently lacks language to clarify the nature and scope of such committees.

The proposed change to the Society’s Constitution describes more succinctly the types of standing and special ad hoc committees that can be created to achieve the Society’s goals. These include: task forces, committees, and commissions. Each of the aforementioned entities suggest different purposes, durations, and reporting responsibilities. For example, a task force will focus on one particular aspect of the Society’s work and have a finite life, whereas a committee or commission will have a broader scope and be ongoing.

The proposed new language in Article VI, Section 2 intends to adjust the timing of annual elections to better accommodate modern electronic voting. This language proposes that the due date for nominations change from the current date of September 1 to the date of July 1. It also proposes that voting by members shall be open for 30 days. This 30-day voting window would replace the current fixed voting period, which ends on March 31. Establishing a voting period, rather than a fixed end date, takes advantage of flexibility available through modern electronic voting.

Article IV of the Constitution of ASEE clarifies procedures for the election of officers who serve on the ASEE Board of Directors and the succession of officers should an officer no longer be able to perform the duties of their office. Members of the ASEE Board of Directors occupy positions of significant authority that are accompanied by significant ethical responsibilities. All ASEE members are bound to the ASEE Code of Ethics. However, should ethical violations occur, the Constitution presently lacks language to clarify either the procedure for removal of a member of the ASEE Board of Directors or the succession of officers following such a removal action. These proposed changes to the Society’s Constitution clarify both of these procedures. Examples of behaviors that may lead to removal of a Board member include violation of the ASEE Code of Ethics or violation of criminal law. Should a case arise in which the confidence in any member of the ASEE Board were challenged, a two-thirds majority vote of all Board members would facilitate removal of that Board member from office. Succession of officers to fill the position would be as previously described in the Constitution in Article IV, Sections 7-10. 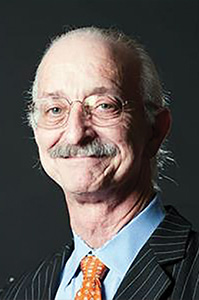 Woodie Flowers, an MIT mechanical engineering professor who was an influential proponent of hands-on engineering education at the college and K-12 levels, died October 11 at age 75.

An ASEE member for more than three decades, Flowers received the Society’s President’s Award in 2015 on behalf of FIRST Robotics, which he served as Distinguished Adviser and Executive Advisory Board member.

At MIT, where he was the Pappalardo Professor Emeritus of Mechanical Engineering, Flowers “was instrumental in shaping MIT’s hands-on approach to engineering design education,” the university said in a press release at his death. He developed teaching methods and learning opportunities that culminated in an annual design-and-build competition held for nearly 50 years. Throughout his career, he also designed above-knee prosthetics.

Raised in Jena, La., Flowers became interested in mechanical engineering and design at a young age, displaying a passion for both building and nature, and was an Eagle Scout. He earned a bachelor’s degree in engineering from Louisiana Tech University and an M.S. in mechanical engineering, an engineer’s degree, and a doctorate from MIT, which hired him as an assistant professor. Soon after inventor-entrepreneur Dean Kamen founded FIRST (For Inspiration and Recognition of Science and Technology) in 1989, he and Flowers collaborated on a robotics competition for high school students that began in 1992. Over the years, FIRST Robotics has grown to reach 660,000 students from more than 100 countries annually.

Flowers appeared in a 1981 PBS documentary Discover: The World of Science, and hosted the PBS series Scientific American Frontiers from 1990 to 1993. He was an ASEE member from 1979 until 2011.

Two longtime ASEE members—Salil Desai and Gisele “Gigi” Ragusa—are among the 15 recipients of the Presidential Award for Excellence in Science, Mathematics, and Engineering Mentoring. A third recipient, Amy Freeman, former president of the Women in Engineering Pro-Active Network, was a founding organizer of ASEE’s inaugural Collaborative Network for Engineering and Computing Diversity (CoNECD) conference in 2018. Announced on October 15, the award is the nation’s highest honor for mentors who work with underrepresented student populations and who play a crucial role in developing America’s future STEM workforce.

Desai, a professor of industrial and systems engineering at North Carolina A&T State University and interim codirector of the Center of Excellence in Product Design and Advanced Manufacturing, works on the frontier of nano-biotech and additive manufacturing. His targeted and sustained mentoring of African-American students—including engaging students in community service as adviser for the Alpha Pi Mu honor society—has led to a steady flow of minority engineers into industry, academia, and national laboratories, and helped earn him a top statewide teaching award in 2016 and ASEE’s 2017 DuPont Minorities in Engineering Award. His off-campus outreach includes explaining nano-biotechnology to K-12 students and the public via science shows, demonstrations, and podcasts for the Natural Science Center of Greensboro.

Ragusa, a professor of engineering education practice at the University of Southern California, conducts research on college transitions and retention of underrepresented students in engineering and works to improve access to STEM education and careers as chair of USC’s STEM Education and Research Consortium. A frequent presenter at ASEE’s Annual Conference—including an NSF grantees’ poster session this year on a nine-year study examining the impact of middle and high school teachers’ research experiences on student achievement—she has published more than 130 peer-reviewed papers, proceedings, and book chapters on subjects ranging from mentoring teachers to inspiring STEM interest in K-12 students from under-resourced neighborhoods. During the course of her career, according to USC’s tally, Ragusa has mentored more than 900 preservice and in-service teachers—more than half of them STEM educators—as well as 19 doctoral students, 8 postdoctoral researchers, and 320 community college and university faculty members. Her Inner City Civil and Environmental Engineering Academy, robotics programs, and other outreach efforts have involved over 7,500 preK-12 students and 500 undergraduates in STEM education.

The National Academy of Engineering’s 2019 Simon Ramo Founders Award was presented to Cato Thomas Laurencin “for fundamental, critical, and groundbreaking scientific advances in the engineering of tissues, guiding technology and science policy, and promoting diversity and excellence in science.” A leader in biomaterials, nanotechnology, stem cell science, drug delivery systems, and regenerative engineering. Laurencin is University Professor at the University of Connecticut, professor of chemical and biomolecular engineering, materials science and engineering, and biomedical engineering; endowed professor of orthopaedic surgery; and chief executive officer of the Connecticut Convergence Institute for Translation in Regenerative Engineering. NAE’s Arthur M. Bueche Award was presented to Roderic Ivan Pettigrew for leadership at the National Institutes of Health and “for academic and industrial convergence research and education, resulting in innovations that have improved global health care.” Pettigrew is CEO of Engineering Health (EnHealth) and executive dean for Engineering Medicine (EnMed) at Texas A&M and Houston Methodist Hospital. He was founding director of the National Institute of Biomedical Imaging and Bioengineering (NIBIB). Both winners have been featured in Prism.

All manner of small devices are powered by lithium-ion batteries, the Royal Swedish Academy of Sciences said in awarding the Nobel Prize for Chemistry to three researchers responsible for the breakthrough: John B. Goodenough, Cockrell Centennial Chair of Engineering at the University of Texas–Austin; M. Stanley Whittingham, a chemist who directs both the Institute for Materials Research and the Materials Science and Engineering program at Binghamton University (SUNY); and Akira Yoshino of Asahi Kasei Corporation and Meijo University in Japan. Energy Secretary Rick Perry says their work “will have a lasting effect on all of our lives as they drastically improve technology in everything from cellphones and laptops to pacemakers, electric vehicles, and grid resiliency.” Goodenough, a past member of ASEE who holds faculty positions in mechanical engineering and electrical and computer engineering, says his share of the prize “will go to my university to support the people who work there,” a Texas news station reports. Goodenough was profiled in the May 2017 issue of Prism.