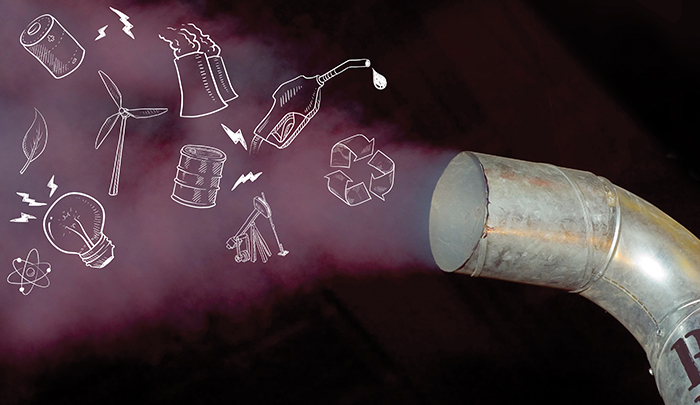 It’s a truth almost universally acknowledged that controlling greenhouse gas emissions – particularly carbon dioxide – is essential to slowing the pace of climate change and the extreme weather and rising seas that come with it. But for a growing number of innovators, the recognized method for doing so – basically capturing the gas emitted by sources such as coal-burning power plants and storing it in vast caverns – seems somehow uninspiring. Why pump all this CO₂ underground, they wonder, if you can harness it to get more fuel from the earth or to make new fuels and other products? Their emerging field has been variously called carbon capture and utilization (CCU); carbon dioxide utilization (CDU); carbon capture, utilization, and storage (CCUS); and carbon capture and recycling or reuse (CCR). But by whatever name, it is spawning start-up companies and generating new opportunities for engineers in multiple disciplines, including mechanical, chemical, petroleum, electrical, and systems.

“The idea of actually utilizing carbon dioxide and getting some benefit from it instead of just storing it away really appeals to many engineers and to many other people as well,” says Virginia Tech mining engineer Nino Ripepi, a specialist in productive uses of CO₂.

One strategy – rejuvenating oil wells — has been used for more than 40 years but is drawing new attention. It involves injecting carbon dioxide into declining oil reservoirs to both store the carbon dioxide and retrieve untapped oil. Carbon dioxide changes the physical properties of the oil, reducing its viscosity so a higher percentage of the oil can get recovered, says Thomas Buscheck, leader of the geochemical, hydrological, and environmental sciences group at Lawrence Livermore National Laboratory. Instead of just retrieving 40 to 45 percent of the oil in a petroleum reserve, carbon dioxide can boost that to 65 percent.

The method is already responsible for about 5 percent of U.S. oil production, and the Department of Energy estimates that it has further potential to add 60 billion barrels of crude oil to U.S. resources, which is three times current proven reserves. Three DOE-funded operations are expected to capture a total of 6.5 million tons of carbon dioxide per year by September 2015, and 5.5 million tons of that will be used for enhanced oil recovery.

At Virginia Tech, Ripepi and his colleagues are taking the method in a different direction, exploring how carbon dioxide could help enhance recovery of natural gas. The most significant reserves of natural gas in central Appalachia lie in coalbed methane wells, where methane gas adheres to the surface of coal. However, carbon dioxide has a higher affinity for coal’s surface than methane does, and injecting carbon dioxide into coal seams can liberate this methane. “You can both sequester carbon dioxide and enhance the recovery of methane from these reservoirs at the same time,” Ripepi says.

Of course, the ability to extract more fossil fuel while helping to sate the world’s growing appetite for energy will result in more of that fuel being burned. If this combustion, in turn, releases more greenhouse gas into the atmosphere, the net impact on the environment could still be harmful. But researchers suggest carbon dioxide could also improve the recovery of renewable and relatively clean geothermal energy.

An extraordinary amount of heat seethes below Earth’s surface, as erupting volcanoes violently demonstrate. Geothermal energy seeks to essentially mine this heat to generate power. All geothermal plants rely on hot vapors to help drive electric turbines — for instance, by tapping into hot water deep underground and bringing it up to run generators. Roughly 12,000 megawatts of geothermal electricity are currently produced around the world. Geothermal energy is available 24 hours a day, unlike wind energy, which relies on fickle breezes, or solar energy, which depends on daylight. And it is homegrown.

Until recently, geothermal energy was considered to be of limited use geographically because the best reservoirs are located in volcanically or seismically active places such as the western United States, where hot rocks are closer to the surface, requiring less drilling and thus lowering costs.

But Buscheck and other Lawrence Livermore researchers, along with collaborators at Ohio State University and the University of Minnesota, have found that carbon dioxide could help expand the reach of geothermal energy in the United States to include most states west of the Mississippi River. The concept involves pumping carbon dioxide into the porous sandstones and limestones of sedimentary basins to store the greenhouse gas permanently. These basins are not normally useful hot spots for geothermal energy. However, pressurizing the rock with carbon dioxide helps drive the flow of hot water to help recover it at much lower costs than before. “My goal is to make injection of carbon dioxide not a disposal process but an energy-harvesting process, to help wean our country and others of their dependence on fossil fuels and to help deal with the most compelling environmental issue we face today,” Buscheck says.

In addition, this strategy would circulate some of the carbon dioxide within the system. Carbon dioxide is much better at pulling heat from hot rock than water, so it can help extract heat from areas conventional geothermal power could not. A start-up firm spun off from the University of Minnesota, Heat Mining Co. expects to have an operational project based on this approach in 2016, Buscheck notes.

“I think this approach can have a lot of opportunities for engineers, but we have to demonstrate successful commercialization first,” Buscheck adds. “If these ideas perform half as well in the field as they do in computer simulations, we’ll be doing quite well.”

Instead of using carbon dioxide to recover fuel, many researchers want to turn it into one. Methanol is high on their list. “It’s the cleanest burning fuel known to mankind,” says synthetic organic chemist Surya Prakash, director of the University of Southern California’s Loker Hydrocarbon Research Institute. “It’s an excellent high-octane fuel for internal combustion engines — racecars use methanol. Since it is liquid at room temperature, it can easily be stored and transported using existing infrastructure. Methanol can also replace diesel, if one converts it to dimethyl ether, or DME. DME is also used to cook food in China. Methanol is also a very good fuel for use in fuel cells to make electricity. And methanol can also be converted to ethylene and propylene, which can then be used as feedstocks to make polymers and pharmaceuticals.”

At Princeton University, Andrew Bocarsly and his colleagues employ electrochemistry to create fuel from carbon dioxide. “Basically, we take seltzer — carbon-dioxide-saturated water — and run it past two carefully selected electrodes,” Bocarsly explains. “We also add another molecule, a catalyst. We apply an electrical current to the electrodes, and the electrochemical reaction between carbon dioxide and water generates products such as methanol, formic acid, oxalic acid, and butanol. These are molecules that could be used to make liquid fuels that one can burn, or be used in fuel cells to generate electricity.”

The electricity needed to drive these reactions could come from renewable sources such as solar and wind power. This strategy could therefore help these intermittent sources of power generate energy sources usable whenever people want them. Bocarsly co-founded a company, Liquid Light, to commercialize this research.

Another approach to creating fuels and materials from carbon dioxide used by researchers at Arizona State University in Tempe and collaborators involves photosynthetic microbes such as algae and cyanobacteria. The microorganisms are simply given sunlight, carbon dioxide and water, and are good candidates for mass production of biofuels because they are far more efficient at capturing sunlight energy than terrestrial plants.

“In the case of algae, the avenue we’ve spent the most effort on is to grow the algae as rapidly as we can,” says chemist Gary Dirks, director of Arizona State’s Global Institute of Sustainability and the LightWorks Initiative, a multidisciplinary research effort that aims to harness solar energy for a broad spectrum of technologies. The algae are then broken up, and oily energy-rich molecules known as lipids are separated out. Any sugars and proteins that remain are converted via fermentation into other energy-rich molecules such as ethanol and butanol. “In that way,” says Dirks, “substantially most of the algae ends up as energy molecules.” The Sustainable Algal Biofuels Consortium led by Arizona State University received $6 million in federal funding and $1.5 million from industry. “In the case of cyanobacteria, one route is much the same — the bacteria get disrupted, the lipid components get removed, and the remaining components get converted to biogas,” Dirks says. “In a quite different approach, a genetically modified strain of cyanobacteria excretes lauric acid, which can get harvested and converted into a fuel that can easily be included in, say, diesel. Cyanobacteria may also be used to make precursors for polymers that can go in materials such as surfactants.” The project to use cyanobacteria for fuel received roughly $6.8 million from the Department of Energy.

German scientists first attempted to produce oil from algae during World War II, and the Department of Energy’s Aquatic Species Program first sought to use algae to make oil during the 1970s energy crisis. “What’s different now is the sense of urgency due to climate change,” Dirks says. “Carbon dioxide is not just interesting as something we can recycle; it’s something we need to recycle.”

Beyond fuel, researchers are finding new ways to use carbon dioxide in making plastics. For decades, such efforts faced a series of problems such as expense, or the need for high temperatures and pressures. Novomer, a new company in Ithaca, N.Y., founded by Cornell University chemists Geoffrey Coates and Scott Allen, has found a way to use catalysts made from inexpensive cobalt and reactions that occur at normal temperatures and pressures to create plastics and other compounds from carbon dioxide. “The materials we make are between 40 and 50 percent weight carbon dioxide,” Allen says. “This is still a very new field. There are not many companies in the world commercializing this technology, and being part of the beginning of this industry is very exciting.”

If Novomer and other start-ups prove to be viable, they will need engineers of all stripes. Methanol alone promises “lots of opportunities” in chemical and petroleum engineering, says

Prakash – for instance, “how to build fuel and feedstock plants that make and use methanol in large quantities.” New companies could also sustain research, helping to solve what has been the number one challenge in the field of carbon dioxide utilization: “Where do you get the money to pay for all this stuff?” as Dirks asks. “Reuse of carbon dioxide is not yet a trendy thing in the funding agencies.” Even if it were, researchers acknowledge that efforts to recycle carbon dioxide will not by themselves solve the problems CO₂ poses for climate, as the amount of the gas people release vastly outweighs the amount people could use. “There are 30 billion tons of anthropogenic carbon dioxide released every year into the air,” Prakash says. “We can only utilize a fraction of that at best.” Still, Cornell’s Allen argues that recycling CO₂ can be a piece of the puzzle in controlling greenhouse gases. As he says, “It’s going to take a number of different technologies to make an impact.”

Charles Q. Choi is a science writer based in New York.