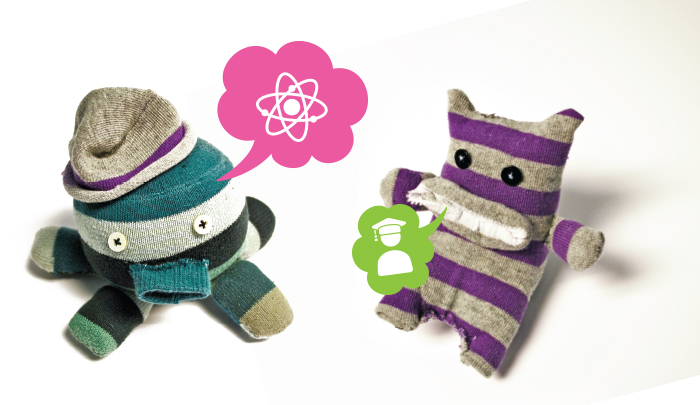 There are engineering problem sets, and then there’s the brain-wracking homework assignment that structural engineering specialist Jim Hanson springs on his construction class at Rose-Hulman Institute of Technology. The students’ challenge: Develop detailed plans to pave a path through the rain forest, minimizing its environmental impact. “If I’m going to expect creativity, it means I have to teach them how to be creative,” says the associate professor of civil engineering, who is “awed by how outside the box” his undergraduates can think when asked to apply as much imagination as technical knowledge. “I love helping to guide them, but the epiphany at the end is theirs.”

Hanson is hardly the only engineering faculty member channeling James Joyce these days. Taking to heart the National Academy of Engineering’s Engineer of 2020 declaration that “engineering is a profoundly creative process,” educators have found that innovative – even quirky – techniques can spark those eureka moments. Haiku and art projects inspire creative thinking about biomedical technologies. Analysis of op-ed articles reveals faulty evidence and logic.

“Passion is the strongest driving force in learning,” explains Pennsylvania State University environmental engineering professor emeritus Jack Matson, who assigns fun but nearly impossible tasks – such as proposing marriage to total strangers – to defuse students’ fear of failing and catalyze their creativity. “Once that happens, wow!”

On several campuses, creativity is now part of the core curriculum. Starting last fall, Stanford University requires at least one course in “creative expression.” The University of Kansas and City University of New York require courses or experiences in creative thinking for all students, while Bryant University freshmen spend three intense days doing hands-on team activities in a required seminar called Innovation and Design Experience for All. Few institutions are as far along as the University of Kentucky, which developed introductory courses like Creativity and Design in Electrical and Computer Engineering as part of an overhaul of general education requirements.

Creativity tops competencies CEOs deem essential for future leaders, and a recent Stockholm School of Economics study links it directly to success in product development and marketing. Creativity also ranks high with engineering students, with 87 percent deeming it a necessary skill in a survey cited in the October 2011 Journal of Engineering Education. Yet many engineering students don’t recognize the connection. Larry Richards, a University of Virginia professor of mechanical and aerospace engineering and ASEE fellow, says that until recently, none of his introductory students could name a single creative engineer. “Over 400 first-year students, and there was dead silence,” recalls Richards.

“Engineering is essentially a creative subject, and yes, it can be taught – it’s a set of skills,” argues Darrell Velegol, distinguished professor of chemical engineering at Penn State, who launched a massive open online course (MOOC) on creativity, innovation, and change last fall with colleagues Matson and Kathryn Jablokow, an associate professor of mechanical engineering and engineering design. “I tell my students we have a diversity of problems in the workplace and it takes a diversity of problem solvers to solve them,” explains Jablokow, noting that all humans are creative, “but we are creative in different ways.” To help students identify their brain’s “sweet spot” for approaching problems, she has them craft “creativity diversity résumés.” Some find they favor Edison’s meticulous testing of thousands of potential light-bulb filaments. Others gravitate to less structured approaches to design. Their ideas needn’t be wild to be creative. “If we only thought revolutionary and radical, we’d only solve some of our problems,” cautions Jablokow.

Radical rethinking can stimulate ingenuity, however. William Hyman, a biomedical engineering professor emeritus from Texas A&M now teaching as an adjunct at New York’s Cooper Union, sometimes leavens his upper-level courses with art assignments and haiku – a 17-syllable Japanese poetry format he has enjoyed since high school. A sample from his biomaterials class reads: resorbs are good/nontoxic to our bodies/but harm in excess. Hyman recalls such art projects as a crocheted heart-plus-pacemaker and the blues song one student composed and played on the guitar. “It makes you think about some piece of the subject matter in a new way and exercises a [different] part of the brain than might otherwise be the case.”

To cultivate their students’ creativity, engineering educators have had to think creatively, too. Challenged to provide robust, hands-on experiences for 180 first-year students in a regular classroom, Rob Adams, associate professor of electrical and computer engineering at the University of Kentucky, looked to other schools but found none with an explicit emphasis on creativity. So he developed modules around four technical areas — such as signals processing — with online projects, brainstorming lessons, and embedded exercises to reinforce concepts. The class meets twice a week, with the first covering creativity and creativity case studies, and the second a hands-on lab designed to encourage innovation. There are no textbooks; instead of a final exam, there’s a final project. Students also take the Torrance Test of Creative Thinking to arrive at a common notion of deep creativity. Adams found his freshmen’s accomplishments “flabbergasting.” One freshman team won a regional IEEE paper contest with a music-playing resonator made from salvaged VCR components.

Creativity has been a serious subject for researchers. Funded by the National Science Foundation, University of Michigan chemical engineering professor H. Scott Fogler and Steven LeBlanc, a University of Toledo chemical engineering professor and former chair of ASEE’s Chemical Engineering Division, studied the problem-solving techniques of creative engineers at Dow, DuPont, and other engineering firms. Strategies for Creative Problem Solving, which earned ASEE’s 1996 Meriam/Wiley Distinguished Author Award, distills their findings into an engaging series of brainteasers and structured critical-reasoning exercises. Students learn to frame problems by analyzing opinion articles for bias, false assumptions, and gaps in logic, and follow Toastmasters-style training to build presentation skills. The textbook lists practical tips to improve creative ability, including jotting down ideas when they strike, pursuing hobbies and courses outside one’s specialty, and reading trade journals to avoid trying to solve today’s problems with yesterday’s technology. A section on identifying conceptual blocks to creative solutions includes this gem from Stanford engineering professor emeritus James Adams’s pathbreaking work: Urinating in public, while unconventional, offers an easier way to extract a ping-pong ball from a hole than improvising a tool.

Perhaps the biggest obstacle to creative problem solving is fear of failure, contends Penn State’s Matson, founding director of the school’s Leonhard Center for Enhancement of Engineering Education. To remove the stigma associated with setbacks and encourage risk, Matson assigns fun-but-challenging tasks with a less than 1 percent chance of success. Take the bad-art project. Matson not only demanded “ridiculously bad” works, he made students exhibit and hawk their masterpieces to potential buyers. “The point is not to live a life of failure; it’s to try things out because that’s the best form of knowledge you can acquire and prevent big failures,” he says.

Colossal snafus are among the case studies that Rose-Hulman’s Hanson has his class ponder. Students might probe the collapse of a building, taking a virtual field trip through news reports to view the construction and figuring out what could have gone wrong. “There’s a lot more to it than just plugging in numbers,” says Hanson.

Michgan’s Fogler assigns term projects that require teams to use many of the techniques learned in class to identify and solve a problem for a local café or other business. Visit the place at different times of day, he recommends, but don’t tell the owner you’re coming. Find the spoken and unspoken problems, and compare solutions. The projects culminate in 45-minute presentations to the clients, who bestow half the marks. Among student recommendations to Ann Arbor’s eateries: a motion-activated light switch in a coffee shop bathroom and a layout redesign to place laptop users near electrical outlets.

Students in Larry Richards’s capstone design class at the University of Virginia go out and take note of good and bad design, evaluating what works and what doesn’t; conduct patent searches to avoid repeating inventions; and survey customers after learning how to structure questions to elicit useful information. A favorite outside speaker is alumnus Evan Edwards, a food-allergy sufferer who grew his capstone project idea – an epinephrine-delivering device that could fit in a wallet – into a company that recently sold the manufacturing and commercialization rights to a leading pharmaceutical firm for millions.

Even short thought experiments that Rose-Hulman’s Hanson assigns, such as describing how to build a paved sidewalk through the rain forest, can unlock more creativity when there’s a human connection. To encourage students to “think beyond what you know,” Hanson warns that there are no books or online articles with the answers and urges them to call someone experienced in sidewalk construction, pointing them to the yellow pages to find hometown contractors.

Despite industry’s demand for innovative thinking, academic structures from grades to accreditation requirements to disciplinary silos may discourage creativity. During an ASEE-run workshop, Transforming Undergraduate Education in Engineering, participants argued for replacing “canned,” easily graded assignments with more authentic engineering experiences. Some engineering educators suggest that the accrediting process deserves updating to encourage creativity. Assessments require their own form of creativity. Kentucky’s Rob Adams uses lots of peer evaluations, scoring individual and group creativity on a scale of zero to 10. He also brings in other faculty members or graduate students to evaluate final projects. Penn State’s Velegol grades on “the number and intensity of thoughts” and what teams learn from each other, not just the final project results.

Beyond boosting engagement and confidence, courses that stimulate creative thinking can ultimately mean higher starting salaries and broader career opportunities. Jack Matson says students who take them tend to be “creative in the interview process” and accept jobs with start-ups and consulting firms like Accenture. One alumnus is a talent evaluator for a pro football team. But outside-the-box thinking won’t serve graduates in every circumstance. William Hyman notes that to win Food and Drug Administration clearance, most medical devices must demonstrate how similar they are to those already available. He ruminates, “Do we really want everyone to be disruptive?”