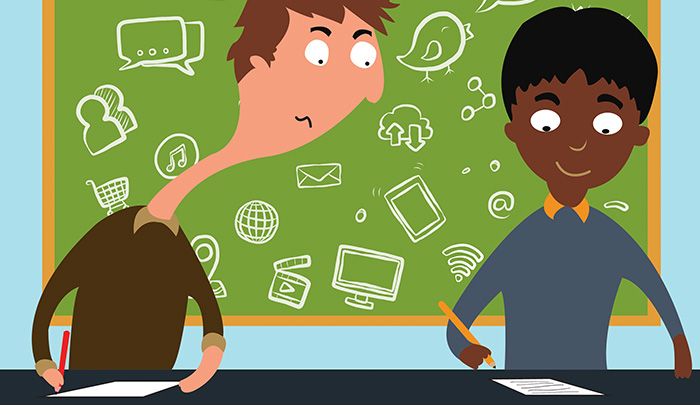 From texting to tardiness to cheating, incivility and misconduct can disrupt learning. Here are some tips for controlling a class.

Thomas Shepard beams out at his audience of junior faculty members before delivering some unvarnished advice that he could have used as a new teacher. “How many of you have had students cheat on homework?” he asks. Most hands shoot up. “What about on finals?” About 20 percent indicate yes. “No school is immune,” says the University of St. Thomas engineering professor, warning that academic misconduct, requests for extensions or accommodations, tardiness, and other everyday hurdles can “nickel-and-dime your time” to the point of detracting from teaching, research, and service.

Ask instructors to name their biggest challenge, and classroom distractions very likely would top most lists. Even experienced engineering educators must compete for students’ attention against social media and texting. Classroom management has become so vexing that ASEE’s 2014 annual conference devoted several sessions to the topic, including Shepard’s panel presentation, “I Did Not Anticipate This: Experiences From the Early Years.”

Research has documented an increase in disruptive behavior and cheating by students over the past 20 years. And it’s not just among weaker students. So intense has grade pressure become that top GPA earners are also found to cheat. Engineering is cited as among the top five disciplines for misconduct, with some 80 percent of engineering majors reporting having cheated at least once. (Only business students were higher.) “Faculty come to higher education well versed in their subject matter but largely unprepared to successfully confront and manage disruptive behavior,” observe Jumoke Oluwakemi (or “Kemi”) Ladeji-Osias, an associate professor of electrical and computer engineering at Morgan State University, and her colleague, Anita M. Wells, in a conference paper.

What students consider cheating can vary even within departments. A study by Gouranga Banik, chair and professor of civil and architectural engineering at Tennessee State University, found that construction management majors were less likely to see anything wrong with taking an exam for someone else than the department’s undergraduates as a whole.

The changing format of the modern engineering classroom, which spans traditional lecture halls to online courses and “flipped” classes, only exacerbates the challenge of maintaining decorum. Some schools have beefed up teacher training programs. Last year, for example, Morgan State’s Ladeji-Osias led a 90-minute in-service workshop on best classroom management practices with the university’s counseling director. The session, which included scenarios for handling students who were rude or violent, or who seemed to be drunk or on drugs, revealed that some faculty had limited awareness of common mental-health conditions and that engineering students often used counseling services a lot.

Such experiences are beginning to yield some research-proven rules of thumb, however. Here are some tips for ensuring a productive classroom environment:

1. Halt bad behavior before it starts.

“Set the expectations early,” in writing and verbally, recommends Ladeji-Osias, who says policies and requirements should be communicated on the first day of class. “You can always loosen up, but you have to establish what the boundaries are.” The syllabus, for example, should direct students to university resources where they can learn more about academic expectations and penalties for misconduct. Signal your intention to use plagiarism-detecting software on written and computer-programming assignments. Emphasizing the professional and ethical responsibilities of engineers, as ABET requires, also helps build a communitywide sense of right and wrong.

Research shows that students are more likely to rationalize misconduct if they feel the instruction is poor, lecture confusing, or workload unreasonable. Underscoring the relevance of the material and learning objectives can boost motivation and reduce the urge to cheat, says St. Thomas’s Shepard, who goes over the university’s academic-

integrity policies and explains the consequences of cheating along with the syllabus. Give students “time to read the policy word for word on the first day of class,” and answer any questions, he says. Faculty also should “make a point to read and understand their university’s academic misconduct policy” as well as know their authority to fail or otherwise penalize cheaters.

Katie Siek, an associate professor of informatics and computer science at Indiana University, finds that cheating in her project-based classes typically comes from students “borrowing” code or coasting on their teammates’ coattails. To combat the former, she makes students complete the university’s plagiarism test during the first week of school. Peer reviews in which teams must divvy up an imaginary $1,000 bonus have eliminated the latter by compelling students to justify their contributions.

Faculty who get to know their students tend to have less conflict in the classroom or hostile discourse online, report Morgan State’s Ladeji-Osias and Wells. Calling on students by name makes an instructor seem more approachable and thus more likely to gain their respect. Large lecture class? Scheduling time to meet individually with students can foster rapport.

Classes that include peer-to-peer learning have fewer incidents of rude or unethical behavior, research indicates, because students tend to take more responsibility and hold each other accountable. Active learning and small-group work can reduce chatting and inattentiveness even in large classes, say Ladeji-Osias and Wells.

Bridget Smyser, an assistant academic specialist and director of Northeastern University’s mechanical and industrial engineering labs, has students in her third-year Measurements and Analysis course do two or three in-class activities per lecture. “That helps with keeping people focused on the lecture,” she explains. Smyser also walks around “a lot,” checking to see who’s lost, finished, or merely absorbed in technology – like the student she caught watching a hockey game.

4. Make it harder to cheat.

The availability of solutions to textbook problems on the Internet makes it hard for engineering educators to directly address cheating on homework – typically an issue with first- and second-year students. St. Thomas’s Shepard points to research on the value of ungraded assignments, increasing the weight of projects, and either writing your own questions or swapping problems with instructors at other schools. Other studies have found that giving harsh warnings against cheating right before a test can reduce transgressions by 13 percent, with a 25 percent drop for writing multiple versions of a test. Meanwhile, plagiarism-detection software can cut down on copy-and-paste essays or computer code.

Despite studies to the contrary, texting and surfing the Web aren’t considered distractions – or rude – by today’s digital denizens. Indeed, many students view smartphones and tablets as essential tools. A new Baylor University study of campus cellphone use revealed that female undergraduates log an astonishing 10 hours a day, and their male counterparts nearly eight. “Addictions to this seemingly indispensable piece of technology become an increasingly realistic possibility,” noted lead researcher James Roberts, a business professor.

To minimize withdrawal pains, Indiana’s Siek has the class spend Day One discussing and then voting on what the rules and consequences should be for “disruptive technologies.” The most successful has been a two-minute texting/phone/email break in the middle of class – which is only 50 minutes long. “Everyone respects the rule,” says Siek. Another class voted to make violators “sing your text” or website. “I only had to enforce the rule once and students stopped,” she reports.

Some schools, such as Clemson, have a faculty and student “bill of rights” that includes guarantees of civility.

Studies suggest that multitasking splits attention and impairs learning. Northeastern University researchers, for example, found that freshman engineering students who texted and surfed the Internet performed worse on content-retention tasks than their undistracted peers. Yet tablets, smartphones, and other mobile technologies also can be used to promote deeper engagement and understanding.

Northeastern’s Smyser, who got a smartphone only earlier this year, saw absences plummet, engagement soar, and scores on certain in-class activities improve after she began permitting tablets and other technology in her Measurements and Analysis course. Her paper, “Please Play With Your Phones,” describes the evolution from a calculators-only policy in 2010 – which made in-class problem solving tedious and error-prone – to encouraging students to bring their own devices. They now take notes on tablets, use smartphone accelerometer apps to track their commute to class and graph the data, and conduct hands-on mini-experiments using other free measurement apps. Students also use their smart devices in independent projects – all without the college needing to invest heavily in infrastructure. The benefits of being able to troubleshoot in class are “huge,” says Smyser, who recently added a polling tool called Top Hat that can handle open-ended questions. The ability to get instant feedback and correct misconceptions, she says, “means 20 fewer people sending me email and knocking on my office door” with questions.

Faculty and students agree that ignoring incivility is the least effective approach for halting it. Ladeji-Osias and Wells recommend confronting inattentive students in private or refocusing the class by using think/pair/share or other active-learning techniques. “Be willing to end the class,” they advise, noting that severe disruptions, such as threats of violence, may leave faculty members no option but to stop the lecture and contact campus security.

In their teaching workshops, Richard M. Felder, a retired chemical engineering professor from North Carolina State University, and his wife, Rebecca Brent, ask participants to brainstorm responses to such everyday disruptions as students strolling in late, chatting loudly, or sleeping. Suggestions typically include ignoring the problem, throwing chalk, or ejecting the miscreants. Ironically, no one ever recommends asking the offenders politely but firmly to stop their rude behavior. “It’s almost as if instructors don’t know it’s legal to do it,” wrote Felder and Brent in a column. “It is legal. And it works.” So does embarrassment. To tune out that hockey game, Northeastern’s Smyser needed just one word: “Really?!”