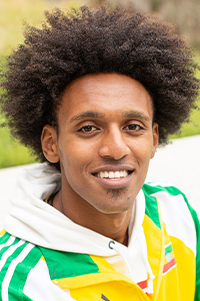 I’ve always dreamt of studying in Africa, particularly in Ethiopia, my parents’ birthplace. But despite my typical resourcefulness, I was never presented that opportunity. So instead—knowing I needed a change in perspective—I settled for a semester-long foreign exchange program with the University of Navarra in San Sebastián, Spain. Over four months in Europe, I received an excellent engineering education, experienced the perspective shift I anticipated, and had the time of my life.

Why did I need to study abroad? In all honesty, I needed a break from my predominately White institution (PWI)—a productive sabbatical of sorts—in order to complete my blended bachelor’s and master’s five-year program. A Black alumnus of my school said it best: “Attending a PWI is like four years of Get Out [the movie]!” But one thing was missing from my so-called “international” engineering experience: Black people.

It’s clear: Black engineering students—who are few to begin with—rarely study abroad, and even if they do, it’s almost never in Africa. Meanwhile, engineering programs at PWIs across America continue to struggle to recruit and retain African American students.

In order to increase recruitment and retention of Black students, I believe that engineering programs at PWIs should establish foreign exchange programs with the best universities in West Africa. This opportunity could enhance Black engineering students’ sense of belonging. It could be the encouragement a young Black scholar needs to finish their degree. Imagine—for once in your life—being in a classroom where everyone looks like you. Sounds like heaven to me!

For clarification, I’m particularly talking about students taking engineering courses, not general education. I also emphasize exchange because I think that each participating university should send roughly the same number of students they receive. This opportunity would offer West African engineering students world-class exposure in their respective disciplines while providing the host campuses with invaluable outside perspectives. This could be the spark a young African scholar needs to address concrete engineering challenges for their community back home. Imagine—for once in your life—being in a classroom where your physical presence reaffirms your worth in society. Sounds like heaven to me!

Naysayers may think that Africa has no access to technology or modern infrastructure. That’s no excuse. Several West African countries have accredited engineering programs. The University of Ghana’s department of computer engineering has programs in computer and intelligent systems, communication and network systems, and control and automation systems. Nigeria’s Covenant University boasts a plethora of publications within its chemical engineering department. Meanwhile, its petroleum engineering department hosts international student interns. And if administrations argue that procuring visas for West African students is too difficult or expensive, then that is the ultimate example of racism in the form of an institutional barrier!

I also believe the American universities should cover travel and visa costs for the visiting students. This would result in an initial loss of capital for America’s universities, but increased Black enrollment would help cover it over time. But why are we even thinking about our education systems with a for-profit mindset in the first place? Besides, America has been due to pay slavery restitutions for a long time. Offering education, in the form of Black land-grant colleges with the Morrill Act in 1890, was a start, but there’s still a long way to go. This is why I’m specific about focusing on West Africa initially, even though my personal dream was to study in Ethiopia.

There are several undiscussed angles to my proposal: faculty participation, non-Black student participation, expansion to other African regions, and global equality gaps. These still need addressing. I do believe any engineering student, regardless of their race, would benefit from an exchange program in West Africa. But waiting to implement it due to complexity would be a slap to the face of current and future Black engineering students.

Just some food for thought…you do the dishes.