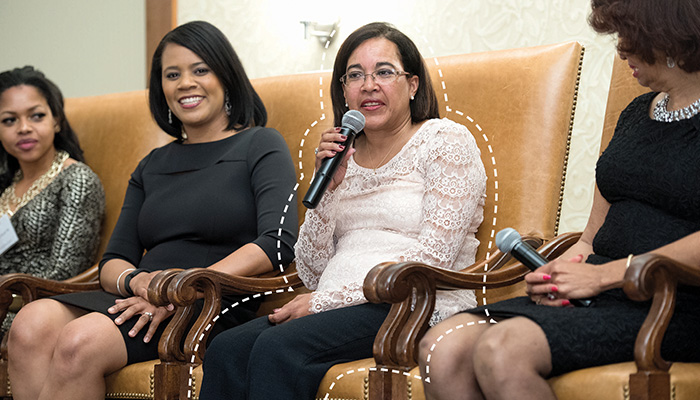 Bevlee Watford’s advice to a struggling student sums up her mission as an educator and activist on behalf of underrepresented minorities: ‘Work with me. You can make it.’

When becoming a mining engineer meant being the only African-American in a department of about 100, Bevlee Watford was ready. When paying for school meant working summers and winters—at one point shoveling coal in Pennsylvania—she did it. When her passion for counseling students—particularly women and minorities—meant abandoning a tenure-track job, taking a pay cut, and starting a new program from scratch, she jumped at the chance. And when a
Supreme Court ruling threatened the program’s survival, she saved and even expanded it.

The career of ASEE’s 2017–18 president, the first female African-American to hold the title, offers multiple examples of seizing unfamiliar challenges, overcoming obstacles, and building durable institutions with the capacity to change lives. Along the way, this no-nonsense trailblazer has made a lasting impact on students at Virginia Tech, where she is a professor of engineering education and associate dean for academic affairs, and become a leader of—and role model for—champions of diversity in ASEE and beyond.

If success in engineering for women, blacks, Hispanics, LGBT students, and those with disabilities is a matter of social justice, Watford has an additional take. She’s fond of quoting Bill Wulf, former president of the National Academy of Engineering, who contended: “Diversity is essential to good engineering!” Varied life experiences of men, women, people from different ethnic backgrounds, and the handicapped, he argued, represent “the gene pool out of which creativity comes, out of which elegant engineering solutions come.” Within ASEE, Watford grew frustrated when nothing came of a 2002 diversity plan. When she later chaired a Society Diversity Task Force, she made sure that it resulted in a strategic plan, a standing committee, and a website.

As a longtime Hokie, Watford smiles at the memory that when her high school guidance counselor suggested that she apply to Virginia Tech in Blacksburg, then known as Virginia Polytechnic Institute, she had never heard of the school. One of its draws was cost: It was cheaper even for an out-of-state resident than going to one of the State University of New York schools in her home state. Watford knew she would have to pay her own way, so she established a routine: attending the fall semester, working the winter, returning to school in the spring, and going back to work in the summer. That included shoveling coal in a mine south of Pittsburgh. The stint fit nicely with her undergrad major in mining engineering, where she was the only African-American student and one of four women out of a department of roughly 100. “It was very hard labor,” she recalls, but fellow mineworkers “didn’t make us do any more than we could handle.”

Graduating in 1981, Watford contemplated doing an M.B.A., but a faculty member urged her to consider a graduate degree in industrial engineering and operations research. She met Prof. Timothy Greene, who had just received a grant to study coal transportation from West Virginia to Norfolk, Va. Trouble was, Greene didn’t know anything about coal—“not a dang thing”—so he hired Watford and served as her adviser for both her master’s and Ph.D. She was the first black female from the College of Engineering to earn advanced degrees in those fields.

Accepting a tenure-track job at Clemson, Watford soon found that she did not like doing industrial engineering research and publications. “What I really enjoyed,” she recalls, “was working with students and helping them succeed. Just being there, being someone students could come and talk to and share their issues and concerns with and see me as a role model made me feel that I could make a real difference in their lives.” Her first National Science Foundation grant at Clemson created a summer program introducing high school students to engineering. She also became friends with Sue Lasser, now an academic enhancement counselor at Clemson, who founded and directed Programs for Educational Enrichment and Retention (PEER) to reach out to underrepresented minorities. Greene, meanwhile, hoped to entice Watford back to her alma mater, tailoring a position of director of Minority Engineering Programs at Virginia Tech to fit her background and abilities. Watford grabbed the opportunity. “That was exactly what I wanted to do.” She did so despite a warning from the president of Clemson that she was making a “tragic career move”—and despite taking a pay cut. It was, Greene recalls, “one of the best decisions Virginia Tech ever made.”

Besides support from Virginia Tech colleagues for her new venture, Watford says, “I gained a lot of knowledge from the professional community, particularly the National Association of Multicultural Program Advocates (NAMEPA) and the Women in Engineering ProActive Network (WEPAN). These are professional organizations of people doing the job I was tasked with doing. They helped me understand best practices and how to build a program from scratch.”

Watford began with a peer-mentoring program for black students before expanding her initiative to include similar programs for women and Hispanics. She is particularly proud of Hypatia, a living-learning community of 300 women who live and work together in engineering. In the first year after it was created in 2001, the graduation rate of female engineering student participants increased by 20 percent.

She also spearheaded Imagination, a one-week math and summer camp for seventh and eighth graders to do hands-on activities with science and technology; a Pre-College Initiative (a collaboration with Virginia Tech’s National Society of Black Engineers chapter) that includes five daylong events to help students prepare for the college application process; and Women’s Preview Weekend, which enables women who have been offered admission to the College of Engineering to spend a weekend staying in residence and meeting people from the community.

One student who quickly came to appreciate Watford was Tres Wooldridge, an African-American mechanical engineering student who entered Virginia Tech the year before Watford returned to the school in 1992. “At the time, I was a student who was really struggling,” Wooldridge remembers. “I had a tough time adjusting to university. I didn’t have a network that could help me get through college. I thought of quitting.” He adds, “When I first met Dr. Watford, I was complaining about how bad the system was set up and I didn’t think I could make it. She pulled me into her office and said, ‘Work with me. You can make it.’ That was a game-changer for me. She started putting programs in place and putting me in touch with mentors who could help me. I can guarantee you that was one of the main reasons I ever graduated.”

That inspired Wooldridge to become a mentor himself in one of
Watford’s programs. “I saw what Virginia Tech was like before she showed up and I saw what it was like after she showed up, and I had to be a part of it. Mentors for incoming freshmen, summer camps—I was all into it, man. I was able to take the knowledge I had and impart it to others. That not only provided a sense of fulfillment; it also tapped into leadership skills I was able to use later on down the line. I couldn’t have known that at the time, but it would have a big effect on my life.” Watford put Wooldridge in touch with a contact at Corning for an internship. “Today, I’m in my 21st year working at Corning as a plant manager of cable components in Phoenix. It wouldn’t have happened without Dr. Watford, and I bet you many other students have similar stories about her.”

The whole program was almost dismantled following the Supreme Court’s 2003 decision in Grutter v. Bollinger, launched by a white student who contended she had been denied admission to the University of Michigan Law School because of race. While the court sided with Michigan, the ruling prompted institutions to rethink programs aimed solely at minority students. Virginia Tech rallied, expanding the program to include every student and renaming it the Center for the Enhancement of Engineering Diversity (CEED). Now, instead of supporting 350 to 400 students, CEED caters to a majority of the entire freshman class of more than 1,300 students.

Richard Benson, president of the University of Texas at Dallas who was Virginia Tech’s engineering dean from 2005 to 2016, found out firsthand about the inclusive nature of CEED. “I’m a white male with a white male son who just graduated from Virginia Tech this May. Like a lot of new students, he found engineering tough and he needed help—and he got it from some of the superb programs that Bev has put into place. I was already a fan, but it was pretty powerful to revisit those programs through the eyes of a father.” He adds, “Bev is absolutely the best in making sure that students achieve success. Her son, Devon, graduated from Virginia Tech and daughter, Leah, next year, and Bev has almost a mother’s interest in kids doing well. She has had a colossal impact on student success at Virginia Tech.” Just before he left Virginia Tech, Benson was instrumental in Watford’s receiving the school’s 2016 Presidential Principles of Community Award.

In 1997, Watford took on a second job at Virginia Tech: associate dean of engineering for academic affairs, which she says involves “everything from recruitment and ABET to teachers and curriculum.” This is someone who Sue Lasser says “crackles with energy—a really positive person.” Benson calls her “a real dynamo—someone who works incredibly hard and incredibly well.”

While veering away from the research-and-publish grind early in her career, Watford found a niche in scholarship by collecting data and documenting results of her Virginia Tech initiatives and pulling in millions of dollars in external funding. She twice served as a NSF program director, most recently of the Broadening Participation program within the Division of Engineering Education and Centers, and is profiled along with other “pioneers” of engineering education research by the University of Washington’s Center for Engineering Teaching and Learning.

Louis Martin-Vega, who worked closely with Watford when he was president of ASEE and she was president-elect, says that he has seen up close the range of what Watford has accomplished. “The world of engineering education, the world of increasing participation of underrepresented minorities, the world of women in engineering—Bev cuts a wide swath. She has tremendous determination and consistency and has followed the beat of her own drum.”

Martin-Vega describes her election as a “real milestone. There are people out there who will be very proud of the fact” that ASEE has elected its first African-American female president. “It is meaningful to a whole segment of the population—people who can point to that and say that there has been a breakthrough and I too can aspire to achieve something great.”

Among Watford’s goals as president, as spelled out in her Candidate’s Statement, is to build on ASEE’s relationships. “I see the president as having a key role in enhancing partnerships with strategic organizations to achieve real and lasting change,” she wrote. On receiving the gavel, she announced that ASEE will co-host the First Annual Conference of the Collaborative for Inclusion and Diversity in Engineering and Information Technology—a conference intended to bring together all those working to achieve increased participation for underrepresented groups. This promises to be an active year.