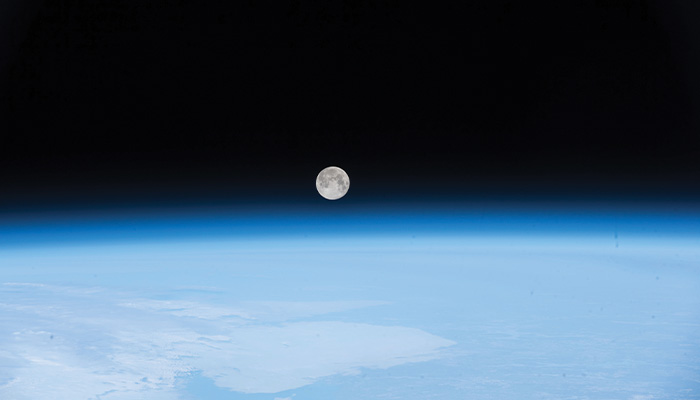 A White House directive has NASA recalculating the route toward human exploration of the solar system.

“The Eagle has landed.”
Nearly half a century after Apollo 11 astronaut Neil Armstrong announced humanity’s historic leap onto the moon’s tranquil surface, manned lunar missions have rocketed back atop NASA’s to-do list. This time, however, explorers will leave behind more than a flag and footprints. Their new brief: Establish a permanent outpost that one day could enable human expeditions to Mars and beyond.

Propelling NASA’s shift in focus is President Trump’s Space Policy Directive-1. Issued back in December, it sets the space agency on an ambitious course to first put up a mini-space-station and then, using that platform, build a sustainable base on the lunar surface. In addition to facilitating long-term exploration of Earth’s nearest neighbor and opening fresh commercial frontiers, the outpost would shore up America’s preeminence in aerospace engineering while creating a test bed—and pit stop—for interplanetary travel.

NASA Administrator Jim Bridenstine likens the effort to the development of the transcontinental railway system and subsequent economic expansion in the decades following Lewis and Clark’s odyssey of discovery in the early 1800s. “Forty-nine years after Apollo 11, it’s time to build our own railroad,” he told the Humans to Mars Summit in May. Far from representing a major redirection of resources, he reassured the group, America’s return to the moon “will allow us to prove and advance technologies that will feed forward to Mars,” such as precision landing systems, methane engines, and long-duration life support systems. If all goes to plan, NASA’s Orbiting Lunar Platform-Gateway will be operational sometime between 2023 and 2025. Current plans call for a spacecraft that would circle the moon at distances ranging from 1,200 miles to 47,000 miles and house astronauts for up to six weeks at a stretch. The first manned rendezvous with the Red Planet is lightly penciled in for 2033.

A Question of Money

Researchers and aerospace engineers generally applaud the lunar initiative as a sensible way to prepare for the more arduous journey to Mars. “I’ve looked at the various overarching visions, and I think it is the right way to do it,” says Madhu Thangavelu, an expert in human space exploration and aeronautics engineering at the University of Southern California. Moreover, proponents point out, while many technological hurdles must be overcome to meet the plan’s tight timelines, none is a showstopper. Recent setbacks such as the failure of a Russian Soyuz rocket carrying new crew to the International Space Station notwithstanding, the biggest obstacle will likely be money—though NASA expects to bolster its limited coffers by sharing the burden with other countries and the burgeoning commercial space industry.

Work already is underway. Earlier this fall, NASA selected 10 university teams to design systems, concepts, and technologies to support deep space exploration, including the Gateway lunar orbiter. Among the winners of the X-Hab 2019 Academic Innovation Challenge are students from Iowa State University who will seek to improve current methods for removing excessive carbon dioxide from a closed atmosphere, and teams from South Dakota State University and the University of Connecticut investigating innovative 3-D printing of spacecraft parts. Students at the University of South Alabama specifically will focus on automation and power management of an unmanned biological lab for Gateway.

One reason Gateway seems off to a roaring start is that the project existed before the presidential directive caused NASA to scramble its jets. Originally, the orbiter was planned to shadow a small asteroid pushed into high orbit, but the Obama administration put it on the back burner to focus on Mars. Gateway’s initial justification, however, contains fine print arguing for its potential use as an orbiting lunar base, notes John Logsdon, the retired director of the Space Policy Institute at George Washington University. “The basic idea was having something in orbit that you could move around to different locations and use for different purposes,” he recalls.

A central argument for returning to the moon is that it provides NASA with a real-world test bed to work on the technologies needed for a Martian mission. If the ultimate goal is to explore the small set of accessible places in our solar system, including Mars, Logsdon argues, “you go to the nearest first.” The moon, he says, “gives us an ability to practice living off the planet when you are only three days away instead of eight months away.” Other researchers agree. “From a scientific and technological point of view, it’s a good idea to go back to the moon as a stepping stone to Mars,” says Iain D. Boyd, an aerospace engineering professor at the University of Michigan who worked on aerothermodynamics and space propulsion for four years at NASA’s Ames Research Center. “There are similar challenges, and it’s easier to first knock down those challenges in the easier environment.”

Not all experts are on board. G. Scott Hubbard, former director of the Ames center and an adjunct professor at Stanford University’s department of aeronautics and astronautics, thinks the space program should concentrate on Mars. “The moon is less interesting; it’s too simple,” he contends. Plus, it “hasn’t got the attractions Mars has.” The moon’s marginal resources, for example, include lunar dust, or regolith, and potentially frozen water. By contrast, Mars is extremely wet. While allowing there may be some legitimacy to first learning to live and work closer to home before plunging into deep space, Hubbard remains skeptical of the moon’s usefulness as a test bed, given the vastly different environments and resources needed to support habitation.
Proponents acknowledge that the moon isn’t a perfect practice run. The gravity is different from that of Mars, and there’s no atmosphere. Still, both missions would require “long-duration, highly reliable life support and sources of power,” perhaps generated by some sort of small nuclear device, Logsdon notes. “There is a kind of all-or-nothing thinking about all this. Can the moon be helpful? Yes. Will everything you need for Mars be able to be tested on the moon? No.”

Launch systems may pose similar challenges. During the Apollo program, lunar orbiters were blasted into deep space by the powerful, two-stage Saturn V rocket. NASA has been working on the next generation Saturn V, called the Space Launch System, or SLS, since 2004, but as Logsdon notes, it is difficult “to build something that large using modern fabrication techniques.” Like its precursor, SLS is a single-use rocket. Meanwhile, despite launch pad explosions and other setbacks, SpaceX—the privately held space technologies and exploration company founded by Elon Musk in 2002—is making impressive headway in developing a reusable Falcon rocket that eventually could replace SLS. As of October, SpaceX had successfully returned a Falcon 9’s first stage to Earth, landing it on both sea and inland platforms 30 times. “Full reusability is a big step toward affordability,” Hubbard says. Meanwhile, Blue Origin and Amazon founder Jeff Bezos and other entrepreneurs are investing heavily in reusable space-launch technology, while China has announced plans to develop a super-heavy-lift rocket with even greater capacity than SLS.

NASA also has revised plans for Orion, the manned spacecraft that SLS is supposed to launch on deep-space missions. The new plan is to first fly an unscrewed Orion capsule into orbit around the moon and then put humans on board for an orbital mission in 2023. Again, Logsdon underscores, anytime NASA designs and builds a human-rated spacecraft, there are engineering problems to overcome, “but with Orion, it’s pretty well understood what is needed.” The main issue, says Michigan’s Boyd, has been developing an effective heat shield to protect occupants from 5,000⁰ Fahrenheit temperatures during reentry into Earth’s atmosphere. That mission is now accomplished. This past summer, Lockheed Martin, a prime Orion contractor, installed a new shield on the module’s base that has a titanium truss covered in layers of carbon-fiber materials.

The Gateway space station itself remains “a general idea,” with “lots of work to do before it’s a specific design,” says Logsdon. NASA wants to use electric solar power propulsion to maneuver the module. Some robotic missions have used the technology, which electrically charges xenon gas to produce thrust. But it’s probably not the scale needed for an inhabited facility, Logsdon says. NASA also has indicated it would like to mine lunar ice for use as drinking water in the station and, when broken into hydrogen and oxygen, for fuel. “That’s all wishful thinking,” Logsdon says, noting that there’s “a whole chain of ifs” to be resolved. “We don’t know even for sure that the ice is there, we don’t know what form it’s in, and we don’t know the concentration.”

Perhaps the toughest task for engineers is designing a lunar lander that can be used over and over again, reliably and efficiently, says Boyd. So far, nothing’s even on the drawing board. Thangavelu’s team at USC has proposed that before sending humans to the moon’s surface, NASA should first build a small, fully robotic lander that would collect surface samples and carry them back to Gateway. “Once a lander puts down, we need to stay put in that region,” Thangavelu notes. So, having an orbiter allows the crew to dispatch landers to take samples from multiple sites and help determine the best locale for a permanent base. “The primary issue would be to find a spot rich in materials that could be used for construction,” he says. “It’s highly likely that regolith could be used as a building material. But the dust is also problematic; it gets into everything. It’s a terrible nuisance, even in robotic missions, and it messed up the Apollo suits very quickly.”

For now, NASA is focused on how to put humans back into lunar orbit and has spent very little money and time on what would come next: building a long-term lunar base to support a colony of humans. Hubbard notes that NASA has commissioned “thousands and thousands of studies that date back to 1952” on ways to construct a lunar habitat. But trying to translate those concepts into real, engineered hardware is “not the priority right now,” Thangavelu concedes.

Once Gateway is in orbit and occupied, of course, NASA will have years to build an outpost. And while experts don’t foresee any engineering issues that could delay Gateway’s timetable, they worry that funding woes could disrupt progress. During the 1960s moon race, NASA received around 4 percent of the national budget. The agency now gets around 0.5 percent, and its $20 billion annual budget—about one fourth of which is earmarked for Gateway—has been flat for years. To stretch its limited resources, NASA plans to bring in a coalition of countries to share the costs. So far, however, there have only been discussions but “no partners yet,” says Logsdon.

NASA seeks to partner with the commercial space industry as well. The past decade has seen massive amounts of spending and activity in the sector, Boyd explains, so “it makes a lot of sense for the government to piggyback on that effort.” Additionally, he says, having multiple partners means NASA will get “a diversity of inputs on the problems we’re trying to solve. The wider the range of inputs you have, the better.” And the sooner mankind can begin to call the moon a second home.

Thomas K. Grose, Prism’s chief correspondent, is based in the United Kingdom.
Design by Francis Igot