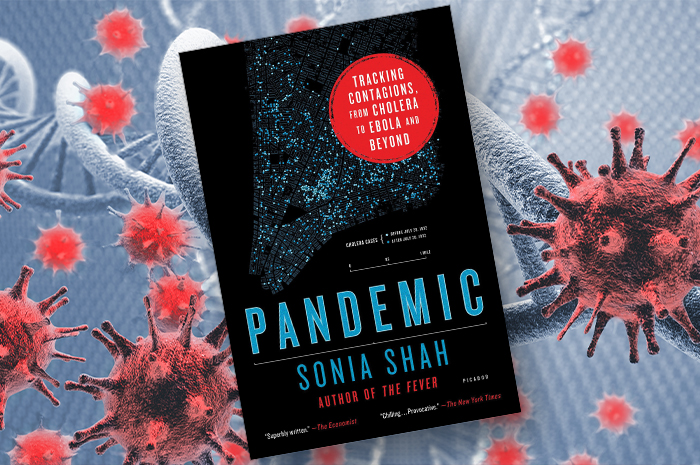 A science journalist explores why it remains so hard to quell outbreaks and the ever-evolving germs that cause them.

Pandemic: Tracking Contagions from Cholera to Ebola and Beyond
By Sonia Shah.
Farrar, Straus and Giroux, 2016. 271 pages.

The final chapter of this absorbing account of emerging diseases and their human impact is presciently titled “Tracking the Next Contagion.” Though published in 2016, it reads like an indictment of the world’s many missteps in response to COVID-19. To successfully defeat the next threat, warns science journalist Sonia Shah, we need to aggressively monitor suspected cases of transmission, be ready to act quickly to contain serious outbreaks, and move decisively to inform and protect the public. In the context of today’s global pandemic, her prophetic conclusion is both sobering and enlightening.

Equally sobering are the enormous complexities of pandemics and the pathogens that cause them, demonstrating just how difficult it is to stay ahead of the threats. As the author details, it has taken centuries for medical experts to understand microbes—and researchers continue to struggle with each unique, evolving form. Early chapters explore the leap of contagious diseases from animals to humans and the role of modern transportation, urban crowding, and inadequate sanitation in contributing to transmission—today and in the past. Chapter 6, “Blame,” reveals that scapegoating dates to antiquity, with foreigners or disadvantaged people typically bearing the brunt. Irish immigrants were labeled “exceedingly dirty” by the New York City Board of Health during the 1832 cholera epidemic, while Madrid’s 1834 outbreak prompted a backlash against monks and friars, who were “stabbed, drowned in wells, hanged, or hurled from rooftops.” More recently, for almost two decades, antagonism in the United States toward homosexuality and drug use blocked federal funding to battle HIV-AIDS, with both the Centers for Disease Control and Prevention and the U.S. Senate refusing to finance educational material deemed “overly explicit” and “promoting homosexuality.” After a National Cancer Institute physician called the virus “Haitian” in 1982, Haitian-Americans lost jobs, friends, and homes, while immigrant children were beaten in school. Government cover-ups, downplaying of risks, and denial are all historical constants, as are competing private and public interests, and the economic devastation wrought by contagions.

Some pathogens have provoked a curious response: indifference. Lyme disease has “steadily marched across the country since 1975,” costing the U.S. economy hundreds of millions of dollars annually. Yet the tick-borne scourge still evokes “a collective yawn,” even in New York state, where nearly one-third of cases occur. Mosquito-borne dengue fever, which surfaced in Florida in 2009, has been largely disregarded, though it is on its way to becoming endemic in the state, has emerged in Texas, and will likely spread further north, infecting millions. While Lyme and dengue are far less deadly than Ebola or cholera, their effects can be debilitating. And once pathogens cease to evoke fear, they secure a “golden ticket.” Complacency, writes the author, “is the first step in the cultural and biological process by which itinerant epidemics turn into deeply rooted endemic diseases.”

Shah establishes from the outset that her study is not a comprehensive historical overview. Instead, she aims for a big picture, analyzing, as stated in one chapter, “the logic of pandemics.”

Ultimately, humans need to recognize the unrelenting presence of pathogens, she argues. A constant in our lives, they can never be fully eradicated, only persistently defeated through sustained, vigilant engagement. Some, like Lyme, malaria, and rabies, can be subdued by antibiotics and vaccines, but many—including any number of coronaviruses—will continue to evolve into different virulent strains. “Recognizing the responsive dynamism of the microbial world and our own connection to it is a critical first step,” Shah observes. The best defense is knowledge, preparation, and response.

Beyond her thorough research and crisp writing, Shah’s journalistic approach contributes chilling immediacy to the narrative, from the passenger in Haiti whose cholera-infested bowels explode upon embarking on the plane Shah must board several hours later to an encounter with an agitated cobra being sold for dinner in a wet market of Guangzhou, China. She also relates her own agonized years with the pus-filled boils of MRSA, an antibiotic-resistant staph infection, for which her physicians can only suggest continuous dousing in bleach solution. Such vivid reminders of the human context in which contagions spread make Pandemic a useful guide to survival and recovery in the time of the novel coronavirus.