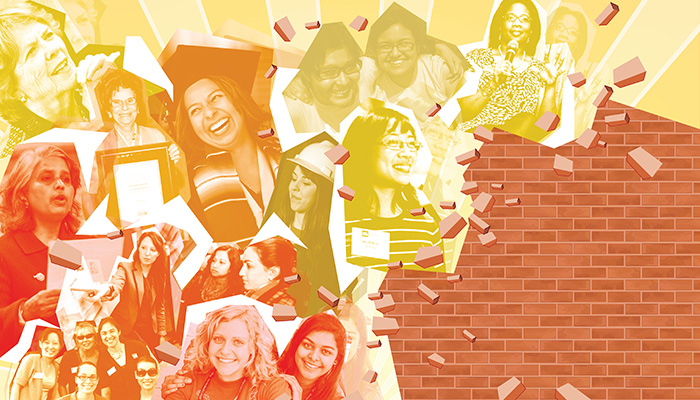 Several enterprising engineering schools have figured out how to lift the number of female graduates beyond a dismal, decades-old norm.

With a 4.0 GPA and several college-level courses under her belt, Maria Stroukoff had her pick of undergraduate engineering programs. The Oklahoma high school senior was accepted at seven of the eight schools to which she applied. Yet when decision time rolled around, just one stood out: George Washington University’s School of Engineering and Applied Science. “I could tell from the first day that I wouldn’t be a number,” recalls Stroukoff, who had shown up without an appointment and immediately was paired with an adviser for a personal tour of GW’s downtown Washington, D.C., campus and hours of fielding questions.

The warm welcome for Stroukoff was no coincidence. GW is among a dozen or so engineering schools that are graduating unprecedented numbers of women after overhauling everything from admissions to instruction. While the average share of females in engineering programs in the United States has hovered at under 20 percent for three decades, women make up 39 percent of GW’s engineering student body. At North Carolina State University (NCSU), women now make up a quarter of engineering students, up from 18 percent just five years ago. The University of Toronto has made similar gains, with women making up a record 30.6 percent of first-year engineering students. Southern Methodist University’s Lyle School of Engineering has seen the number of female students more than double in the past decade to currently represent nearly a third of the class. And Harvey Mudd College made history last spring by graduating an engineering class with more women – 56 percent – than men, a first for the school and the nation.

How did these schools buck the trend? To some extent, they offer similar outreach and support initiatives, such as summer camps and living learning communities, found at any engineering program seeking to raise the number of female graduates. But each also has cultivated a culture in which women thrive through a combination of commitment across all departments to increase the number of female students, a heavy dose of hands-on learning, and an environment in which women feel welcome. “People have been doing the same things for 50 years, and the percentage of women hasn’t changed,” says Laura Bottomley, the director of the Women in Engineering program at NCSU. “We realized that we were trying to change the women when we needed to change ourselves.”

All Hands on Deck

The turning point for NCSU came about a decade ago, five years into an initiative to increase female enrollment, retention, and success rates. “We did the same things that everyone else was doing, and then we stepped back and asked what impact we were having,” explains Bottomley. The numbers had barely budged, prompting a hard look at the status quo. “When women leave engineering,” she notes, “they say, ‘I discovered it wasn’t for me.’ But if you look closely, you see that women aren’t supported the way men are.”

Bottomley and her colleagues overhauled every aspect of the program, from the gender dynamics at recruiting events – she had noticed that men did all the talking while women were more likely to set up and break down – to incorporating everyday examples of theoretical concepts from Project ENGAGE into coursework. (Prism feature, March/April 2011). To make the plan work, however, she needed the entire academic staff to pitch in. “Historically, schools have had women-and-engineering programs, and the job of retaining women was theirs,” notes Bottomley. “In order to effect change, everyone had to accept responsibility for more women.”

Another common denominator of successful programs is an emphasis on experiential or project-based learning. As a junior in electrical engineering at GW, for example, Stroukoff took four classes during her last semester, “and every one of them had a lab, from programming to soldering hardware.” It was a stark contrast to the previous semester in South Korea, where her coursework was much more theoretical. “It made me appreciative of the environment I get to learn in,” she says.

SMU’s engineering dean, Marc Christensen, says the school has become much more hands-on since the start of its Gender Parity program in 2004, when it launched a concerted effort to attract more women with scholarships and other non-academic offerings. The program’s Innovation Gym, for instance, is a sort of “maker space” where students can work on real-world, time-sensitive projects and push boundaries without being graded. “Students have tackled real problems ranging from defect inspection in Frito Lay’s potato chip packaging process to rethinking the Slurpee experience for 7-11,” says Christensen. “When I speak with many of our female engineering students, it is clear to me that opportunities like these are meaningful to them and attract and retain them.”

Experiential learning has long been a part of Harvey Mudd’s engineering curriculum, but hands-on coursework now gets introduced earlier. First-year students, for example, flock to a lab elective called Autonomous Vehicles in which they build robotic cars using 3-D printing and electronics. In the sophomore-year course Experimental Engineering, students build rockets, launch them in the Mojave Desert, and then analyze and present data gathered during the flight. “Experiential learning is very attractive to young women because they can quickly see what they’re doing to have an impact in the world,” says Harvey Mudd President Maria Klawe, a computer scientist and former Princeton engineering dean. “They want to use what they learn to make a difference.”

Participating in research labs and hands-on courses “disproportionately benefits” young women by helping build their confidence, adds engineering department chair Liz Orwin. “They show up here and rub shoulders with everyone else who was at the top of their class, and not everyone can be at the top of class. So it’s a big blow to your confidence, especially in tough technical fields,” she says, noting “the confidence piece is a bigger deal” for women than for men. With project-based learning, “they think: ‘Hey, I’m good at that!’ It helps them get engaged.”

Stroukoff well remembers that feeling of being behind. Strong mentoring allowed her to persist. “It wasn’t in my nature at first, but now I’m always asking for help and always reaching out,” she says. “I’m constantly reminded that there’s someone rooting for me.”

Orwin also points to Harvey Mudd’s breadth of coursework – all students receive a general engineering degree – as a strong selling point for women. “A third of our coursework is in humanities and arts. [Students] want to dance and sing, and take history and government courses. That’s big attracter for women students in particular.”

Faculty at Michigan Technological University’s College of Engineering, where the proportion of women enrolled has climbed by more than 30 percent since 2009, credit their first-year Engineering Fundamentals with fostering an environment in which women feel grounded and connected. For the past ten years, students in the program have been scheduled in cohorts, so they learn with the same group for at least two classes, as well as work collaboratively on team projects. “Studies show that women seek more community attachment,” says the school’s first-year chair, Jon Sticklen, citing a 2009 Journal of Engineering Education paper, “Women Engineering Students and Self-Efficacy,” which notes that a sense of inclusion can help women succeed in engineering.

Ultimately, says SMU’s Christensen, having more women in engineering attracts more women. “If you look around the room and you see a third of people you identify with, then you don’t feel out of place,” he says. Harvey Mudd’s Orwin remembers feeling distinctly out of place as an undergrad there some 20 years ago, when she was one of nine women in her engineering class. “You felt like you were living in their [the men’s] community,” she recalls. “We were guests, not in the main population; the climate was not about what we were thinking and doing.”

Klawe attributes the engineering program’s culture shift in part to the prevalence of female professors, who number six out of a total of 20 faculty. “It makes a huge difference for female students to have role models, [to see] that it’s possible to have a career and combine it with having kids,” she explains. “That says women belong here.” Bhagirath Narahari, associate dean for undergraduate engineering programs at GW, where 19 of 86 tenure and tenure-track faculty are female, agrees there’s a “strong correlation” between an increase in women faculty and recruitment of more female students. The University of Toronto, where three of the four new engineering faculty hired for this academic year are women, offers a case in point. As ASEE’s research has shown (Prism Databyte, November 2014), having more female faculty doesn’t always correlate with higher graduation rates for women, particularly in disciplines that traditionally attract more females. Still, notes one recent graduate, having women engineering professors instilled confidence and made her “want to be like them.” Stroukoff hasn’t had any female professors this year and wishes there were more. “Having circuit theory taught by a woman would be really cool,” she says.

Even within this welcoming climate, women still gravitate toward disciplines such as bioengineering and environmental engineering while avoiding the more male-dominated areas of electrical or computer engineering. One exception is the Carnegie

Mellon University School of Computer Science, where women make up 40 percent of computer science majors, up from less than 10 percent in the mid-1990s. About 15 years ago, the school deemphasized programming experience in its admission

Despite the bright spots, engineering educators admit that gender parity remains a long way off. Female faculty members are still few and far between, though not for a lack of trying. “Frankly, really great female faculty can write their own ticket,” says Christensen. “I wish we could do more.” Moreover, Orwin notes, the percentage of women in the tech workforce has been falling since its peak in 1989. Still, she’s hopeful that the next generation, nurtured in a far more supportive environment than she was, will “force change” on campus and beyond.