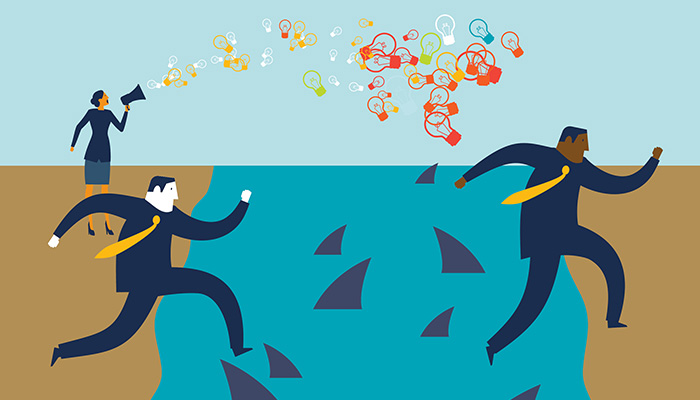 A graduate program trains engineering leaders by pushing them out of their comfort zones.

A few weeks into Northeastern University’s graduate-level Gordon Engineering Leadership (GEL) program, students are summoned to an early morning meeting, but not told why. Upon arriving, they’re transported from Boston to Camp Edwards on Cape Cod for a daylong military exercise. In an unfamiliar, uncomfortable setting, thrown into teams with classmates they don’t know well, students gauge one another’s strengths and weaknesses while confronting such obstacles as how to move people and a payload across water using boards, ropes, and poles. “Nobody dies. They just get a little wet,” says Simon Pitts, director of the program.

The Leadership Reaction Course offers an early taste of the personal and psychological skills training that distinguishes the Gordon curriculum from other engineering graduate programs. It’s an opportunity for students to see class lectures come alive and face the type of decisions that, in the working world, could spell success or failure. “In that environment, it crystallizes what we’re teaching,” says Pitts.

While traditional programs tend to focus on engineering principles and technical and scientific subjects, Northeastern’s combines classic instruction with real-world experience and close collaboration with industry. The goal is to create engineers who have a sound foundation of engineering knowledge but also know how to motivate people and lead teams into a complex, hypercompetitive global marketplace.

Saluted by the NAE

“We’ve developed a cadre of people that can climb mountains,” says Michael Silevitch, a professor of electrical and computer engineering at Northeastern who founded the GEL program and also directs Northeastern’s Center for Subsurface Sensing and Imaging Systems. GEL, the center, and the $500,000. National Academy of Engineering prize for educational innovation – won by Pitts and Silevitch in January – are all named for Bernard M. Gordon, the instrumentation pioneer known as the father of analog-to-digital conversion.

Pitts, who as a senior executive for Ford Motor Co. hired engineers all over the world, says a gap exists between what companies need from engineers to deliver products to market and what their education prepares them to do. The Gordon program works to fill that void. In so doing, Pitts says, it helps boost the performance of existing firms and start new ones, generating jobs.

Begun in 2007 with 10 students and now preparing for a class of 50, the program is built around 14 “essential qualities for successful engineering leaders” as shown by research and experience: initiative; negotiating and compromise; ability to connect across disciplines, skills, and cultures; communicating and advocacy; interpersonal skills; vision and “realizing the vision”; decision-making; responsibility and urgency to deliver; resourcefulness; ethical actions and integrity; and courage.

The majority of students, called fellows, come to Northeastern with three to five years of work experience, and many continue to work full time as they complete their degree. The leadership part is one year, and students without a graduate degree complete additional coursework to earn a master’s in a particular engineering discipline. Those who come with a graduate degree earn a certificate after one year.

An Edge Over MBAs

GEL combines five elements: leadership capabilities, leadership labs, product development, scientific foundations, and an industry-sponsored Challenge Project. The fellows take two graduate-level classes: Leadership, and Sientific Principles of Engineering. The latter course, which can serve as a refresher in the various engineering disciplines, is important because engineer-leaders need to understand all types of engineering in order to lead teams outside their field, Pitts says. That way, they will know the right questions to ask when something isn’t working. At companies that manufacture complex devices, such scientific grounding gives GEL graduates an edge over graduates of master’s of business administration programs, the two professors say.

“These days, there’s nothing that’s just a mechanical system or just an electronic system,” Pitts says. “Everything is so well integrated. You have to deal with hardware, software, firmware, with manufacturing people, with purchasing people. So you have to have leaders that can lead technically outside of their discipline.”

All of a fellow’s work builds toward the final test — the Challenge Project. Done in lieu of a thesis, it is a real-world project that a company needs and wants. Fellows take an engineering product from start to finish, navigating bumps, setbacks, and challenges along the way. In the process, they assess their own capabilities and learn how to motivate others, even if they are not in a position of authority. When they give their final presentation, students describe both their product and the process they went through to develop it.

The individual Challenge Project cannot be “make work” that serves merely as a practice for students and is abandoned on graduation. Each needs to make a significant contribution to a company, increasing revenue, improving production, or developing something new. “If they [the companies] don’t take it and don’t use it, we failed,” Silevitch says.

Mentoring is a key part of the process. During the Challenge Project, the fellow will work with three mentors: one from the leadership program, one faculty mentor in the fellow’s engineering specialty, and one from industry to guide the student in understanding the company’s needs and the current marketplace. Reaching to tackle a complex project does more than advance a fellow’s skills, Silevitch says: “If they are confident they can tackle this mountain, they are not afraid to tackle the next mountain and the next mountain.”

Character is important, too. In addition to market and customer focus and learning how to influence people, the GEL program emphasizes ethics and courage. That includes taking responsibility to prevent failure (including the kind that can hurt customers or ruin companies) and leading a life of purpose.

Fellow Michael Rogus, an engineer who specializes in ceramics and works for defense company L-3 Communications making space telescopes, came to the program expecting to gain the kind of leadership skills it would ordinarily take years of working in industry to acquire. What he hadn’t expected was his own personal transformation.

The faculty were always pushing the fellows out of their comfort zones, says Rogus, who completed the Gordon program in 2013 and is finishing his master’s degree in mechanical engineering. From the military exercise, which he describes as “awesome,” to assignments to get out into the community, he was pressed to do things he otherwise wouldn’t have tried. Sent to a tech group meeting, he ended up taking leadership positions with the New England Section of the American Ceramic Society. Group discussions about the importance of finding a mentor led him to become involved in Big Brothers Big Sisters.

“I am absolutely a different, more confident, well-rounded individual because of the Gordon Program,” Rogus says. If the record of GEL’s 145 graduates is any guide, his self-assurance has a sound basis. “Typically we see 50 percent of the cohort promoted within the first year after they participate in the program, rising to 75 percent after two years,” Pitts says. One graduate is CEO of his own firm

Kathryn Masterson is a freelance writer based in Chicago.