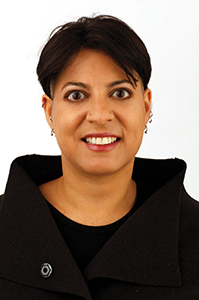 Our World Only Seems All-Digital

We should help students understand that high-tech tools intersect with physical reality.

When I was 13, I signed up for ninth-grade shop class—half a semester each of auto and electrical shop. I was surrounded by boys in the shop but, as a girl who planned to go to engineering school, I was already pretty used to finding my own path. It wasn’t until decades later when a friend commented on her high school’s sharp divide between the students who were “academic” and ”vocational” that I consciously realized that I wasn’t just the only girl in my class—I was the only student in the shop who was also in a program for the academically gifted.

This marked division between young people being prepared to work with their hands and those educated to work with their brains is well known in the United States and other countries. In his 2006 essay “Shop Class as Soulcraft,” Matthew B. Crawford faulted this schism, laying out arguments for manual labor. Making something that works as intended, he writes, is “an experience of agency and competence.” He argues that all manual work has a cognitive component: Practitioners make decisions on the fly that integrate their skills and their intentions with what their tools and materials can provide.

Even with all the emphasis now on “making” and “hands-on” learning, we can ask: Why should engineering students, who may never do any fabrication in their professional career, learn how to make things by hand? Crawford provided one answer. Our first-year engineering design course offers another: Since students are learning a design process to make physical objects, they need to test their designs against (and learn from) physical reality, and that means making models and prototypes.

For engineering undergraduates today, the seemingly ephemeral, effortless, weightless digital world can be a default in a way it never was for those of us who came of age before the World Wide Web. This is neatly captured in architect Bryan Boyer’s short, witty essay “Matter Battle!” (matterbattle.com), in which he describes what it takes to bring ideas from the world of the physical to an audience more familiar with the digital world. Matter Battles, he writes, “constantly remind us that no matter how high tech your implements, there is always room for basic failure…. 3-D printers get their nozzles gunked up. Laser cutters burn their lenses….High-tech tools generally have low-tech components somewhere in their workflow.”

Simultaneously, with the rise of the Internet of Things, the digital world is no longer safely contained behind a screen. Instead, it is starting to intersect with the physical world in unprecedented ways. Designing these systems requires a healthy respect for the intransigence of matter and all the complexities of its interactions. John Krafcik, the CEO of Waymo, recently admitted that self-driving cars will never be truly “Level 5 autonomous”; that is, able to drive under all weather and driving conditions. As someone who commutes daily in famously complicated Boston traffic—often after digging my car out from under snow—this wasn’t exactly surprising.

But no matter what our graduates end up doing, I want them to have a healthy respect for other people’s work, following the adage that “no labor is unskilled labor.” This holds true equally for traditionally feminine labor like sewing, knitting and embroidery, and cooking, to say nothing of childcare or housecleaning, and also male-coded work like farm labor, construction, and maintenance. Asking our students to work in the physical world offers them an early lesson in appreciating the abilities of the people who might build or repair what they design.

Finally, engineering, at whatever scale, is about mass and energy. The “cloud” is a metaphor that conceals hydroelectric generating systems’ worth of electricity and massive amounts of material, transportation, and invisible labor. The most useful definition of technology that I know of comes from science fiction writer Ursula K. Le Guin: “Technology is the active human interface with the material world.” Learning to make things helps our students remember that in an increasingly digital world, engineers still need to keep their feet firmly planted in the material world.

Debbie Chachra is a professor of engineering at Olin College.