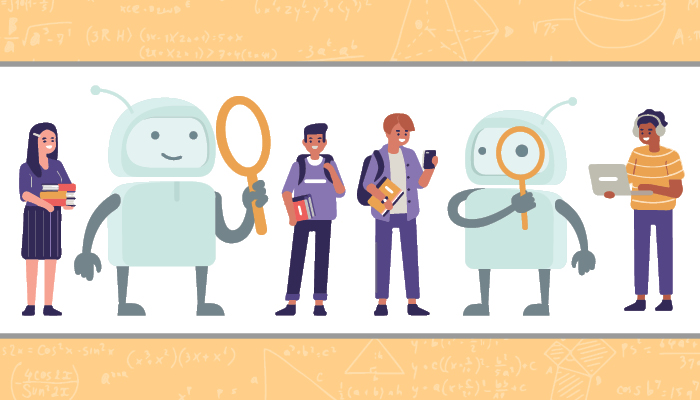 A curriculum redesign breaks calculus’s stranglehold on engineering education, engaging students who may be underprepared in math with artificial intelligence and robotics.

When Chad Jenkins, a professor of electrical engineering and computer science at the University of Michigan, was an undergraduate, he double majored in math and computer science. The math degree was necessary, his adviser told him, to prepare for graduate school. Jenkins benefited from mentorship then and throughout his career. But the professor, the first Black recipient of a computer science Ph.D. from the University of Southern California, worries that other racial and ethnic minority students may lack the support that aided his success. He studied calculus, linear algebra, discrete math, graph theory, and abstract algebra, persevering through setbacks with help from his mentors. But other students may not be so fortunate, he says, as they face the barrage of calculus courses at the beginning of a typical engineering degree.

Statistics underscore this concern. For example, Black students earned just 4.3 percent of engineering bachelor’s degrees in 2019, according to ASEE’s Engineering and Engineering Technology by the Numbers. That represents a drop from the 2000 figure of 5.6 percent. Math under-preparation may be one critical factor in the low numbers. As a 2019 report from Stanford University’s Educational Opportunity Project noted, many high-poverty public schools with large concentrations of Black and Hispanic students don’t offer Advanced Placement (AP) courses; math education often stops at algebra. By contrast, students from well-resourced high schools can get some of the required calculus out of the way, jumping more quickly into the engineering curriculum.

The load of required calculus courses can be crushing, says Jessy Grizzle, professor of electrical, computer, and mechanical engineering at the University of Michigan—especially when students don’t see the classes’ relationship to engineering. He and Jenkins, respectively director and associate director of the Michigan Robotics Institute, decided to change the order of operations. Instead of front-loading the first- and second-year curriculum with multiple semesters of calculus, they are developing a robotics engineering degree that launches freshmen with computational linear algebra in a projects-based course. The goals: increase student access, engagement, and success along with overall equity.

Richard Tapia has observed the disparity between students from well- and poorly resourced schools over his five decades teaching at Rice University. The mathematics professor also serves as director of the university’s Tapia Center for Excellence and Equity in Education. “Poor preparation at all levels is the worst enemy of underrepresented minorities,” says the Mexican American professor, who was the first member of his family to attend college. Equally worrying, adds Tapia, is that elite universities may see poor preparation as lack of talent. Even valedictorians from poorly resourced schools don’t realize what they’re up against until they arrive on campus, he emphasizes.

The University of Michigan curriculum is one part of the solution to this complex problem. Linear algebra follows naturally from high school algebra, its only prerequisite. Students don’t need to finish the calculus progression before studying what’s normally a third-year subject. And by reversing the traditional order of mathematics, Jenkins and Grizzle help put students from different zip codes on a more even playing field.

The Michigan robotics program operates by the principle that talent is widely distributed but opportunity is not, Grizzle explains. Not everyone has the chance to develop their talent the way engineering is currently taught—“so we’re trying to break up the hegemony of calculus and get linear algebra out front, and we can have lots of people feel that ‘I’m ready for this.’”

Originally conceived by Jenkins, Robotics 101: Computational Linear Algebra could one day fulfill the linear algebra requirement for other engineering degrees as well. The class, piloted in fall 2020, is the Robotics Institute’s first foray into undergraduate studies after seven years of offering M.S. and Ph.D. programs. Robotics 103: Robotic Mechanisms will be offered in winter 2021. Other advanced courses, such as Robotics 102: Graph Search for Robotics and AI, are being planned in preparation for faculty approval of the new robotics engineering degree.

The University of Michigan is not the first institution to offer linear algebra earlier in the engineering curriculum—but the university’s approach, which creates a more inclusive culture for pursuing robotics, could help loosen the clogged pipeline to the discipline. As Grizzle puts it, “in the modern data-centric information age, in fields like robotics and artificial intelligence, linear algebra is the lingua franca.”

Jenkins notes that linear algebra is the basic means of representing three-dimensional space: “where things fit; how objects relate to other objects; how we can close the bodies, the links, the structures of a robot into an articulated structure that you can then use to figure out where should the gripper on the robot be to pick something up. How do we make sure that we don’t bump into things or hurt somebody?”

As the Robotics 101 online description explains, “Instead of seeing the ‘rules of calculus’ as your introduction to college mathematics, you will experience the ‘raison d’être of mathematics in engineering’—in other words, why we employ it so heavily in engineering in the first place. In short, you will have a palpable understanding that computation and mathematics are your friends instead of hoops to be jumped through on the way to a degree.”

As a course booklet written by Grizzle describes, the first project leads students through building a map for robots to navigate from LiDAR data collected on the University of Michigan campus. The second incorporates regression and “will give students insight into the power of machine learning.” The third focuses on controlling a Segway using a version of model predictive control. 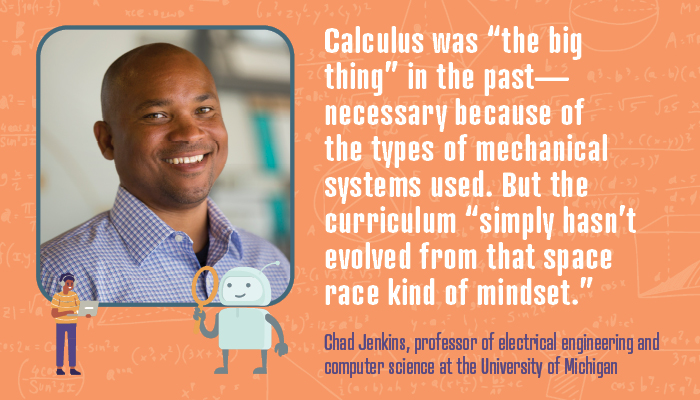 Seat In the Executive Suite

Maria Fields is one of the freshmen benefiting from the University of Michigan’s innovative approach. Her private Grosse Pointe Woods, Mich., high school didn’t offer any AP classes, but the African American student joined a FIRST Robotics team. That experience both helped her discover a love for STEM and led to a jarring realization about the lack of racial minority representation in science, technology, engineering, and math. Fields jumped at the opportunity to learn linear algebra, she says, especially since algebra was one of her favorite subjects in high school. “When I heard about this class and its inclusionary approach, it really struck a chord with me,” she explains. “I appreciated the robotics department making conscious decisions to create a diverse and inclusive department and encouraging students who are a part of underrepresented groups in STEM to take Robotics 101.”

As Jenkins points out, diversity in the classroom is essential for creating advanced technologies without bias in a world where machine learning algorithms are making hiring, financial, and even incarceration decisions. “We know we’re not training the right people to do the right things ethically and across backgrounds right now,” he says. “To have more diversity [among the developers] and in the executive suite, you need to have diversity in the classroom.”

An Equitable and Inclusive Ecosystem

Jenkins and Grizzle recognize that curriculum redesign is only one component of supporting underrepresented groups. “It’s not necessarily linear algebra [alone] that’s going to nurture these students,” says Jenkins, who coauthored a call to action to the computing community to address structural and systemic inequities. Michigan Robotics is “trying to envision … how we can do education for engineering differently.”

“Our motto is that we want to play up robotics with respect,” he continues. Rather than prior preparation determining a student’s outcome, the program designers want students who have never experienced computing, artificial intelligence, or robotics to be able to say, “Wow, this is interesting. I want to learn about it.” And then, Jenkins says, “we are able to provide the structures that allow them to do just that.”

For example, the equity focus extends to course materials. Since not all students have access to powerful computers or the programming environment MATLAB, the faculty turned to Julia, a browser-based language accessible in the cloud. As the Robotics 101 booklet notes, “If you can google at home or the library, then you can complete our programming assignments.”

Michigan Robotics also actively seeks out faculty who can provide students with role models. Its diverse executive committee runs faculty searches and provides a “broad set of opinions on candidates,” according to Grizzle. In addition, institute meetings have replaced faculty ones, with students selecting two or three peers to attend. “They are careful to send a diverse group,” Grizzle adds.

Michigan Engineering also offers a dual-degree program with Clark Atlanta University and Spelman and Morehouse colleges, the historically Black liberal arts institutions in Atlanta that are part of the Atlanta University Center (AUC) Consortium. As part of the program, students can complement their liberal arts undergraduate degree with an engineering degree from the University of Michigan. Prospective students for this dual-degree program have enrolled in Robotics 101 and will be offered other robotics courses. “Many [minority-serving institutions] do not offer engineering as a degree option,” Grizzle notes. “We firmly believe that having AUC students engage with us, before making a huge commitment to doing a dual degree with Michigan Engineering, will lay the foundation for an enhanced dual-degree program.”

Michigan Robotics also works with Wolverine Pathways, an outreach program that helps high school students in underserved areas such as Detroit prepare for college. And the Michigan STEM Academies Scholars Program (M-STEM), a collaboration between the College of Engineering and the College of Literature, Science, and the Arts, serves as a holistic support system for “students with high ability and potential in science that also possess traits, such as socioeconomic status, first-generation college status, race, and gender, that suggest they are uniquely suited to collaborate across differences.” M-STEM’s flagship six-week summer program helps incoming students transition to college. 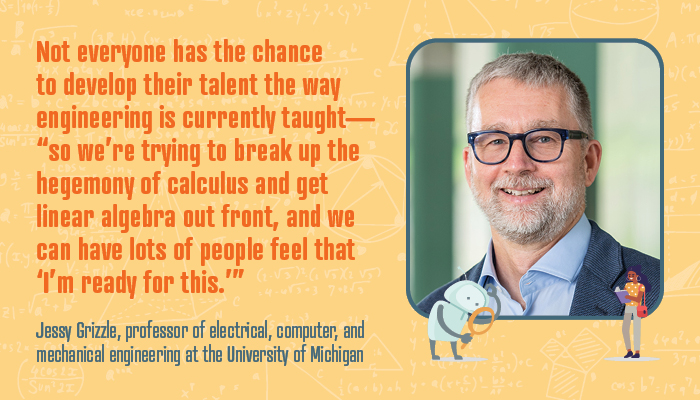 The Michigan robotics program was created to both evolve curriculum and prepare students for the future. Beginning with linear algebra tied to programming “gives you the idea that math is something you can turn into code that you can then use,” Grizzle says.

The course booklet emphasizes the need to “break the Sputnik-era four-semester calculus chain where AP credits are a huge predictor of success.” Calculus was “the big thing” in the past, Jenkins says—necessary because of the types of mechanical systems used. But the curriculum “simply hasn’t evolved from that space race kind of mindset.”

Currently, starting with linear algebra “just makes a lot of sense,” the associate director says. It’s also a more equitable way to make engineering accessible to a more diverse cross-section of students. “We’re here at the right moment and the right time and the right place to do this,” Jenkins stresses.

The approach might already be working. “Taking this class has definitely sparked my interest in robotics,” Fields says. “I could see myself pursing robotics as a career.”