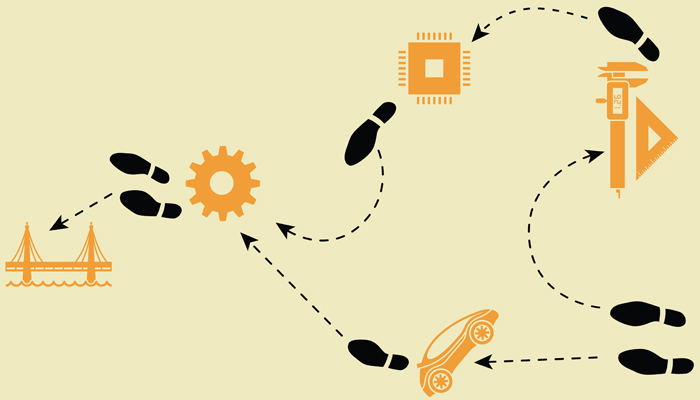 Techniques for mastering MOOCs – from ‘lecturelets’ to stage presence.

What would prompt a tenured faculty member to stare into the camera’s unblinking lens and teach a course that requires prodigious amounts of preparation, yet conveys no credit or extra pay?

For John Owens, an associate professor of electrical and computer engineering at the University of California, Davis, it was the “phenomenal” opportunity to reach thousands of students and help shape the future of education rather than have to comply with some top-down directive later. Altruism, specifically a “corny” desire to expand access to learning and “maybe excite high school students” about engineering, spurred Georgia Tech mechanical engineer Wayne Whiteman’s studio debut. Whatever the reason, the rapid rise of massive open online courses – Coursera alone claims 5 million students worldwide – means there may be a MOOC in your future.

MOOCs are “a very different experience than teaching in a classroom,” cautions Owens, who became the first MOOC maker on campus with the launch of Introduction to Parallel Programming on Udacity in February. In a real classroom, instructors can see if students look puzzled and come up with different examples or explanations on the fly. Not so with a one-way MOOC broadcast. Also, “you can’t just take your lecture notes for class and read them on camera,” advises Whiteman, whose five-week Introduction to Engineering Mechanics debuted on Coursera last spring.

The rewards – from institutional, departmental, or personal prestige to improved pedagogy and learning outcomes – seem worth the effort, however. These tips from the MOOC masters should help engineering educators step online in style.

Think of MOOCs as educational TV for channel surfers: Attention and attendance wane quickly. “Signing up is really a low bar,” notes Georgia Tech’s Whiteman, whose first online offering attracted 17,000 registrants, with 2,000 sticking through all five quizzes and 1,500 earning a statement of accomplishment. While that’s still “more students than I’ve touched in my statics courses in my entire 30-year career,” he says, falloff is significant. Moreover, MOOCs attract a wide spectrum of ages and experiences. Whiteman’s, for example, enrolled students as young as 10 along with 4.5 percent who were academics or had Ph.D.’s.

To captivate such a diverse audience, “it’s good to have bite-sized content,” advises Whiteman, who has distilled basic mechanics into short modules and “edu-bytes” of no more than 10 minutes. Armando Fox, professor in residence in electrical engineering and computer science at the University of California, Berkeley, reorganized his 90-minute lecture into 8-to-12-minute video segments or “lecturelets” for his software engineering MOOC, each covering a topic with one or two self-check questions. Evidence from the field suggests shorter is sweeter. New data from edX, a nonprofit MOOC provider created by MIT and Harvard, for instance, put the optimal length for lecturelets at 6 to 9 minutes. Median viewing time, where half the students watch the entire clip, peaks at 6 minutes, then falls rapidly. The edX data also reveal that mixing talking heads with computer screenshots or slides is more engaging than screenshots with voice- overs.

MOOCs require “a huge amount of work,” says UC Davis’ Owens, who devotes two full days preparing each 60- to 90-minute lecture. To maximize his instruction time, he writes eight pages covering not only exactly what he will say, including jokes, but what he will draw. It takes eight hours to record the lecture, stopping, starting, and rewriting as necessary. The editing crew needs 32 hours to synchronize the audio, screencasts, and video into a complete lecture. Online education veteran Autar Kaw, a mechanical engineering professor at the University of South Florida, estimates that it takes five to 10 hours to produce each hourlong lecture video beyond the time needed to develop textbooks, simulations, and real-world problems.

“It can be overwhelming,” agrees Georgia Tech’s Whiteman. “Focus on clear, precise delivery of basic concepts,” he recommends, but “don’t dumb down the material.” His course isn’t “statics for dummies.”

“Do not do it all by yourself,” says Kaw. “That is a simple recipe to give up making a MOOC.” Get all the technical help you can, and let others produce the videos and type the textbook. Even without glitzy graphics, online courses require high-quality sound studios, video editors, and programmers. Lighting must be adjusted and microphone wires hidden. “This would be impossible to do on my own to this level of quality,” says Whiteman, who goes through dry runs before taping several modules at a stretch in the campus studio. To simulate the classroom experience, he reviews the script with the tech crew, noting where the lug wrench, cherry-picker truck, or other physical example will sit on his desk and when he will refer to them. He also meets twice a week with a graduate teaching assistant to review all materials before uploading them at the beginning of each week. Still, he admits, “it’s really weird at first to talk to the camera and no students are around.”

While few MOOC stars undergo media training or use TV makeup – “It would not have done any good anyway!” jokes Autar Kaw – most develop stage techniques that improve engagement and streamline production. Kaw practices “like crazy.” He makes sure to wear dark solids and ties that are light orange, green, or blue. “Avoid stripes and very shiny clothes at all costs,” he warns. John Owens tapes a sticky note that exhorts “Energy” above the camera to keep him as animated on screen as he is in class. “You really have to crank it up,” he says, noting that his online students mostly see his hand sketching “crummy” drawings while he talks. “As far as the students in the class know, I could be a robot above the elbow,” he joked on his blog.

Mix it Up With Students

Although they lack the give-and-take of live classrooms, MOOCs can engage students. Whiteman, for example, includes as many visual examples as possible to explain concepts, from brandishing a lug wrench to displaying a 3-D model of the x, y, and z axis along with the mathematics of calculating force equilibrium. He pauses every few minutes to have students reflect on a question, starting in Module 1 by asking them to jot down the difference between engineers and scientists. (His answer, drawn from aeronautical engineer Theodore von Kármán: The scientist describes what is, the engineer creates what never was.)

Autar Kaw recommends presenting materials in different forms and letting students express themselves in multiple ways. “I know students are engaged when they ask me questions via YouTube and email.” Owens promotes interactivity by joining his students’ “lively” online discussions, posting hundreds of comments. An experienced MOOC instructor advised him to wait an hour before jumping in when a student posts a question. Chances are another student will have provided the answer, freeing Owens to respond to the hardest, most interesting questions.

Amy Schmitz Weiss, an associate professor of journalism at San Diego State University who co-taught a MOOC on data-driven reporting, urges instructors to state up front how quickly they will respond to inquiries; send a welcome message at the beginning and end of each week; and provide multiple ways to participate, including using social media; and consider holding virtual live chats. Above all, she says, review forum postings, and participate in the discussions.

Occasionally, “vocal jerks” hiding behind fake email addresses can wax rude and crude in the discussion threads. “Don’t let their behavior get you down,” stresses Armando Fox, “and don’t let it sour the experience for the vast majority of students.”

Fox, who has co-taught software engineering courses on Coursera and edX, notes that the “cross-cultural, cross-time-zone reach of MOOCs obliterates” the normal rhythms of sleep, exams, and holidays, making it hard for professors to check forums and post frequently. Moreover, MOOCs don’t have formal office hours. To keep abreast of traffic and help students enrolled in his first MOOC offering, Fox had undergraduates who had done well in the on-campus course monitor online forums. Subsequently, he recruited “World TAs” from the highest-scoring MOOC students and deputized an undergraduate to serve as head TA and organize them using a Google Group mailing list. Result: Nearly 24/7 global coverage by multilingual students, “and we get to have a life,” reports Fox.

Though “not fond” of multiple-choice tests, Whiteman finds “they work well in the MOOC environment.” Besides, he adds, “there’s no way I could grade 4,000 exams!” Beyond generating “tons of data,” online quizzes are graded automatically, providing rapid feedback to students and instructors. An uproar ensued, for instance, after students discovered a wrong answer in Whiteman’s first quiz. He quickly regraded and gave credit, but “it was high adventure for a few hours.” Some MOOCs have a peer-grading option, but the system seems impractical when capabilities range from elementary to graduate students.

Cheating remains a concern, since instructors have no way to know if the person taking a quiz is copying answers or is even the genuine registrant. However, MOOC providers are developing signature-tracking certification and other methods to verify identity. Online proctoring services also are springing up. In addition, the barriers to hands-on labs are falling with the incorporation of smartphones and other technology.

So far, many MOOC pioneers find their investment yields dividends for their on-campus students. “It’s another resource,” says Whiteman, who has had undergraduates taking a Georgia Tech statics course and using his MOOC at the same time. Autograding frees up TAs to spend more quality time for Fox’s on-campus students, while breaking classroom lectures into short lecturelets has made them “livelier and better-attended.” Fox reports that ratings for both his teaching and the on-campus course went up when MOOC technology was integrated.

After more than a decade of online teaching, USF’s Kaw still prefers the “social experience” of the traditional classroom but says it’s like choosing between going to the movies and watching Netflix: “I like both.” MOOCs clearly are shaking up the status quo, promising to transform engineering teaching and learning. Says Georgia Tech’s Whiteman: “Like it or not, the train is moving, so you might as well get on it and be part of where it’s going.”