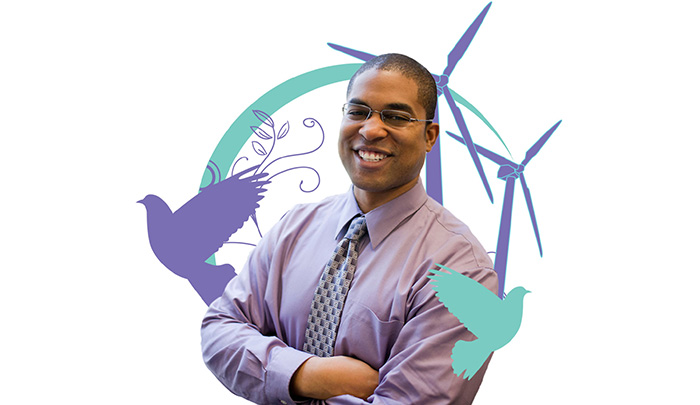 A cutting-edge researcher and devout Christian puts belief at the center of both.

In his day job, Cullen Buie fits the profile of a driven, high-powered assistant professor of engineering – of whom the Massachusetts Institute of Technology has more than a few. His Laboratory for Energy and Microsystems Innovation (LEMI) specializes in turning scientific discoveries into workable processes and devices by solving problems that have stumped previous researchers. A prime example is its prototype hydrogen-bromine flow battery. While others knew that the reaction between hydrogen and bromine could generate a powerful electrical current, Buie’s team figured out how to get around the need for a costly membrane and still prevent a power-wasting spontaneous reaction. Result: a relatively low-cost and compact means of storing and releasing energy generated by intermittent solar panels and wind turbines. ”There’s a huge potential market for devices like this,” Buie says.

Similarly, it was no secret that energy could potentially be extracted from wastewater. But LEMI is finding a way to do it, developing tiny microbial fuel cells that use bacteria to turn organic materials, sugars, and acetate into electricity. Installed in a wastewater treatment plant, Buie says, these fuel cells could generate enough power to run the plant itself. Other LEMI experiments explore how to extract more DNA and thus expand the range of bacteria useful for genetic engineering.

It’s in his off-hours that Buie is atypical. A devout Christian since an undergraduate at Ohio State, he lectures at campuses around the country through the Veritas Forum, a group founded by Christian students at Harvard to engage students and faculty in discussions about religion, life, and philosophy. “Unfortunately, faith, religion, and belief have become something that people are told to keep private and not share,” he says. Charismatic on stage and accepting of doubters, he laces his remarks with self-deprecating humor and occasional lapses into the highly technical (“Let me geek out for, like, 30 seconds”).

For Buie, the common theme linking religion and cutting-edge research is faith, which he defines as belief based on incomplete information: “I would argue that the very best research scientists are those who exercise a lot of faith every day.” It took faith, he says, for him to persevere and ultimately prevail in designing an electro-osmotic pump for a fuel cell when he was a Ph.D. candidate in mechanical engineering at Stanford. Two postdocs had tried the same thing and failed; one said it couldn’t be done. Buie tried anyway. “Along the way there were several times when I wanted to quit, but something kept me going,” he says in a videotaped lecture. “That ‘thing’ – I would argue – was faith that ultimately I would make my experiment work. . . . This is the kind of faith you find at the frontier of any scientific endeavor.” While he doesn’t proselytize in class, faith influences how he treats students, he says, and recently caused him to open up a class discussion following the death of a student.

Buie is quick to credit mentors who gave him faith in himself. The list includes Gregory Washington, now dean of engineering at the University of California, Irvine, who offered Buie, then an undergraduate, a head start in research at his Ohio State lab, and Minnie McGee of the Ohio State University Minority Engineering Program. Buie is a mentor in turn. Active in the National Society of Black Engineers while a student – “I want people to notice I’m gone if I leave” – he offered tips on “proposal writing that yields results” at this year’s NSBE convention and serves on the steering committee of the Academic Research and Leadership Network. He and his wife, Donielle, are associate housemasters at an MIT dorm, where they live as they raise two boys. Interaction with people, Buie contends, “is the only thing you do that’s eternal.”