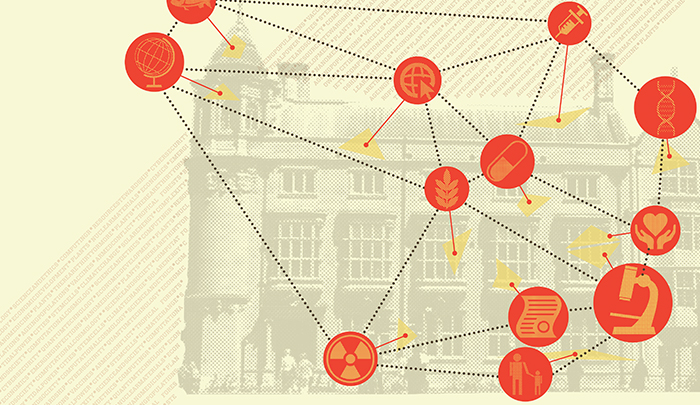 Are young people less likely to buy cars than “mobility” – access to multiple types of vehicles depending on whether they’re commuting, vacationing, or on a date? How will that dovetail with society’s need to conserve energy and protect the environment? And what will the dawn of autonomous vehicles mean for insurance and regulation? Such questions fascinate Oxford University electrical engineer Malcolm McCulloch, but they can’t be answered by engineers alone. So about a decade ago, he teamed up with a geographer, an economist, and a behavioral scientist. The four researchers struggled to attract funding until 2005, when they found what McCulloch calls “the perfect opportunity” at the Oxford Martin School.

A radically new type of research institute within the 900-year-old university, Oxford Martin is devoted to big-picture, boundary-bending science. McCulloch and David Banister, a professor in Oxford’s School of Geography and the Environment, became co-directors of the school’s Institute for Carbon and Energy Reduction in Transport (ICART). Their team has since gone on to work with the Oxfordshire County Council on an integrated transport system and with several car manufacturers to see how current electric and hybrid vehicles can accommodate new battery designs.

Multidisciplinary research “is our unique selling point,” enthuses Ian Goldin, Oxford Martin’s director. “What we do, others don’t do.” Headquartered in a 19th-century, neo-Gothic building in Oxford’s city center, the school currently supports more than 30 potentially game-changing research programs — ranging from cybersecurity to tidal power to geoengineering — and 300-plus scholars.

To get funded by the school, Oxford academics must show that their research meets four criteria: excellence, scale, impact, and added value. Excellence is what most scholarly research seeks to achieve. But added value? “We ask, ‘Could this be done elsewhere?’” Goldin explains. If it could, it probably doesn’t belong at Oxford Martin. As for scale and impact, the school is interested only in research that will make a “tangible difference” in efforts to solve the most vexing problems facing humankind or to develop new technologies that would allow the planet to evolve into a cleaner, safer, and more viable place to live. Accordingly, it targets four main areas: energy and the environment, technology and society, health and medicine, and ethics and governance. There are, of course, other private institutions that offer alternatives to government and corporate grants – the Institute for Advanced Study in Princeton, N.J., and the Howard Hughes Medical Institute, for example – but unlike Oxford Martin, they do not typically fund research that cuts across a range of disciplines.

The school is named for James Martin, an Oxford-trained physicist, computer scientist, futurist, and prolific author who made a fortune leading an information-technology consulting firm. Martin, who died last year at 79, initially endowed the school with $100 million. Four years later, he offered an additional $50 million if the school could match it from other sources. It did.

Technology and Political Will

Martin’s 1978 book, The Wired Society, correctly forecast how ingrained computing and the Internet would become in society. A subsequent book and film, both titled The Meaning of the 21st Century, are something of a touchstone for the school. In them, Martin laid out what he felt were the greatest technological, political, ethical, economic, social, and environmental challenges facing the human race. He believed that humanity was at a crossroads, Goldin says, because it had, or could soon have, the technologies and know-how to overcome those tough problems, if there were the political will to use them. “He felt this could be our best or worst century.”

Martin was also a devotee of cross-disciplinary research, believing the biggest problems facing the world don’t fit neatly into one category. One of those “mega-problems,” as he referred to them, is global warming, the object of Oxford Martin’s Geoengineering Program. There, co-director Richard Darton, a chemical engineering professor, working with a wide range of experts, including earth and climate scientists, ethicists, and lawyers, assesses which geoengineering options are the most feasible and least risky. Darton himself is not a fan of altering the Earth’s climate systems, but he says it ultimately may be necessary.

While interdisciplinary research has become a popular buzz term in academia, the reality is that the academy is still strongly monodisciplinarian. Funding agencies typically use review panels comprising experts from one field to rate proposals, and they tend to approve only those that clearly fall within that discipline. Proposals that straddle two or more areas are often orphaned.

That was Dieter Jaksch’s experience. The physics professor is co-director of the school’s Program on Bio-Inspired Quantum Technologies. Most research into constructing astonishingly fast and powerful quantum computers attempts to build them up from individual ions, atoms, or photons. Jaksch’s group is trying to better understand the mechanics of biosystems that show amazing and unexpected quantum properties – such as photosynthesis – in the hopes that decoding their secrets will provide a blueprint for quantum devices. The group’s researchers also include materials scientists and biologists. That was a mix other funding agencies found too chancy. “Oxford Martin was the one that allowed us to take this forward,” Jaksch recalls.

A similar story is told by Alain Goriely, a professor of mathematical modeling, who co-directs with Henry Snaith, a physicist, the Program on Solar Energy: Organic Photovoltaics. The two used mathematical modeling and physical experiments to find a nontoxic, organic material to build low-cost solar cells. They’ve successfully mixed a metal oxide often found in toothpaste, perovskite, with a thin dye that can be printed on glass. The resulting cells already have an efficiency of 15 percent — very high for a first-generation cell. “It is the most exciting project I’ve been involved with in mathematics,” Goriely says. Funding agencies, however, were not impressed. Mathematics panels tend to look for proposals that will introduce new math, and are less interested in solving new problems with old math. “I think in doing that, I am doing my job,” Goriely says, “but the panels do not always see it that way.”

Because Oxford Martin’s competitive selection process has to accommodate many disciplines simultaneously, it has one large external review panel that includes a wide variety of experts. But a lot of the work is done by smaller subpanels comprising just a few members. For a proposal to be accepted, it must hit all four criteria, “and they are equally weighted,” Goldin says. The school typically has funding rounds every three years. The last one, in 2012, approved 10 percent of 350 proposals received; the previous round picked 15 out of 160. The school has been spending around £2.5 million ($4.1 million) a year on funding, but is increasing that to £14 million ($22.8 million) a year in 2015. Only Oxford University researchers are eligible for funding. Still, with its growth over the past eight years and its interdisciplinary approach, “it now has a reach across the whole of the university,” says Bill Roscoe, who co-directs Oxford Martin’s Institute for the Future of Computing, where he has been researching how to secure Internet-connected healthcare devices.

Once a program’s three years of funding ends, it can reapply for another round. A few programs have been around since the school’s beginning. Most, however, are not re-funded — but often because they’ve succeeded and gained new outside financing. “It is absolutely not a sign of failure [to not get re-funded]. I think of it as graduation. In some ways we play an incubator role,” Goldin explains. McCulloch’s ICART, for example, was funded until 2013, but the team continues with new sources of funding, as does Oxford’s Environmental Change Institute, which began life at Oxford Martin.

As a neophyte school striving to become a distinct “brand,” Oxford Martin hosts workshops, seminars, and conferences, and its scholars continually hit the lecture circuit. Goldin takes a few each year to the World Economic Forum in Davos, Switzerland. One who went this year was Lionel Tarassenko, an electrical engineering professor who gave a talk on advances in self-monitoring healthcare technology. Last fall, a report from the school’s Program on the Impacts of Future Technology gained worldwide headlines with its claim that within 20 years nearly half of all U.S. jobs could be at risk from computerization. When many news stories referred merely to an “Oxford study,” Goldin was chagrined. “You can’t change the world if you don’t get your message out,” he says. Ultimately, though, the school may come to be judged by the third criterion it requires of proposals: impact. Goldin admits that the payoff for much of its research could be years away. He expects, though, that Goriely and Snaith’s breakthrough “will change the nature of photovoltaics.” That would position Britain’s oldest university well ahead of the curve.