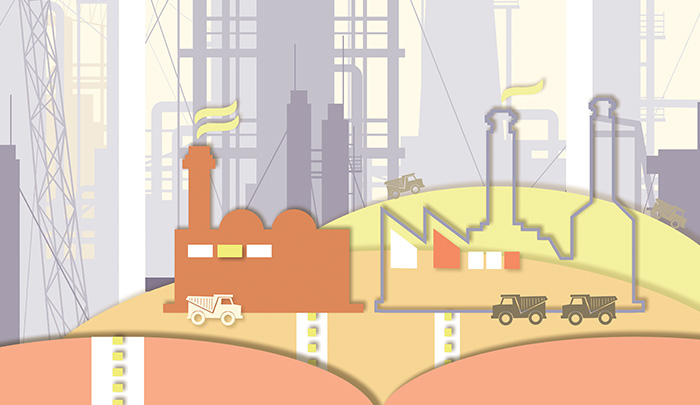 France’s future-generation reactor would recycle most of its spent fuel. Could the process revive the U.S. nuclear industry?

To medieval Norsemen, the name Astrid meant something divine, beloved, and beautiful. Among latter-day nuclear researchers in France, it stands for something more prosaic but nonetheless hopeful: a carbon-free, environmentally friendly response to the world’s growing energy appetite. ASTRID, or Advanced Sodium Technological Reactor for Industrial Demonstration, could produce electricity at a faster pace, with greater safety and little proliferation risk, they say – all while recycling waste and shrinking drastically the quantity of radioactive material that must be stored indefinitely or pushed deep underground.

If the United States resumes nuclear development in a big way, a technology similar to ASTRID might be the chosen path. The concepts behind it, employing a fast-neutron reactor and continuous recycling of spent fuel, were found to be “the most promising options” in a just-completed three-year Department of Energy evaluation of nuclear fuel-cycle approaches. What’s more, “there were no detrimental effects” when it came to proliferation risk, nuclear material security, or safety, according to a preliminary report on the study last April.

Since the dawn of civilian nuclear power in the 1950s, safety, proliferation fears, and the problem of what to do with radioactive waste have bedeviled the industry and fueled public distrust. The 2011 Fukushima nuclear disaster – following earlier shocks at Three Mile Island and Chernobyl – raised safety concerns anew and drew attention particularly to radioactive waste stored aboveground in cooling pools. But in the United States, policymakers have been unable to reach consensus on a permanent disposal site. While deep geologic disposal is generally seen as safer in the long run than storage on the surface, it is still fraught with uncertainty, raising what some experts say is a question of intergenerational equity. That’s one reason nuclear waste has been called the Achilles’ heel of the nuclear power industry.

With ASTRID’s help, that could change.

Among the least jittery Western countries when it comes to nuclear energy, France currently draws three-fourths of its electricity from some 58 reactors. The socialist government of François Hollande plans to reduce reliance on nuclear power, but his goal of a 50 percent cap won’t be reached until 2025, and experts say it’s unrealistic. Polls suggest that is fine with a significant share of French people; in a survey last June, only 14 percent of respondents opposed nuclear energy. For now, France is an undisputed nuclear-energy giant with a global reach. An estimated two-thirds of the world’s 440 nuclear reactors rely in one way or another on French technology and expertise. Far from receding as a primary energy source, nuclear power generation worldwide is expected to grow by nearly 50 percent by 2035, according to the U.S. Energy Information Administration. Areva, the French energy conglomerate, values its order backlog at nearly 46 billion euros, thanks largely to expanding markets in Asia.

France also has been a leading champion of the “closed fuel cycle,” converting spent plutonium and uranium into fresh reactor fuel. For years, it used a technique called PUREX, which extracted plutonium from the used fuel. More recently, France modified the PUREX process to convert spent fuel into a mixture of uranium and plutonium oxides, known as MOX.

For Areva, MOX is big business. By special train and then by police-convoyed truck, 110-ton casks containing spent fuel from the Netherlands and elsewhere are hauled to Areva’s La Hague plant, on a peninsula jutting into the English Channel from Normandy. There, the fuel is mixed, ground, compressed, heated, inserted into fuel rods, and assembled into a metal structure for delivery to a nuclear plant, where it will refuel a reactor. Besides the Netherlands, buyers of MOX include energy providers in Germany, Belgium, Switzerland, and Japan. Japan is pushing ahead with nuclear power despite the trauma of Fukushima.

But MOX has its drawbacks. Environmentalists scorn La Hague as nothing less than a huge nuclear-waste dump. According to Arjun Makhijani, the president of the Maryland-based Institute for Energy and Environmental Research, applying the word “recycling” to MOX is a “travesty.” It creates more waste volume, he argues, and “has resulted in pollution of the ocean all the way to the Arctic.” Stockpiles of recovered plutonium exceeded 80 tons by 2012, according to the French government. In a 2008 report, Greenpeace condemned the use of MOX for its high toxicity. Critics say the transportation of spent nuclear fuel from Areva’s MOX clients exposes densely populated cities and towns to potential danger.

Caroline Drevon, an Areva senior vice president, says MOX is the best available solution to the problem of used-fuel management, particularly given the reluctance of governments around the world to agree to deep-storage facilities. “The question is, do you use available technology to start solving the problems now, or do you wait for technology to come that could be more advanced?” she asks. “The vision we have is that existing technology should be utilized now in a responsible approach that will also pave the way for the integration of advanced technology.”

That kind of integration is what is intended with ASTRID. French nuclear research and development is mainly focused on two points, says Joël Guidez, a senior official of both the French Atomic Energy and Alternative Energies Commission (CEA) and the French Nuclear Energy Society: to develop a proliferation-

resistant reprocessing method and to test the possibility of separating out minor actinides, the metallic chemical elements present in nuclear fuel. It aims to reuse 96 percent of the burned fuel and “reduce drastically the final waste,” Guidez tells Prism in an email. The final waste would lose its radio-toxicity after about 300 years, a vast improvement over current waste-disposal schemes.

Fast neutron reactors, such as ASTRID, offer what French researchers see as the quickest route to improved recycling.

A sodium-cooled, so-called Generation IV design, ASTRID has been a high-priority R&D project since 2009 and was developed with help from Japan and the Idaho and Argonne National Laboratories in the United States. Plans call for a decision around 2017 to proceed with a prototype. It could start operating in the early 2020s, with commercial operation a couple of decades later. During a transition phase, both the current MOX system and ASTRID can coexist, according to a presentation by Christophe Béhar, director of CEA’s nuclear energy division.

Researchers calculate that ASTRID will consume the plutonium in used MOX fuel and make efficient use of the half million tons of depleted uranium that France will have accumulated by 2050. “Unlike reactors currently in operation or under construction worldwide, that use only about 1 percent of natural uranium, fast neutron reactors are able to use more than 80 percent of the uranium resource,” CEA claimed in a presentation published by the International Atomic Energy Agency. Compared with present reactors, it offers “vastly more efficient use of uranium resources,” says the World Nuclear Association, plus “the ability to burn actinides which are otherwise the long-lived component of high-level nuclear wastes.”

Too big, slow, and expensive?

In the United States, reprocessing of spent nuclear fuel has drawn opposition over fears that some of the fuel could be diverted to terrorists or rogue states seeking to develop nuclear weapons. It also never caught on commercially. In recent years, attitudes have shifted, though not completely. Enthusiasm peaked during the George W. Bush administration, which in 2006 launched the Global Nuclear Energy Partnership. Eventual commercial reprocessing was a major component. The Obama administration halted domestic aspects of its participation in 2009 after deciding not to pursue fast reactors or recycling facilities. For the time being, discoveries of abundant natural gas reserves have eased pressure to revamp America’s civilian nuclear program.

Meanwhile, a Department of Energy-appointed blue-ribbon commission offered little encouragement for reprocessing as an answer to the nuclear waste disposal dilemma, which arose anew when the administration killed a deep geologic repository at Yucca Mountain in Nevada. The commission declared that “no currently available or reasonably foreseeable reactor and fuel cycle technology developments — including advances in reprocessing and recycling technologies — have the potential to fundamentally alter the waste management challenge this nation confronts over at least the next several decades, if not longer.” But with the Republican-controlled House of Representatives and the Obama administration at a standoff over where to locate a permanent disposal site, the question of what to do with nuclear waste remains unsettled. Behnam Taebi, a Delft University of Technology and Harvard Belfer Center scholar trained in both engineering and philosophy, argues that “the great accompanying uncertainty” surrounding deep underground disposal imposes a burden on generations far into the future that can’t easily be justified morally.

DOE’s research dollars continue to support a variety of approaches to improving the nuclear fuel cycle. And the newly completed study, led by the Idaho National Laboratory, is likely to be an impetus to further R&D on fast neutron reactors and continuous recycling. That’s good news for researchers like Michael Simpson, a national laboratories veteran who is now an associate professor of metallurgical engineering at the University of Utah. His specialty is pyroprocessing, which he describes as “a multistep chemical process that can be used to separate actinides from the other constituents of nuclear fuel, concentrate fission products into waste forms, and recycle the actinides into useful nuclear fuel rods.”

Although the INL study didn’t recommend any particular technology, ASTRID serves as an example of a promising approach to the fuel cycle, says Roald Wigeland, who headed the 11-person INL team. The study estimates that billions of dollars in R&D will be needed for the U.S. nuclear industry to adopt a new fuel cycle, and full deployment would cost several hundred billion dollars more. But such an investment may be required anyway if nuclear power is to remain part of the U.S. energy mix. Wigeland notes that some current U.S. reactors are due to reach the end of their life in the next 15 years. Whether a new fuel cycle is adopted or not, the current fleet will likely need to be replaced between 2030 and 2050 unless extensions are obtained. And while uranium is now plentiful, supply is finite, and recycling is likely to become more attractive as it diminishes.

Whether the huge investment in a new fuel cycle would be worth it is an open question. “In 10 years the landscape for global energy will be dramatically changed,” says Mycle Schneider, an independent energy consultant whose clients have included the French government. “Compared with renewables and gas, nuclear energy is too big, too slow, and too expensive.” To which fans of ASTRID would retort: Au contraire.

By Stephen Glain and Mark Matthews

Stephen Glain is a freelance journalist based in Paris. Mark Matthews is editor of Prism.