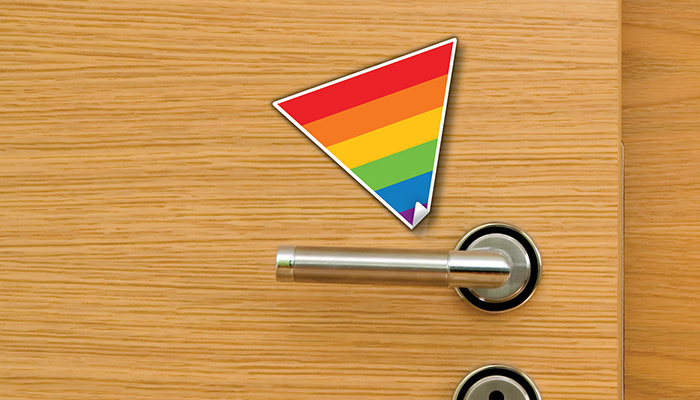 Ways to create a welcoming atmosphere in engineering for LGBTQ students

Close to completing his Ph.D., Peter Eliot Weiss found himself at the University of Minnesota Morris for a job interview. The political climate at the small, rural campus seemed a world away from the progressive environment of the University of Toronto, where he’d been studying. As an openly gay man, he initially felt a sense of alienation while touring the school, and wondered if he’d be able to work there should he be offered a job. But then he spotted an inverted triangle rainbow sticker — a symbol of lesbian, gay, bisexual, transgender, queer (LGBTQ) pride — on a faculty member’s office door. “A sense of relief washed over me,” he says. “I felt I could fit in there.”

While Weiss ended up accepting a job offer at his alma mater, where he is now a lecturer in the Engineering Communication Program, he never forgot that experience. Today, he chairs U of T’s Positive Space Committee in Engineering, a joint student, faculty, and staff initiative that seeks to create awareness of LGBTQ issues. Positive Space was founded by a group of U of T political science students, who devised the rainbow sticker in 1995. Last summer, Weiss and his colleagues Susan McCahan, vice dean of the Faculty of Applied Science and Engineering, and Jason Bazylak, a senior lecturer in Mechanical and Industrial Engineering, presented one of two programs on LGBTQ inclusion at the ASEE conference. Together with a series of workshops on Safe Zone Ally Training spearheaded by the ASEE Diversity Committee, the initiatives were a first for the conference and relatively new to the engineering education community.

Like Weiss, LGBTQ students tend to be more wary of college campuses than the general student body. A 2010 survey of more than 5,100 students and faculty nationwide found that one third of them considered leaving school because of what they perceived as a negative campus climate; 29 percent experienced harassment; and 20 percent feared for their safety on campus. Meanwhile, only 7 percent of universities offer support programs geared toward LGBTQ students.

Engineering, in particular, can be intimidating to LGBTQ students. “There’s a presumption of straight maleness in engineering that we’re still getting people to work around,” says Tim Wilson, professor of electrical and computer engineering at Embry-Riddle Aeronautical University, Daytona Beach Campus, who came out as gay in graduate school. Though there was an LGBTQ group on campus at MIT, where he was an undergrad, he was reluctant to get involved: “I thought if I identified that way, it would impact me negatively.”

Rowan University chemical engineering professor and ASEE Diversity Committee member Stephanie Farrell says professional and personal matters tend to be separated in the culture of engineering. “Studies suggest that this phenomenon is more prevalent in engineering than it is in the humanities and arts. So a lot of these issues don’t get talked about.” For example, a gay man who has a partner may not have a chance to bring it up with his colleagues, she says. “It creates a bit more of a chilly environment.”

Awareness is the key to changing that culture, Weiss says. “If there are five of you and 1,000 others, you’re going to feel intimidated. The 1,000 others must make you feel welcome. They do that by awareness.” Students may come to school with biases they’ve learned in their home communities, often unwittingly. “When you’re not even aware that a group exists and you’re not aware that languages and behaviors can be prejudicial to that group, you can do things unconsciously that cause great discomfort for others,” he explains. For instance, once most people realize that using the word “gay” as an insult is denigrating, they stop. “When we go to a different community, we have to learn to lose those biases. We can safely assume that engineering undergrads have a great deal of goodwill, and as soon as they are aware, they make every attempt to do that.”

The Engineering Positive Space campaign, which has now spread to a handful of other Canadian universities, is informal by design. Campus initiatives like sensitivity training for orientation leaders originate with the student-run committee, supported by Weiss and other faculty. Weiss says engineering students in particular are well suited to the challenge since they’re naturally motivated by problem-solving. Four years ago, for example, the committee created a poster depicting an out-gay mechanical engineering undergrad holding his hard hat covered in a rainbow flag and feather boa. The tagline reads: “My hard hat isn’t gay but I might be. Think before you speak.” Distributed around campus, the posters got students talking. In a conversation overheard by Weiss, one student patiently explained to another why using the word “gay” inappropriately is insensitive.

U of T engineering student Justin Tobia, who is active on the committee, says the tenor on campus has improved in the time he’s been there. “Each year we have to ramp up the level of discussion and the subject of the workshop, because the student leaders are becoming more and more knowledgeable of and engaged with the LGBTQ community within engineering. In my experience too, LGBTQ-identified students are feeling more comfortable opening up to their classmates now compared to three years ago.”

Safe Zone is a more formalized program already established on many campuses throughout the United States, though not necessarily in engineering. Its mission is to educate faculty and students on LGBTQ issues by familiarizing them with appropriate terminology, making them more aware of discrimination, and offering skills to disrupt it. Workshop facilitators start by introducing basic definitions, for instance explaining that some people may be born with a sex with which they don’t identify. “If you were born as a male but you identify as a women, it creates complications,” Farrell explains. To put those students at ease, Safe Zone suggests that faculty members include a statement on their syllabi asking students if they prefer a particular pronoun. “There might be a student with the name of John who prefers to be referred to as ‘she.’” says Farrell. “A lot of people don’t know to bring that up.”

Another way to make LGBTQ students more comfortable is to hold a discussion about conduct on the first day of class and stress the importance of nondiscrimination. Safe Zone training suggests instructors establish a word, like “ouch,” to call out a violation. “If the students know what that means, they’ll get the message. You always want to remain positive and not embarrass people.”

While the workshops on campuses typically run a half day, the ASEE Diversity Committee offered a condensed version in 12 time slots at the conference to include as many participants as possible. The sessions were facilitated by volunteers, some of whom had attended Safe Zone training. About 150 people attended, and though the committee didn’t track the outcome, feedback was positive, according to Farrell. Comments ranged from “Thank you for starting this conversation” to “What took so long?”

Meanwhile, Positive Space attendees broke into groups to discuss ways in which they could make their spaces more welcoming and livable for LGBTQ students. “People worry that we should be proactive, but creating these opportunities for discussion and to allow awareness to arise quite naturally has been very effective in making life a lot better for these students,” says Weiss. “We thought we wouldn’t have a big turnout, but we had more people than we thought.”

Farrell says the Diversity Committee would like to keep the momentum going by creating on “online ally” community featuring interactive webinars, possibly in partnership with the National Organization of Gay and Lesbian Scientists and Technical Professionals (NOGLSTP), a co-sponsor of the workshops, along with engineering schools at the University of Southern California, Rowan University, Texas A&M, and Michigan Tech. At this year’s conference, the committee plans to offer eight sessions, including a more interactive Level 2 workshop.

Margaret Loftus, a frequent Prism contributor, is a freelance writer based in Charleston, S.C.
Design by Michelle Bersabal.