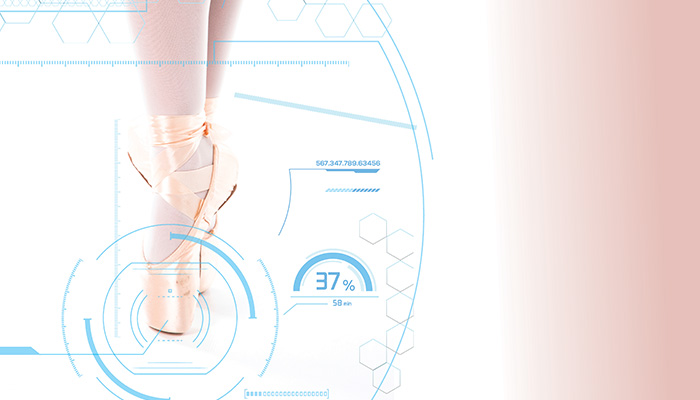 Engineering and art collaborations flourish, but which group is leading?

Anyone who hears a ballerina describe the pain of dancing en pointe, or watches as she rips, sews, and re-glues the lining of her satin slippers to soften the assault, can see why the Dance Theater of Harlem found an ideal match at the City College of New York’s engineering school. Students and dancers will collaborate to minimize injuries and enhance performance. Is there a better design for their shoes? Is there an exercise device that would help with strengthening? “Students are thrilled about having this type of application for a design,” says engineering dean Gilda Barbarino. There’s room as well for jointly developed instruction, she says: “We as engineers understand the biomechanics of the body, but the dancers, they’re the ones using the movements. There’s a lot they understand intuitively.”

Such partnerships are sprouting around the country. From the University of Delaware, where engineering, art, and theater students collaborate on such senior design prototypes as a device for cardiopulmonary training, to the University of Utah’s program in Entertainment Arts and Engineering and Arizona State’s School of Arts, Media + Engineering, the idea of incorporating an A for arts into STEM (science, technology, engineering, and math) is gaining traction. CCNY’s fusion of engineering and dance has a precedent at Princeton, where Naomi Leonard, a professor of mechanical and aerospace engineering, teamed up several years ago with dance professor Susan Marshall to incorporate the complex motion patterns of schools of fish and flocks of birds into choreography.

“I’ve always argued that engineering is an art form,” says William Best, an electrical and computer engineering professor at Lehigh University. “We use science and mathematics, but we’re artists. The space shuttle was designed by artists.” Best co-directs Lehigh’s integrated degree in engineering, arts, and sciences, known as IDEAS. “It’s kind of a 50/50 mix between Arts and Sciences and Engineering and it’s jointly run by both colleges,” he says. The IDEAS degree culminates in a senior project. Currently, one senior is working on making medical devices like cancer delivery ports and prosthetics less sterile looking so people will be more comfortable using them. Another student in mechanical engineering and art and design wants to design costumes for science fiction movies. He’s making a Godzilla using microprocessors for his project.

“By integrating the arts into the engineering program, it gets students away from the rigid nature of solving equations,” Best says. And because students are well versed in more than one area, employers tend to seek out IDEAS graduates, he adds. One student recently got an internship at Disney because he had both the technical sophistication of civil and structural engineering and the aesthetic vision of art and product design. “It has exceeded our wildest expectations,” says Best. Last year, 850 students applied; 65 were accepted for an incoming class of 30. Four classes have graduated.

The Rhode Island School of Design (RISD) appears to have been the first to adopt the acronym STEAM. Believing that true innovation comes from combining disciplines, students and educators there hoped to make art and design a part of the national STEM education agenda. Shortly after RISD STEAM was initiated, nearby Brown University followed suit. That was in 2012. Now other schools, such as MIT, Yale, and Cornell, also have STEAM programs.

“We focus on being a resource for current students to collaborate with each other to bridge the gap between arts and sciences,” says Brown STEAM President Veronica Wu, who is herself walking the walk with a major in both materials engineering and visual arts. “It seems to me like the trend right now in engineering is towards hands-on labs, incorporating design principles into engineering.” Brown STEAM holds workshops and large events, such as the weekend-long Assistive Tech Makeathon co-sponsored by the SpeakYourMind Foundation in April 2014, in which students from Brown and RISD developed assistive technologies for people with disabilities. The design winner was Reach, a low-cost, intuitively controlled robotic hand.

Last year, RISD and Brown formed one of 20 collegiate teams in the 2014 Solar Decathlon Europe contest. As with the U.S. decathlon, sponsored by the Department of Energy, the challenge was to design and build an affordable and aesthetically pleasing net-zero solar-powered house from scratch. The team raised more than $750,000 in corporate support and designed the 800-square-foot Techstyle Haus, which lost to Italy’s Roma Tre University but drew a share of the 20,000 visitors to the decathlon site at Versailles, outside Paris. Brown STEAM is also working with some RISD graduates who design inflatable structures through their company, Pneuhaus. The plan is to make a STEAM pavilion. “We’ll have workshops there, meetings, potentially exhibits,” says Wu. “I can’t stress enough that having an art school so close to a STEM-based school has been really critical to our success.”

Heirs to a Long Tradition

If the STEAM label is relatively new, it builds on a heritage stretching back at least to Leonardo Da Vinci. The National Science Foundation drew on that tradition two decades ago, sponsoring a Leadership in Science and Humanities program with the Department of Education and National Endowment for the Humanities. Among the projects funded was an experimental interdisciplinary course at the University of Virginia. Writing in the Journal of Engineering Education, the course’s designers noted that while “standard university curricula tend to compartmentalize engineering, humanities, and social sciences,” real-world engineering decisions “defy such compartmentalization.”

In 2001, when an alumnus donated a sizable art collection depicting working scenes to the Milwaukee School of Engineering, it became a catalyst for courses and programs synthesizing art and engineering. These range from ergonomics to a graduate civil engineering course in which students researched bridges featured in a photo exhibit.

“I am frankly a big believer in the STEAM movement,” the late Charles Vest, then president of the National Academy of Engineering, told a congressional hearing in 2013, arguing that visual and performing arts are “very much a part, in my opinion, of what has to happen at both K–12 and in undergraduate and even graduate education in our universities.”

Engineering and music have long operated in harmony, whether filling 17th-century cathedrals with the peals of pipe organs or replicating symphony hall acoustics within tiny 21st-century ear buds. At Union College in Schenectady, New York., engineering students can incorporate sound into their technical studies, and musicians can better understand their instruments. “I love working at the intersection of electrical engineering and music,” says Palma Catravas, who runs Phasor Lab, a reasearch laboratory in Union’s Peter Irving Wold Center that enables experiments at this interface. “It’s what I do. It’s my passion.”

“We have the means to characterize musical instruments using the tools of electrical engineering,” Catravas says. “It gives musicians a way to learn about their musical instrument that’s different from the typical approach. We offer a suite of techniques and tools not normally part of their traditional studies.” Working with vocalists, engineering students recorded a madrigal and then applied signal-processing techniques to include reverberation so it would sound like the choral groups were singing in the college’s Memorial Chapel. “We also recorded them singing in the actual venue,” Catravas said. “Then we played them our processed version and asked them to guess which was the actual recording.” In one class, she recalls, ECE students processed a short excerpt of a Palestrina composition so many times that they threatened to get up and perform it during the concert. “The projects that involve music as an input provide us with a way to teach fundamental engineering concepts,” said Catravas. “At the same time, it has the potential to instill an appreciation for the fine arts.”

Colin Turley, a physics major who minored in both electrical engineering and music at Union, used Lissajous figures to analyze and visualize musical intervals. “I developed a method for visualizing the intervals that make up various systems of musical temperament,” Turley said. “A lesser mission was to explore different forms of musical temperament.” His motivation was curiosity. He wanted to understand why the harmonic series and modern tuning did not agree exactly. “From there, I got into the topic of tuning and temperament. Mostly, I learned a lot about the history of musical temperament and how it affects the character and color of a work,” he said. “It also taught me about the limitations of modern tuning.”

The educators behind Lehigh’s IDEAS contend that a melding of arts and sciences is the future of engineering. If so, engineering schools should be assuming a stronger leadership role in the STEAM movement, argues CCNY’s Barbarino. “One of my concerns is that the art community seems to be the big driver, and what are we as engineers doing?” she asks. Her question is en pointe.

Alice Daniel is a freelance writer and instructor in journalism at California State University, Fresno.
Design by Michelle Bersabal