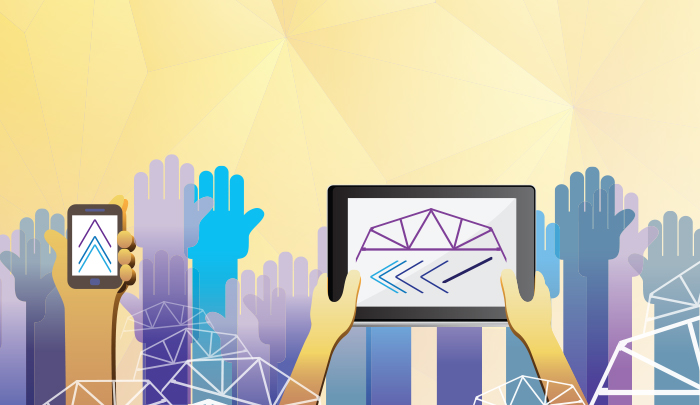 There were no computer stores in his small Argentina hometown, so Julian Rimoli learned to program his own games. By high school, he’d parlayed a growing knowledge of physics into coding small, Angry Birds-style simulations. “I always had that in me,” says Rimoli, an assistant professor of aerospace engineering at the Georgia Institute of Technology. Thus it was only natural that, standing at the whiteboard teaching statics last year, he began wondering how to better convey loads and stress using computer simulations, because “things move around a lot.” Truss Me! – the iPad application that Rimoli developed in his spare time – incorporates the most advanced structural-design techniques and, like Angry Birds, is based on the principles of physics. But unlike most bridge-building games, which typically give players incorrect feedback and different responses for the same construction scenario, Rimoli’s was designed “to make sure the simulations were a true reflection of reality,” including buckling and other structural failure. Initially he used the app to demonstrate and solve problems during class but then decided to make it a game that students could download and play anywhere. “When we are teaching, we focus a lot on the methods of solving problems,” explains Rimoli. “There’s nothing wrong with that: Engineers should know the methods, but sometimes we’re not doing enough to empower the creative side of our students.”

There seems to be an app for almost everything these days, from tracking expenses to learning chess. Yet despite the market’s exponential growth – the technology-research firm Gartner predicts that mobile-app downloads could top 179 billion globally this year – and a proliferation of app-design classes and student clubs, engineering educators only recently have begun to tap these new tools. Examples so far include engineering faculty at Sheffield University in England, who now install a free app to record attendance and use polling in some instruction and assessment, as the school’s revised policy now requires. Engineers at the University of California, San Diego, are field-testing an iPad app they recently developed that helps students learn to visualize two- and three-dimensional objects, a key skill for success in engineering.

Educators say 3-D computational models like Truss Me! let students test hypothetical scenarios that otherwise would be impossible in the traditional classroom . “As someone who has analytical tools at the tip of his fingertips but lacks the physical hardware to test my design intuition, this app is like a virtual mechanical playground,” enthuses Kevin Okseniuk, a Georgia Tech aerospace engineering major in Rimoli’s statics course. “I love it!” For Georgia Tech aerospace engineering graduate student Matteo Carrara, imagination is the only limit. “Being able to try out concepts you are learning directly on your tablet or phone is a really useful complement” to more traditional methods of teaching, he says.

Rimoli’s app fans extend well beyond his statics students. ETH Zurich, a top Swiss engineering school, is using Truss Me! in a design competition involving 800 students. As of late March, the app ranked no. 22 among paid iPhone education apps.

Such innovations remain a rarity in engineering schools, however. “There’s just a lack of nice simulations that are delivered on tablets or even on Web pages,” says Kurt Gramoll, a professor of engineering and director of the University of Oklahoma’s Engineering Media Lab, who created an app that simulates complex shear forces. “It’s almost like apps are designed for engineers and yet we don’t use them!” Indeed, the majority of top-selling educational apps on iTunes are geared toward elementary and middle school students. While this market is “flooded with apps that you can reference to solve many engineering problems, from finding the moment of inertia of a regular volume to numerically solving integrals to calculating the area of a rectangle,” notes Georgia Tech’s Okseniuk, none “use high-end modeling algorithms in simulating physical problems,” as Rimoli’s game does.

Truss Me! teaches optimal design techniques through building and testing virtual stick structures to see if they will support a weight or snap. A freestyle mode offers endless possibilities for experimentation. In the challenge mode, players tackle real-world problems and can move up to higher levels by designing increasingly lighter structures that are also safe. Instant visual feedback shows not only how the structure fails but also where the stresses are distributed when the design works. Players who reach certain milestones receive a golden nut – as in nuts and bolts – award. “After all, it is an engineering game!” says Rimoli. Earning a single nut is relatively easy. To get the maximum of three, however, players must be within 2 percent of Rimoli’s highest score, which can be “really complicated,” he adds. Only one person consistently beats Rimoli: a tool and die maker in Ohio, one of the more than 2,500 people who have purchased Truss Me! since its debut in the iTunes store last November.

Other engineering educators hope to join the app-using ranks. Oklahoma’s Gramoll, for example, has developed an app called HPC Torsion that allows students to calculate the “shear stress and total angle of rotation of a symmetrical solid bar” for up to 230,000 degrees of freedom. Undergraduates in a typical mechanics-of-materials course cover only circular bars. With Gramoll’s app, they can determine shear stresses in advanced noncircular torsion bars and cross sections, or “do some quick analysis” on, say, an octagonal shape.

Why have engineering educators been slow to develop apps? “There’s no reward, to put it bluntly,” maintains Gramoll. “It’s not highly respected in the tenure and promotion procedures, and along with that it takes a lot of time.” Moreover, app-makers also must know programming, which limits the pool to faculty with one foot in computer science and the other in engineering. It’s also a nightmare to get the app on iTunes, Gramoll adds, and just like textbooks, there’s scant likelihood of making enough money to justify the effort.

Georgia Tech undergraduate Okseniuk believes engineering professors who code their own mobile apps, like Rimoli and Gramoll, will remain scarce. But faculty could be brought onto projects as “technical and educational consultants.” He also predicts apps like Truss Me! will attract and teach foundational engineering concepts to a wide array of K-12 students. Okseniuk’s sister, a sophomore in high school, and their middle-school cousin “really enjoyed playing with the app,” he says. “They even sent me snapshots of the challenge-mode menu as they completed the levels.” Rimoli says state-of-the-art simulations can engage middle and high school students “to get into engineering without a dumbed-down version of an app.” Volunteering at a Latino STEM fair hosted by Georgia Tech recently, he found high school students were especially intrigued by Truss Me!

Oklahoma graduate student Jared Wilson had never used an educational app in an engineering course before discovering HPC Torsion. He found it an “excellent tool” for obtaining “numerical approximations to difficult equations quickly and freely.” In fact, the app inspired Wilson to conduct his master’s research under Gramoll – and build a computer simulation to model fluid flow around two-dimensional cross sections. He hopes the fruits of his “really fun” research will “help students when they need to calculate drag and lift coefficients.” It may even inspire some to build their own engineering apps.

There were no computer stores in his small Argentina hometown, so Julian Rimoli learned to program his own games. By high school, he’d parlayed a growing knowledge of physics into coding small, Angry Birds-style simulations. “I always had that in me,” says Rimoli, an assistant professor of aerospace engineering at the Georgia Institute of Technology. Thus it was only natural that, standing at the whiteboard teaching statics last year, he began wondering how to better convey loads and stress using computer simulations, because “things move around a lot.”

Alice Daniel is a freelance writer and instructor in journalism at California State University, Fresno.