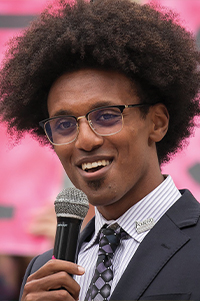 Engineering students may feel like they are herded into industry so their knowledge can be exploited. Familiarity with engineering law could change that.

Our nation’s generational wealth distribution is grossly disturbing. Capitalism, politics, pandemic, recessions, and wars are all culprits, but the U.S. STEM education system is also an accomplice to this extreme wealth gap. Engineering educators and administrators can do their part in bridging generational wealth gaps by weaving “legal engineering” into students’ academic curriculum. Understanding legal topics will empower engineers to claim or reclaim ownership of their work. And ownership yields wealth.

But first, some context. Zoomers (Generation Z) were born in the years 1997–2012, Millennials in the years 1981–1996. Zillennials are a microgeneration born roughly 1993–1998; these are the recent college graduates. According to the U.S. Federal Reserve, in 2020 Millennials and Zoomers each held only about 3 percent of the country’s net worth, despite collectively making up 42.4 percent of the population. Three percent for Zoomers makes sense, because most are still in school and have little to negative net worth due to student loan debt. But an approximately identical 3 percent for Millennials—some of whom have been in the workforce for up to 20 years—is abysmal, terrifying, and unsustainable for our nation’s future.

Intergenerational and interdisciplinary solutions are required. Economic efforts such as tax changes, debt absolution, and reparations will always make headlines. Engineering education should contribute by emphasizing the intersections of law and engineering throughout the curriculum.

Law seems to be one of the last remaining fields to be revolutionized by engineers. Many court dockets are most easily accessible via paper, while debates continue on how automation or artificial intelligence should transform the judicial system. Likewise, undergraduate engineering education barely intersects with law. Few engineering students enter the workforce understanding basic intellectual property protections such as patents, trademarks, or copyrights. In the real world, engineering and law go hand in hand, and when they do, they yield wealth.

Many U.S. engineering programs prepare students to enter industry. But this focus backfires if it is taken too far. Our country’s current wealth distribution is proof we are at a tipping point. Engineers’ brainpower is nothing but human capital to corporations. There’s a blurry line between “investing in your employees” and surreptitious intellectual exploitation.

It is almost as if our engineering programs—or shall I say farms—breed technically sound but ill-advised sheep that know nothing other than how to be herded. Every year engineering programs auction herds to industry at career fairs only for the naive engineers to have their wool sheared off for corporate profit. In exchange for their production, engineers are lulled into loyalty with perks and benefits that do not add to their immediate net worth. This compensation ultimately leaves engineers sheepish with less equity ownership of what they themselves produced and are entitled to.

I share this dire outlook on the engineering farm (rather than pipeline) based on my personal experience and research. It is my belief that legal engineering education could be the empowerment Zoomers need to break the cycle of generational wealth inequality. Legal engineering is a broad term that relates to topics such as patent law, intellectual property, automation of the legal and judicial system, consumers’ rights and privacy issues, corporate law, and engineering ethics and compliance.

For example, senior projects and master’s theses could include a requirement to file a patent, trademark, or copyright with the U.S. Patent and Trademark Office (USPTO). An incentive could be covering the associated fees.

What if each upper-level engineering course contained one relevant technical legal case or dispute? For instance, legal disputes currently occurring with social media giants or natural resource-affiliated corporations would be phenomenal supplemental case studies for engineering students to review in a low-pressure setting. We would produce better engineers and scientists if we normalized this. Taking it a step further, how about offering a legal engineering elective course within colleges of engineering?

Engineering educators possess the awesome power to produce holistic engineers who are legally competent. But until U.S. academia empowers STEM students with law, engineers will continue bleating about overwork while executives drift to sleep counting their sheep.