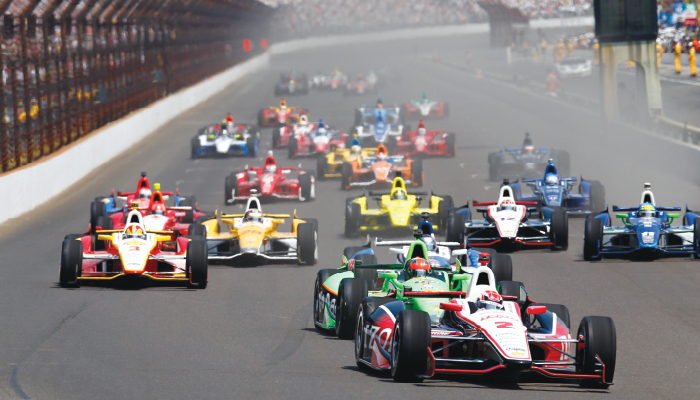 From racecars and football to cycling and scenic strolls, Indy suits any pace.

When the New York Giants defeated the New England Patriots here two years ago, most post-game chatter focused on Ahmad Bradshaw’s winning touchdown, Madonna’s halftime spectacle, and a startling on-camera gesture by rapper M.I.A. But the commentary cherished by Hoosiers, hosting their first Super Bowl, came from the likes of sportscaster Darren Rovell, who dubbed Indianapolis “the best Super Bowl city I’ve ever seen.” Not only did Indy defy skeptics and prove it had a fun side, but it also drew praise for convenience, with the game and all festivities taking place in the heart of the city. The well-designed blocks spreading out from the Lucas Oil Stadium to Monument Circle, a grand European-style plaza, form both the city’s historic center and central business district. This is where the action is, and attendees at ASEE’s 2014 Annual Conference and Exposition will find it just outside the Indiana Convention Center. That’s right—in a city famous for auto racing, you don’t need a car to get around.

This is exactly what city leaders had in mind when they began revitalizing downtown Indy in the 1980s, a century and a half after the town was incorporated as Indiana’s capital. As the once sleepy area grew into an entertainment-driven sports capital—home to the Super Bowl champion Indianapolis Colts, the WNBA champion Indiana Fever, the NBA’s Indiana Pacers, an Indianapolis Indians AAA baseball team, and the NCAA headquarters — they made sure to integrate all new stadiums into downtown’s existing business and historic districts. Their vision, now complete, inspired an urban renaissance by a creative class celebrating Indy’s local character through art, food, and innovation. You’ll see the results as you explore downtown and its abundant public artwork, including murals painted for Super Bowl 46. You’ll hoist a pint of craft beer brewed a few blocks from the bar. You’ll merge with locals on the Indianapolis Cultural Trail, a new $60 million pedestrian path linking every major downtown destination. Don’t be surprised to find yourself saying hello to strangers. Hoosier hospitality is contagious.

If you’re familiar with Washington, D.C., and attuned to urban design, Indy might seem familiar. The Circle City was platted by an apprentice of Pierre L’Enfant, the man behind the layout of radial streets and extended green spaces of the nation’s capital. Originally one square mile, Indy took shape around Monument Circle in 1825, and the city center, called the Mile Square, still revolves around the brick plaza at the intersection of Meridian and Market streets. It’s a giant roundabout, with traffic circulating on all sides. At its center is the Soldiers and Sailors Monument, Indy’s postcard attraction, dedicated in 1902 to Hoosiers killed in war, including those serving when Indianapolis was a center for Union campaigns in the Civil War. This 284-foot limestone obelisk, crowned by a sculpture of a winged Nike, Greek goddess of war, is the site of festivals and lunchtime concerts and is often filmed from the Goodyear Blimp during televised sporting events. People relax on its steps in the sunshine and on starlit nights, enjoying the buzz of the city around them. Large turquoise reflecting pools spill into stone bowls, originally watering holes for horses. An observation deck near the top can be reached by stairs or an elevator. It’s a tight fit up there, though, and taller buildings limit the view. For a wide-open panorama, go to the little-known free observatory occupying the entire top floor of the City-County Building, two blocks east on Market.

The five blocks north of the Circle are devoted to parks and military monuments, again reminiscent of the nation’s capital. In fact, Indy dedicates more space to veterans’ memorials than any other city besides Washington, D.C. It’s unusual to find so much picturesque parkland in the middle of a metropolis, and there’s even more green space to the west of Monument Circle. A few blocks away — and directly across the street from the Indiana Convention Center — lies the 250-acre White River State Park with sidewalks leading right to its grassy esplanades. This urban park serves as a museum campus, too. The Indiana State Museum, the Eiteljorg Museum of American Indians and Western Art, the NCAA Hall of Champions, and the Indiana History Center are clustered together along a peaceful pedestrian-friendly canal. The Indianapolis Zoo and White River Gardens sit just across a broad footbridge.

White River State Park and the Indiana War Memorial Plaza are both ideal places for a stroll or a run. To learn more about the area’s history and architecture as you go, download the free Walk Indianapolis audio tour (walkindianapolis.com).

As for the radial streets, it’s no coincidence that the two angling north through downtown are named for Union states (Massachusetts and Indiana avenues) and the pair heading south are dubbed after border or Southern territories (Kentucky and Virginia avenues). Mass Ave is now a lively arts and entertainment district, lined with independent bars, restaurants, theaters, and shops. In the summer, locals flock to the outdoor beer garden at the Bavarian-style Rathskeller. When you enter the gigantic brick building, notice the wooden track on the stairs. This was intended for bicycles when the building was constructed as an athletic and social center for the city’s German community near the turn of the century.

Last year the city cut the ribbon on this innovative pedestrian and cycling path, constructed in stages over much of the past decade. Civil engineers in particular might be interested to see how eight miles of trail were integrated so seamlessly into the heart of the city. Recreation trails that lead through a city are rare; most take walkers and bike traffic away from the hubbub and out to wide-open spaces. But downtown Indy has plenty of parks and no traffic congestion—the perfect conditions for an urban recreation path. The Cultural Trail—so named because it links downtown’s five designated cultural districts—passes right by the Indiana Convention Center. To see its full glory, take it north on Capitol, east on Washington, and north on Alabama Street to Mass Ave. Want to cover more ground? Rent wheels at the trailside Indy Bike Hub, or join a guided run or bike tour with Active Indy Tours.

If you’re into machines, you can’t come to Indianapolis and not visit the famous Motor Speedway. Five miles west of downtown in a town called Speedway, the track sees racing only four times a year, but it’s open to visitors every day except Christmas. Drive under the stands and emerge in front of the Hall of Fame Museum, a fantastic collection of historic and modern cars. Spend time learning about the Speedway’s fascinating origins;

Shortly after the turn of the century, four Hoosier auto-industry titans concocted the idea of a race as a testing ground for their innovations. The car that won the inaugural Indy 500 sported what is believed to have been the first rearview mirror. Today, major auto manufacturers continue to develop better tires and other safety features at the motorsports cathedral.

You can take a ride around the banked 2.5-mile oval in a van and make like an Indy 500 winner by kissing the yard of bricks, a remnant of the original track surface. But don’t stop there — hunker down in a real racecar at the Dallara IndyCar facility in Speedway. Not only is the state-of-the-art factory open for public tours (and lunch at Lino’s Coffee, a café out of Italy); it offers rides in a street-legal IndyCar for $30.

Locals think it’s funny when visitors call their legendary St. Elmo Steak House “St. Elmo’s Fire,” the name given to a flare emanating from a pointed structure during a lightning storm. But the mistake masks a truth. Taste the wildly hot shrimp-cocktail sauce and you’ll probably make what Indy residents call “shrimp cocktail face.” Don’t be ashamed — many a pro athlete has succumbed to the burn of horseradish overload. That goes for quarterback Peyton Manning, too. (He was a regular and is still a business partner in St. Elmo’s sister restaurant, Harry & Izzy’s.) Take home a bottle of the sauce and see if your friends can handle what the Travel Channel called the spiciest food on the planet a few years ago.

Your taste buds might still be feeling it by the time you get your hands on a cold beer from one of Indy’s many microbreweries. Most restaurants serve a good selection of local craft suds — Sun King Sunlight Cream Ale is practically the official city beverage now — but if you’re an aficionado, make time for a trip to a tasting room. Sun King Brewing, Fountain Square Brewery, Flat12 Bierwerks, and the new Tow Yard Brewing are all located downtown. An insulating Sun King Freaker — best described as a sweater for your beer — makes a great $10 souvenir.

Downtown’s newest hot spot has cropped up on the southwest edge of the Mile Square. The Alexander hotel anchors a $150 million mixed-use development called City Way, and the boutique property’s outstanding artwork and restaurants draw non-guests every day. Located at Delaware and South streets, the hotel was the first in the country to display site-specific art installations curated by a major museum. Translation: It didn’t simply source art from a dealer or commission artists to create works without seeing the space. The Indianapolis Museum of Art, one of the 10 largest art museums in the country, saw to it that the Alexander’s artwork is the real deal — so much so that locals consider the hotel a satellite location of the museum. Two pieces are must-sees: a portrait of Sarah Breedlove, the African-American hair-products manufacturer and philanthropist known as Madam C. J. Walker, composed entirely of black hair combs and their shadow effects, and the light fixtures by MacArthur “genius grant” recipient Jorge Pardo, suspended like jeweled jellyfish in the lobby bar.

The Alexander is the geographic genesis of a blossoming dining corridor. Its Cerulean restaurant, Hoosier owned, plates up polished-walnut bento boxes at lunch and high-concept, fine-dining seasonal food for dinner. Ask to sit in the bird’s nest, a table shrouded in an architectural wooden structure. A few blocks away in the trendy Fletcher Place neighborhood, Virginia Avenue is home to foodie heaven Bluebeard, themed to Indiana’s most famous novelist, Kurt Vonnegut. Next door, brand-new Rook serves a roster of banh mi in a sleek shotgun space. If you’re in the mood for authentic Mexican sandwiches, pull up a brightly colored chair at Tortas Guicho Dominguez y El Cubanito and order the Salma Hayek.

With a four-level mall and cinema attached by skywalks to most downtown hotels, Indy has plenty to occupy families. But save time for the Children’s Museum of Indianapolis, the largest of its kind in the world. The ASEE conference coincides with one of the museum’s biggest blockbuster exhibits ever: the treasured terra-cotta warriors from China. The museum is their only venue in the United States in 2014.

For teens, a single name may be enough to lure them to Indianapolis right now: John Green. He’s the Indy resident who wrote the hit novel The Fault in Our Stars, and the movie version comes out in early June. For Fault fans, a trip to Indy is somewhat of a pilgrimage because the story is set here. One of the primary locations is 100 Acres: the Virginia B. Fairbanks Art and Nature Park at the Indianapolis Museum of Art, where Green’s wife worked. Parents, you won’t mind shuttling your teen to this free attraction, showcasing fun and contemplative sculptures integrated with the park’s meadows and lake. There’s even a tree trunk reimagined as a swing set and concession stand.

Megan Fernandez is executive editor of the Indianapolis Monthly.