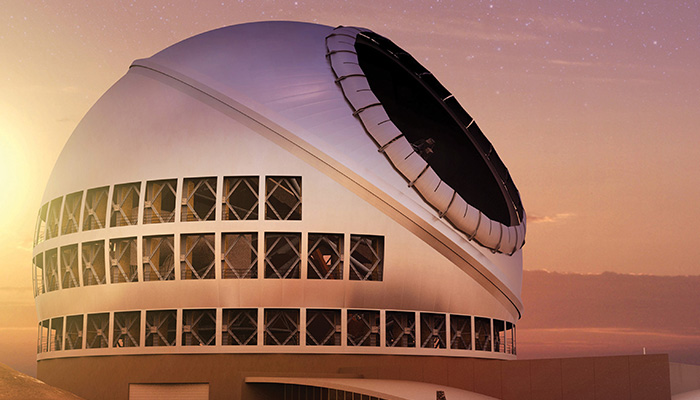 The clear skies above Hawaii’s Mauna Kea make the site ideal for a giant telescope. That’s assuming engineers can shield it from earthquakes, fierce winds, and extreme temperatures.

Scheduled to open — or, in astronomer parlance, “see first light” — in 2024, the $1.4 billion Thirty Meter Telescope on Hawaii’s Mauna Kea will be the largest in the world. Its mosaic-like network of hexagonal mirrors, operating in concert, will form the equivalent of a 100-foot-diameter mirror. An unprecedented light-gathering ability — more than 140 times than that of the Hubble Space Telescope — will enable astronomers to look back more than 13 billion years in space, as close as humans have ever come to witnessing the immediate aftermath of the Big Bang. Yet while most eyes will no doubt be trained on the TMT and the stunning images it captures, engineers will be gazing in wonder at the structure that houses it: a 20-story-high marvel of design and the most advanced observatory in the world.

Building an enclosure for a large telescope is never a simple proposition. The telescope itself is a delicate instrument; it has to be able to track stars and other stellar bodies with unparalleled precision as they appear to travel through the night sky; a slight force or breeze can knock it off track; and any difference in temperature between the enclosure and the ambient air outside will degrade its optical performance. The role of the dome is central to TMT’s success. Jerry Nelson, the University of California, Santa Cruz astronomer who pioneered the signature segmented mirrors on the Keck telescopes — also on Mauna Kea — flatly states, “The telescope doesn’t work if the dome doesn’t work.”

In the case of TMT, the challenges are compounded by the location of the observatory. Ye Zhou, president of the dome’s designer and builder, Dynamic Structures of British Columbia, Canada, describes TMT’s site as “the worst of the worst”: a few hundred feet below the 13,796-foot summit of the dormant volcano. The skies above the site are some of the clearest in the world, with virtually no light pollution. “But it’s also an active seismic zone,” Zhou states. “We have to design it to survive a once-in-a-thousand-year earthquake. It also has to be able to return to service within two weeks from a once-in-200-year earthquake.” And then there are the winds. The telescope has to be capable of operating in winds as strong as 100 kilometers an hour (62 mph) and the observatory tough enough to withstand blasts three times greater.

The sturdiness of the $150 million building will come partly from its shape: a spherical dome designed to deflect winds. To minimize the effects of earthquakes, TMT will feature lateral guides distributed along the perimeter of the dome with multiple “fuse elements.” These are structural components such as girders, beams, and trusses strategically placed in the structure that, in the event of an earthquake, can deform or even break, dissipating some of the seismic energy, and still leave the building relatively unscathed. They are also situated so they can easily be replaced in the event they are destroyed. Shock absorbers installed under certain components will also cushion the impact of any excessive ground shake.

There is a balancing act here. The structure needs to be rigid enough for regular operation of the telescope but flexible, or malleable, enough that an earthquake will not cause it to collapse. Zhou says the dome’s design will eschew super-strong metals, as these tend to be brittle. Instead, designers will rely on the regular high-strength steel used in bridges and high-rise buildings.

Another challenge on Mauna Kea is the temperature extremes, which can vary from minus 20 degrees Celsius (minus 68 degrees Fahrenheit) to plus 40. This might not pose a problem if the observatory housed something conventional, but a telescope is anything but a regular piece of machinery. Temperatures inside and outside the structure must match as close as possible. TMT’s dome is equipped with 98 vents around the building that can be opened to provide adequate ventilation.

In addition, the opening for the telescope in the dome has a series of 4-by-5-meter aperture flaps or “eyelashes”— aluminum fins that can control the air flow over the dome and reduce gusts from buffeting the delicate alignment of the telescope mirrors, which feature a network of supports and actuators underneath each segment that control the deflection caused by gravity on the glass and maintain the overall perfect parabolic shape down to the micron level.

Even the paint had to be considered in the overall design. The telescope itself has air conditioning in its structural tubes. But air conditioning a building the size of the TMT dome would be prohibitively expensive. Heating such an enclosure would also prove costly, so designers had to figure out a balancing act. The old-style pure white dome reflects a lot of the sun’s daytime energy. The problem is, a good reflector is also a poor emitter of radiation, so the dome tends to become hotter than the night air. Then there is the environmental aspect. As Raymond Carlberg, a professor of astronomy at the University of Toronto and the project’s Canadian director, points out: “People don’t want to see a big white telescope on top of their mountains anymore.” The TMT dome will be covered in a reflective, aluminum-like finish, which has a low solar absorption. It also reflects the colors of the sky and the ground. This will help the dome blend into its setting and reduce the visual impact — whether the mountain is bare or covered in snow.

There are deeper objections to TMT than to how the structure looks. Some indigenous Hawaiians view construction of another telescope on Mauna Kea, which is already home to 13 others, as a desecration of a mountain revered as a sacred burial ground and “a temple of supreme deity,” as opponent Kealoha Pisciotta put it on a PBS Hawaii program last spring. “There’s huge significance,” said Pisciotta, president of Mauna Kea Anaina Hou, which has tried to block construction through government channels. A series of protests have been staged on the mountain itself, including one that led to the arrest of eight people in early September. Hawaii’s governor, David Ige, has pledged that by the time TMT starts operating, three or four of the aging telescopes nearby will be dismantled.

The circular opening that allows the telescope to peer out of its mountain-top aerie is only a meter wider than the total mirror diameter, which will minimize the effects of winds on the telescope. Typically, large telescopes like the 10-meter Keck 1 and 2 telescopes use garage-door-like shutters weighing 50 tons or more that move up and down. The sheer size of TMT would require even larger doors, and motors with thousands of horsepower to move them. That would come with a high price tag for electricity in such a remote spot, not to mention the cost of the motors themselves.

“These motors also create a lot of heat which then messes up the air inside the enclosure,” says Carlberg. Instead, the observatory will feature a disc-shaped shutter that covers the opening. “The beauty of TMT’s design is that the shutter has a counterweight on one side and an axis in the middle of the disc, so you are not lifting anything, you are just overcoming friction,” Carlberg explains. “The cover is pulled in from the outer shell and rotated 180 degrees out of the way. You can accomplish this with motors that are only tens of horsepower.” In the event of snow or rain, the shutter can close within five minutes.

One of the other unique elements of TMT’s design is how it can move in two directions simultaneously. The base rotates on a horizontal track; the top half — the cap — is inclined and rotates at a 32-degree angle. Both motions will enable the telescope to point anywhere from vertical to 65 degrees down towards the horizon. “Most big structures like bridges and dams are static,” Zhou points out. “They stay there. But this one has two parts that need to move at the same time — and they have to do it extremely precisely, smoothly, and with great reliability.” That will be accomplished with an inclined track and a series of 24 custom-designed bogies riding on a rail somewhat like a roller coaster track.

Dynamic Structures already has experience with inclined tracks through its entertainment division, which has designed a host of theme park rides, including Universal Studios’ Harry Potter and the Forbidden Journey ride. One of the main differences between the rails for a telescope and a roller coaster, however, is the weight. Roller coaster cars weigh only a few tons, but TMT’s cap weighs more than 800 tons. “Plus, we have to move it with a precision of millimeters,” Zhou states. The bogies are specially designed to be strong enough to hold the cap structure, but also flexible enough to accommodate the deflection of such a large structure in high winds. The optimum combination of strength and flexibility is delivered by a series of driving and idler wheels preloaded by compact springs filled with nitrogen.

All of the bogies, drive mechanism, and gearbox will be housed in the “interstitial space” created by a truss structure covered on both sides, forming an inner and outer skin of the dome. This space, between one and two meters in width, shields all the mechanical parts from the elements and also eliminates the likelihood that any part, especially in an earthquake, could fall from the dome onto the telescope itself.

Astronomers around the world like Carlberg are relying on the synergy of the Dynamic Structures team. You can sense his anticipation of what awaits in the next decade. “After the Big Bang, the universe cooled for several hundred thousand years until the first stars were formed,” he explains. “We don’t know much about them. They are different from the stars today because they were formed only out of hydrogen and helium, unlike current stars that have other elements, such as carbon, nitrogen, and oxygen. With TMT we’ll be able to see them for the first time. We’ll be looking back literally to the first light.”

Pierre Home-Douglas is a freelance writer based in Montreal and a frequent Prism contributor.
Design by Michelle Bersabal
Images courtesy of TMT International Observatory