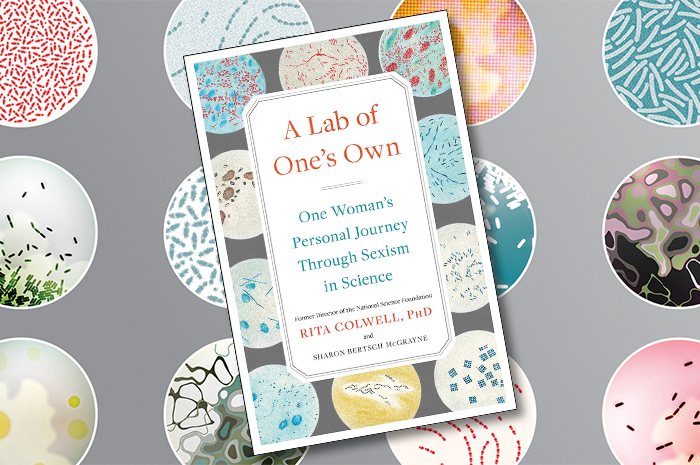 Credit to Her Sex

A distinguished researcher describes the barriers she faced as a woman in the sciences and offers recommendations for removing them.

A Lab of One’s Own: One Woman’s Personal Journey Through Sexism in Science
By Rita Colwell and Sharon Bertsch McGrayne.
Simon & Schuster, 2020. 288 pages.

Rita Colwell has had an impressive career as a researcher. An environmental microbiologist specializing in infectious disease, she helped change the paradigm for understanding cholera, worked on global Ebola initiatives and anthrax research, and served as the National Science Foundation’s first female director. Most recently, her private bioinformatics company, CosmosID, joined with Maryland officials to track signs of COVID-19 in local wastewater.

Those accomplishments are all the more remarkable given the rampant gender discrimination Colwell faced at every step. Her odyssey, compellingly told in A Lab of One’s Own, shores up observations with data-driven research and offers solid recommendations for improvement. The result is an informative and sobering account that should prompt readers to consider biases and barriers in their own science and engineering workplaces.

The issue, argues Colwell, is not how to attract women to science but how to dismantle barriers blocking their full participation. Each year since 2000, she and her coauthor note, women have earned more than half of all science and engineering bachelor’s degrees—and more than half the doctorates in the life sciences. Yet they secure only 39 percent of postdoctoral fellowships and 18 percent of professorships. It’s not for lack of interest, asserts Colwell: “Everywhere I’ve looked, there have been hidden figures, working in the shadows of their husbands’ labs or in the labs of male allies, in the medical museums and libraries, in government agencies, or in low-level teaching positions across the country.”

Colwell faced obstacles from the outset. Her ambition of pursuing bacteriology research at Purdue after earning a bachelor’s in the subject there in 1956 met with swift rejection. “We don’t waste fellowships on women,” her biology professor scoffed. “The only degree you’re going to get is in the maternity ward of the hospital.” Though “not my first love,” Colwell shifted to genetics—because the lab would take on a female researcher. The mother of two credits her husband and colleagues for supporting her during those early years, when having a baby “meant permanent leave.” Even today, nearly half of female scientists in the U.S. leave full-time employment after the birth of their first child, while those who remain typically have fewer children than their male counterparts. Universal, affordable, high-quality childcare “is the most important issue a woman scientist can speak up about,” the book stresses.

Throughout her career, Colwell was “discounted as a woman scientist.” She anticipated opposition when proposing a new framework for understanding cholera in 1971—but not the ridicule and antagonism she encountered. She plowed ahead, forging cross-disciplinary research alliances. Today, her findings that cholera exists in the wild, and can lay dormant until weather and temperature conditions cause it to grow in bodies of water, are widely accepted. That acceptance took over two decades, however, and Colwell believes the resistance was often due to sexism.

Her book highlights similar examples. Like Colwell, MIT molecular biologist Nancy Hopkins adjusted her ambitions and toiled harder to prove herself. In 1993, she reached a breaking point. Denied larger lab space, Hopkins measured every lab in the School of Science. Some “male” labs, she found, were four times bigger than hers; those of senior male professors averaged 3,000 square feet, compared with 2,000 square feet for senior female faculty. Her findings—and outrage—prompted MIT’s leaders to appoint her to head a committee on gender disparities in areas from salaries to teaching loads to equipment. Their seminal report, released in 1999, became a blueprint for institutional reform nationwide, demonstrating what women can achieve when united in pressing for change.

The book illuminates similarly pivotal studies, including the 2018 National Academies’ report on sexual harassment in academic sciences, engineering, and medicine, and updated requirements to address scientific misconduct. Perhaps most helpfully, Colwell concludes with concrete actions for students, female professionals, male allies, and those in a position to affect policies. “We are in a century of breakthroughs in science, technology, and engineering,” the authors conclude. “There is so much left to do—but also so much that we can do.”