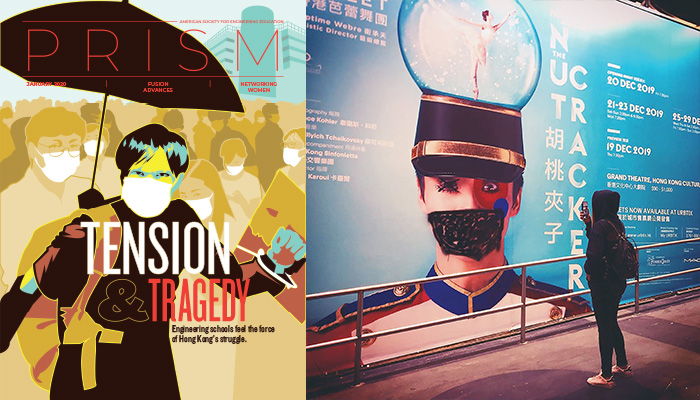 HONG KONG – It’s impossible to pinpoint exactly what propelled protests to flare across university campuses throughout this city, but one pivotal moment came November 4 when police dispersed demonstrators in a residential compound near the normally tranquil campus of the Hong Kong University of Science and Technology in upscale Clear Water Bay. As they did so, Chow Tsz-lok, 22, a HKUST second-year computer science student, fell from the third to the second floor of a parking lot. He died of his injuries four days later, becoming the first known fatality in the disturbances.

Afterward, universities seemed to ignite amid cascades of tear gas and clashes between police and protestors, who hurled homemade bombs and bricks. As fires broke out, students were trussed up and arrested in large numbers. “It was kind of crazy,” recalls Jenny Koo, a Korean student of computer engineering at HKUST, one of the major engineering schools in Hong Kong. “I saw everything unfold around me, and hoped that it would die down. November was when everything got bad.” An engineering student on another campus wrote despondently on his blog: “Our campus became a war zone, our pitch [soccer field] had loads of bullets, our facilities were ruined and our hearts were broken.” As student strikes spread through the city, administrators closed campuses. Many students were evacuated.

In scenes more commonly associated with Middle East flashpoints, Hong Kong in recent months has faced what many here say is the most furious street violence ever seen in the former British colony. Demonstrations weren’t limited to students or schools. Citizens old and young swarmed streets in record numbers, at one point occupying and shutting down one of the world’s busiest airports. Subway stations were trashed and set ablaze and hostile pro-government mobs attacked protestors.

The current protests began in June, marked by demonstrations drawing record crowds. News outlets reported that over a million people—of a total population of seven million—took to the streets to protest legislation that would have authorized extradition of criminal suspects to China without a normal judicial process in Hong Kong. The bill was the latest in a series of measures widely seen as tightening Chinese government control over Hong Kong, which had been assured a measure of continued autonomy for 50 years after its handover from Britain to Beijing in 1997. Surfacing long-muffled discontent, the demonstrations gave the lie to the notion that citizens of this financial hub cared more about commerce and profit than political freedom. A decision by Hong Kong’s government to pull the extradition bill failed to quell the public outrage. Instead, protests just grew louder.

“We aren’t part of China, that’s what this is all about,” says an organizer who identified himself only as Anti, speaking during a pro-democracy United We Stand rally held on the waterfront in mid-December. “We are Hong Kong people. This is our place, Hong Kong. And we are going to fight to keep it.” Outside the rally, students could be seen putting up defiant posters and pinning letters of support to so-called Lennon Walls, a form of anti-government protest that originated in Prague following the assassination of John Lennon and was adopted more recently by Hong Kong’s Umbrella movement. On a sign board, a young woman had listed what she claimed were the multiple types and large quantity of ammunition expended by police on a single day in Hong Kong. At the bottom, she had scrawled: “In 1949, Chinese academics had fled China from Communism and founded CUHK [Chinese University of Hong Kong]. 70 years later, in 2019, students defend the core value of Hong Kong.”

Hong Kong universities have longstanding ties to American institutions. In a notable example, Tony Chan, HKUST president from 2009 until he stepped down in 2018, came to the university from the National Science Foundation, where he had headed the Mathematical and Physical Sciences Directorate from 2006 to 2009. Prior to that, Chan held a series of positions at the University of California–Los Angeles, the last being dean of physical sciences. A member of the U.S. National Academy of Engineering (NAE), Chan is now president of the King Abdullah University of Science and Technology in Saudi Arabia. In another example, the City University of Hong Kong has participated in the NAE’s Grand Challenge Scholars program.

The extent of students’ involvement in the violence that rocked their campuses is a matter of debate, although there is no question some were involved. Government and police—and many university sources—say the clashes were largely instigated by non-student demonstrators, a stance widely disputed by protest organizers, students, and some faculty, who spoke on the condition of anonymity for fear of arrest and possible reprisal. “What started as a peaceful protest, and had been going in one direction, and one direction only, suddenly exploded into violence, and that now remains a component,” says a lecturer at Hong Kong University, a stately public institution established in 1911 that traces its history back to the Hong Kong College of Medicine for Chinese, founded in 1887. A major center of research, it is the oldest tertiary institution in Hong Kong. In November, it became the latest campus to ignite in a scorched-earth series of running battles between police and demonstrators. “I remember showing up, and noticed all along the street, the bricks had been pulled up,” recalls the lecturer, who insisted on anonymity. “And all these fences and shopping carts were pulled over. That was when it first struck me,” he recalls. “It was like the preparations for a pitched battle. It felt like Paris in Les Misérables.”

He had an inkling of what to expect when demonstrators occupied the Chinese University of Hong Kong. There, police seized more than 3,900 Molotov cocktails in a single day, and news reports quoted Kwok Ka-chuen, a police spokesman, as saying the campus had been transformed into a “manufacturing base” for firebombs. “It was really scary,” the teacher says of the battlefield to be. “I saw all these bottles—Molotov cocktails in preparation. And everyone had masks—for the tear gas. You could see the battle brewing.”

Normally sedate Hong Kong Polytechnic University took on a dystopian aspect as police cordoned off the campus and made blanket arrests. Trapped inside, some students sneaked under cover of darkness to an overpass, then slithered ninja-like down ropes to waiting vehicles, which the tech-savvy demonstrators had summoned using phone apps. Hong Kong Poly, considered one of the top local engineering schools, shut down in November, and workers say they still have no idea when it will reopen. “Everything’s a mess inside,” says one exasperated teacher as he exits the locked-down campus. “They are still going through classrooms, cleaning up. They don’t really tell us anything.” In mid-December, burly security guards sat at every entrance, and large yellow fencing surrounded most of the campus. At the nearby train station, trashed during the protests, ticket machines displayed: “The recovery work for University Station is still in progress, the station will remain closed and trains will not stop at this station.” Google maps flashed an advisory: “The Hong Kong Polytechnic University may be permanently closed.”

A professor offers a visitor an informal tour, showing a muddy roadway, once solid brick, where “the students tore up the bricks to throw at the police.” On a rise, he points through trees to the school pool. “That’s where they were testing their Molotov cocktails.” Police detained over 1,100 people at Poly, after setting off more than 1,000 canisters of tear gas. “It was madness,” the professor says. Of the radicalized students, whom he considers misguided, he says: “We call them violent radicals to differentiate from the peaceful protestors.” His comment reflects a view heard elsewhere in the city—that violent protestors are little more than a privileged elite, traitors, or rioting thugs. The pro-democracy movement, overall, has drawn strong public support, as registered in the defeat of pro-Beijing candidates in a recent local election.

Looking Beyond the Crisis

As demonstrations continued, students, teachers, and administrators on various campuses used technology to try and salvage the fall term. “To ensure the safety of our students, faculty and staff members, the HKUST campus was closed for a week,” explains Tim Kwang-Ting Cheng, dean of engineering. Quickly, however, the university instituted a more innovative response that allowed it to continue functioning. On November 13, administrators decided “to temporarily change the mode of instruction for the remaining weeks of the fall term,” the dean says. “For undergraduates, all the course delivery was changed to online mode. In addition to existing online teaching infrastructure already in place, HKUST acquired a site license of Zoom to increase the capacity and functionality for online teaching, allowing all instructors to use the professional version of online meeting tools to either offer live lectures or prerecorded lectures with online Q&A.”

Other universities adopted similar measures. At the Chinese University of Hong Kong, where videotaping of lectures is a longstanding practice, recordings were consolidated into a virtual library. Some instructors had taken precautionary measures long before campuses became besieged. “The protests began in June, before the start of the semester. Even while preparing my course, I realized it might not run as usual,” says Rosanna Yuen-Yan Chan, an adjunct assistant professor in the Department of Information Engineering. “I had this thought that students might not be able to attend the lectures. As a teacher, I adapted my scheme to prepare for alternatives.” In addition to existing video lectures and online instruction, she devised a more interactive approach. Assigning students a set number of blog posts, she encouraged them to comment and analyze. “It showed that students can do a lot outside campus,” she says. “Even if they can’t travel to class, they can still handle the course.”

Universities adapted in other ways, as well. Some offered the option of pass-fail credit in place of grades, and either cancelled end-of-term exams or rescheduled them for January or February, when, officials hope, enough stability will have returned to allow on-campus proctoring of the tests. “Faculty are very unified and highly supportive to collectively address the challenges we have been facing,” says Cheng at HKUST. “We all understand the extraordinary circumstance [and] that we need to offer sufficient flexibility without compromising academic integrity.”

Student Jenny Koo says that when campuses closed, students from outside of Hong Kong found creative ways to reach the airport, avoiding protest hotspots and closed rail lines. “It was definitely eye-opening,” she says. For her parents, she adds, the unrest called to mind the massive pro-democracy protests that shook South Korea during their own student years.

Anxiety over the future is widely shared. “Nobody can really think China is going to suddenly back down and give Hong Kong independence,” says one teacher, echoing a common refrain. “I really worry about where this is going, and where it might end up,” he adds. Among other repercussions, the protests have exposed a widening rift between Hong Kong citizens and mainlanders. At local universities, where this division is noticeable in competition among students for admission and among academics for tenured positions, there have been reports of administrators taking heat on two fronts: They are chastised for not being more protective of mainland students, and criticized for not championing students’ free speech.

A senior university executive confides: “My personal view of the universities is they are in deep crisis. Many of them saw the departure of mainland students in recent times, and most likely student applicants for 2020 will drop significantly. This will affect many things, as you can imagine, including research and rankings.”

Mourning for student Chow Tsz-lok continued into mid-December, when thousands attended a memorial service arranged by his family. The South China Morning Post reported that HKUST President Wei Shyy and engineering dean Cheng were there.

Ron Gluckman is a freelance writer based in Bangkok.
Image Courtesy of AP Images
Design by Francis Igot