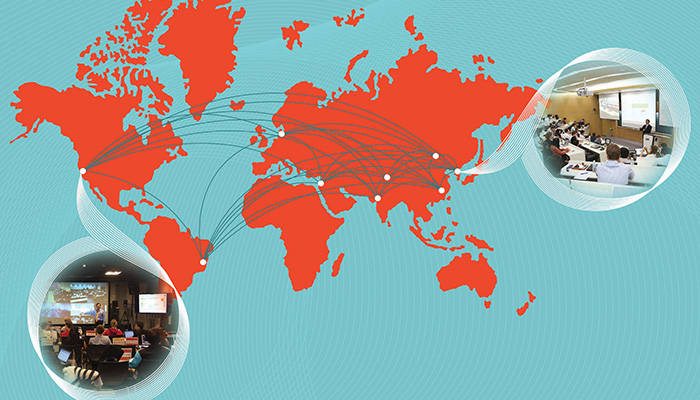 An 11-university series of virtual courses reaches across oceans and cultures to promote global collaboration and shared learning.

Starting next fall, every aspiring engineer at the University of Southern California will take at least one course in a virtual classroom linking Los Angeles with Beijing and Taipei, perhaps, or with Haifa, in Israel, and Aachen, Germany. Ice breaking cross-cultural exercises will show that no, U.S. campuses are not all frat parties and football and yes, East Asian students actually have a social life. As the class moves on to shared projects, more assumptions will dissolve: Germans may not be the default project coordinators, nor Asians the researchers, with Israelis arguing and Americans making the final presentation.

The courses are part of iPodia, a “classroom without borders” launched in 2009 that links USC’s Viterbi College of Engineering with 10 world-class engineering schools in a series of courses designed to promote peer-to-peer learning and global collaboration. The 2016 academic year will mark iPodia’s coming of age at USC, with every engineering department mandated to offer at least one course in the program and each USC engineering major required to take one iPodia class. The program also attracts a number of business students.

iPodia is the brainchild of Stephen Lu, a USC professor of industrial and systems engineering who claims to “really hate teaching,” or at least the kind where a lecturer delivers content while students listen passively. One of his main research topics is collaborative engineering, and he thinks it should start with undergraduates. What better way to develop the teamwork skills required of 21st-century engineers than to have students from vastly different cultures, separated by oceans and continents, engage in peer-to-peer learning and joint projects?

Taught by individual instructors or multinational teams in several countries at once, iPodia is built around strong student participation, taking into account varied learning styles, levels of preparation, and facility with English. Based on the theory that “what you learn depends on with whom you learn,” classmates of different nationalities share ideas – what Lu calls “co-constructed knowledge ‘contexts’” – before, during, and after class using various web tools, including WebEx, Adobe Connect, Skype, Google Hangout, and BlueJeans.

iPodia matured at roughly the same time as massive open online courses – MOOCs – which provide elite university teaching to a seemingly infinite number of students worldwide. While both iPodia and MOOCs use web and video technology to beam classes around the world, iPodia is centered on students in the participating classrooms and emphasizes interaction among classmates in different countries.

Pure science can be taught solely with content, but in engineering, “context is what’s needed to make sense of the material,” Lu argues. “If you can talk to people who think differently, then you actually learn more to enhance contextual understanding.” Students can see and hear students in classrooms an ocean away, pose questions, and make comments. And because each class is in familiar surroundings, students tend to feel more confident about speaking up, Lu says.

A typical iPodia course might be beamed to rooms full of students at three of the 10 partner schools. Large screens in front of each class display two other classrooms, each standing alongside a central screen featuring the instructor. In preparation for the class, students are expected to bone up on the content through reading, watching videotaped lectures, and viewing slides. They then complete a “pain index” survey, noting the material they find most difficult to grasp. A student who struggled with a particular concept will be matched with others who found it easy and who can explain it via online discussions and email. “Sometimes they end up more confused, but on the whole, there are big increases in student understanding,” says Ian Freed, a USC senior who took an iPodia course last spring and then was hired as a teaching assistant with the program. Instructors also tailor lectures and other material to address student responses. International teams of students from each campus stay in virtual touch through the semester and share joint projects. A final phase might include a two-week visit to a participating country, where teams work face-to-face to complete a project. An iPodia trip to Israel was a high point for Peking University student Xinrui Feng, acquainting her with U.S. and Israeli students and how they think. She also made a number of new friends among fellow Chinese students.

Cross-cultural exercises have included, “Describe a successful product/service that fails in a different culture,” “Document the daily life of a typical college student on your home campus,” and having students identify five artifacts that would be totally unfamiliar to students across the globe. In one such exercise, USC students produced a video about life on their campus, while their East Asian counterparts produced one on how they imagined USC life to be. In the latter, “they played to stereotypes – frat parties, playing football all the time. There was some truth but a lot of exaggeration,” Freed recalls. Still, “they had a better understanding of what we were like than we had of what they were like.” For one thing, the Asians are not total grinds. “There’s a social aspect that none of us really expected.” This came through vividly to Lyssa Aruda, another iPodia student and later TA at USC, when she saw a Harlem Shake video produced at 4 a.m. by students in a library at the Korean Advanced Institute of Science and Technology (KAIST).

Project assignments build on cross-cultural themes. In 2013, international teams conducted market research on toasters, exposing them to bread varieties around the world, and then sought to determine which design features – two or four slices, a bun warmer, plastic or brushed steel – stood to earn a profit. Freed’s class sought ways to make use of discarded bicycle tires on campus. Their solution: repurpose the tires as rubberized concrete for community playgrounds. For a project that culminated in a visit to Beijing by students from the United States, India, and Israel, an iPodia class teamed up with a Chinese company, GizWits, “to produce a life-sized chess set that could move via remote controls.”

Project presentations brought their own cultural surprises, Aruda recalls. Whereas students from laid-back L.A. produced something “rigid, bland, and professional,” the work by students at hyper-competitive Peking University was “more colorful and light-hearted,” with smiley emojis.

Courses should have “an interdisciplinary and intercultural core,” iPodia materials say; “a focus on emerging subjects that are of global importance”; and should promote “active learning on a global scale.” These requirements offer room for such broad themes as “Principals and Practices of Global Innovation,” as well as a specialized graduate-level course offered at USC and Peking University on “Technology of Unconventional Oil and Gas Resources Development,” which explores the geology and technology needed to exploit these resources.

There have been glitches and growing pains. iPodia’s organization is complex. Scheduling across time zones and the disparate academic calendars of these universities has been a struggle. Communication between schools has broken down at times. Cross-cultural projects, while attractive in concept, can be hard to implement. Team coordination was cited as a problem by a number of USC students in an iPodia survey. They also noted a “disconnection between content and project.” A study led by Ang Liu, who helped develop iPodia while a USC student and now manages the program as a non-tenure-track faculty member, compared a globally distributed iPodia team project and a project conducted locally at a single university. The local teams did better, outperforming globally distributed teams “in terms of all measures of team effectiveness.”

At the same time, iPodia scored well in preparing innovators for a global workforce. Applying two instruments used by STEM and engineering education researchers, iPodia students were compared with a National Science Foundation-funded national sample. In both preparedness for the global workforce and propensity for innovative thinking, iPodia students came out ahead, indicating the program’s “significant positive effect,” according to a paper co-authored by Liu, Lu, and USC associate professor Gisele Ragusa, who specializes in engineering education. Aruda says iPodia “astronomically” boosted her ability to perform on an international team.

iPodia also got high marks in a student satisfaction survey, with most respondents saying they would recommend it to friends. Indeed, some iPodia classes have three times as many USC applicants as slots, Liu says. Students find it particularly valuable as a networking venue, he adds, often forming relationships that continue long after the term is over. “The best value is dealing with people from other places,” Freed agrees. iPodia has won global recognition as well, with Lu being awarded the 2015 Duncan Fraser Global Award for Excellence in Engineering Education from the International Federation of Engineering Education Societies.

While instructors at partner schools have performed well, Liu says, he wants to see more of a “strategic commitment” from the universities themselves so iPodia can “scale up.” Right now, some still view it as a pilot project. For his part, Lu hopes for stronger faculty buy-in, which he calls “one of our major challenges.” At USC, under Viterbi’s new policy, that seems assured. “Faculty are fine with it. Many of our faculty are enthusiastic about the iPodia program,” says Dean Yannis Yortsos.

The bottom line for Lyssa Aruda, now completing an accelerated master’s in engineering management, became clear during a job interview in which she could explain newfound cross-cultural communication techniques. She landed a job with the global technology consulting firm Accenture.

Mark Matthews is the editor of Prism.
Design by Michelle Bersabal
Image courtesy of iPodia