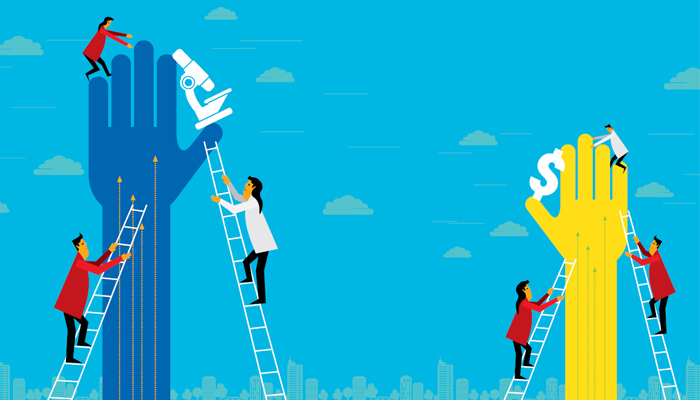 For generations, academics have accepted that tenure is bestowed upon those who excel at research. This has proved especially true in engineering programs, the majority of which are at research universities. And teaching? A prominent ASEE member is blunt: “The only thing that really counts is the number of papers that you publish and the number of dollars you bring in for research,” says the veteran faculty member, who asked for anonymity because the topic is so sensitive. “An outstanding teaching record isn’t going to get you tenure.”

Some educators and programs are out to change that. Weighing teaching more heavily in tenure decisions, they claim, promotes better learning experiences for students, improving the odds they’ll stick to science, technology, engineering, and math, or STEM. As it stands, more than 40 percent of college freshmen who declare a STEM-related major switch to a non-STEM major by the time they graduate. “As a nation, we can’t afford to lose anybody,” says Darryll Pines, dean of the A. James Clark School of Engineering at the University of Maryland, citing the dearth of engineers in certain fields “Enrollment has gone up, so the final part simply becomes that we need to do a better job of retaining and graduating.”

Indeed, everyone stands to benefit from stronger science education as we become a more technologically advanced society, argues Tobin Smith, vice president for policy at the Association of American Universities (AAU), an organization representing North America’s top research schools. “The way we’ve taught science in the past has been oriented toward keeping the most talented students in those fields and leaving out those students who aren’t talented. It’s no longer acceptable for a faculty member to say, ‘Look to your right and left. Only one of you is going to remain.’ That’s an excuse for poor teaching, and not having to teach everyone.”

Concern about undergraduate teaching isn’t new. A group created by the Carnegie Foundation for the Advancement of Teaching – the Boyer Commission – concluded in 1998 that undergraduates at research universities were getting, “in all too many cases, less than their money’s worth.” A “culture of teaching” was needed in departments, it said, and excellent teachers should be rewarded with permanent salary increases, not one-time awards. But change has been slow. “Right now the reward system is largely skewed toward research,” says AAU’s Smith. “A lot of lip service is paid to teaching.”

In recent years, a number of schools have sought to elevate teaching of first-year engineering students. They include Purdue, Clemson, and Utah State universities and Virginia Tech, where separate engineering education departments foster a student-centered approach to learning. These programs have introduced pedagogy to a field in which the majority of Ph.D’s typically teach their first class having had little or no training in instructional theory.

While these efforts are focused largely on the instruction of freshmen, some schools prioritize teaching at all levels. From its inception, Rose-Hulman Institute of Technology’s (RHIT) mission has been to teach undergraduates as opposed to pursuing research. The school, which offers master’s degrees but not Ph.D’s, does encourage professional development among faculty through research or working in industry, but, says Phil Cornwell, RHIT’s vice president for academic affairs, “Teaching has always been the number one criterion for tenure.”

That philosophy is a big selling point for students – the retention rate from freshman to sophomore year is 91 percent – and has lured several tenured professors from other schools who are tired of the continual pursuit of research dollars. “Some schools get addicted to that money,” says Cornwell. “We aren’t dependent on research money. We depend on tuition and our endowment.”

Revenue aside, one reason research is emphasized in tenure decisions is that it’s simply more quantifiable. “It’s often easier for people to be recognized for research contributions than for teaching,” acknowledges Tom Katsouleas, dean of Duke University’s Pratt School of Engineering. “Typically, teaching isn’t as visible.”

Pressure to change the incentive structure is eased somewhat by the availability of a growing class of non-tenure-track faculty, from adjunct professors to industry veterans, who pick up the slack left by a faculty preoccupation with research. Across all disciplines, only 30 percent of faculty were in the tenure system in 2009, down from 57 percent in 1975. A study of Northwestern University students found evidence that non-tenure-track faculty were better teachers than their tenured colleagues, inducing students to take more classes in a given subject and to perform better in subsequent coursework.

Altering the reward system requires improving how teaching is evaluated, says Michael Loui, professor of electrical and computer engineering at the University of Illinois at Urbana-Champaign and editor of the Journal of Engineering Education. Most schools evaluate teaching based on student ratings, which, much as faculty love to deride them, have been shown in numerous studies to be reliable and valid. Unfortunately, student ratings are often the only source of teaching evaluation, Loui says. “We shouldn’t rely solely on student ratings. Like anything else, we should use multiple data to make decisions.”

Loui espouses a more comprehensive assessment involving peer review and teaching portfolios, which may include a course syllabus, an exam, a copy of students’ work with instructor’s feedback, and an essay that details the thinking behind the course design. “If institutions had robust methods for peer review of teaching” and used teaching portfolios to document teaching activities the way publications document research activities, “then they might evaluate teaching more rigorously in promotion decisions.”

At RHIT, faculty are evaluated primarily on student ratings, but peer observers also play a role. For instance, when professors come up for tenure, an instructor who teaches a class following theirs in the curriculum may submit a letter indicating how well the students were prepared. Such a letter can go a long way in explaining poor student ratings, says Cornwell, who adds that the school continues to look for better ways to evaluate teachers.

But placing a greater emphasis on teaching as a criterion for tenure is a tall order at most schools, particularly research universities, says Loui. “It requires rethinking of teaching as a professional and scholarly activity. It’s a culture change, and that’s hard.”

Nonetheless, some schools have made inroads. All tenure candidates at the University of Kentucky, for instance, must submit teaching portfolios. And at Duke University, professors are prohibited from buying out of their teaching responsibilities — a common practice in which a professor can forgo classroom duties altogether to focus on research grants. “It’s something we’re particularly proud of,” says Katsouleas. “We see it as our brand and what we sell to students. Everyone in the school teaches, even the dean.”

The teaching culture extends to Pratt’s Ph.D. Plus program, in which Ph.D. candidates on an academic track are steeped in pedagogy. Katsouleas sees these grads as the vanguard of a movement to grant teaching greater importance. “My hope is that that is the group who can change the world in terms of connecting research and teaching.”

The University of Maryland has also made strides in recognizing the value of teaching with its Keystone program. Administrators launched the initiative in 2006 as part of an effort to bolster the freshman retention rate in engineering. The distinction recognizes 18 to 22 instructors – about 10 percent of the faculty – who excel in teaching fundamental first- and second-year courses. To qualify, teachers must receive high student ratings and be nominated by their department chair. Keystone professors receive a 2.5 percent increase in base salary, up to $5,000 to improve their course curriculum, and access to teaching assistants and fellows for three years (renewable for another three-year period). They also participate in twice-yearly retreats to discuss best teaching practices.

Thanks in part to the program, graduation rates have nearly tripled, says Pines, and today administrators are considering expanding it to faculty who teach third-year courses. “Back in 1990, less than 25 percent who came into engineering graduated. Now that number is almost 70 percent,” he says. “Twenty years ago if you did excellent scholarship and research but were below average in your teaching, you could probably get tenure here at Maryland. That’s totally changed.”

In 2011, AAU launched a five-year initiative to improve undergraduate STEM teaching by encouraging departments to adopt evidence-based teaching practices and providing faculty with the training and support necessary to do so. The move was prompted in part by the results of a survey of AAU members asking what they did to retain students (excluding undergraduate research). The answers were telling, says Smith, who is heading up the initiative. “The results didn’t have much to do with teaching. Most were residential programs, or bridge programs outside of the class. There wasn’t a whole lot of [effort] supporting faculty. That caught our attention.”

Smith says the initiative has a growing body of research to draw on since the Boyer Report. “We think that the time is right, that we can actually have an impact.” But it’s not just about what works, he says. “The other component is providing the scaffolding or support of teaching faculty to implement these changes. Then there’s the incentives and reward structure.”

Last summer, AAU selected eight project sites for the initiative, each of which will have a different focus. For instance, the University of Pennsylvania will combine online learning with in-class student engagement to create so-called blended introductory courses in math, chemistry, physics, and engineering. And Michigan State University is planning a new cross-disciplinary “gateway” STEM curriculum for freshmen and sophomores.

Changing the culture isn’t going to be easy, says Smith, but “we have no reason not to try. We have to admit that we’re part of the problem and no longer blame K through 12, especially when we have dropout rates of 40 percent. We can be part of the solution.”

Margaret Loftus is a freelance writer based in Charleston, S.C.