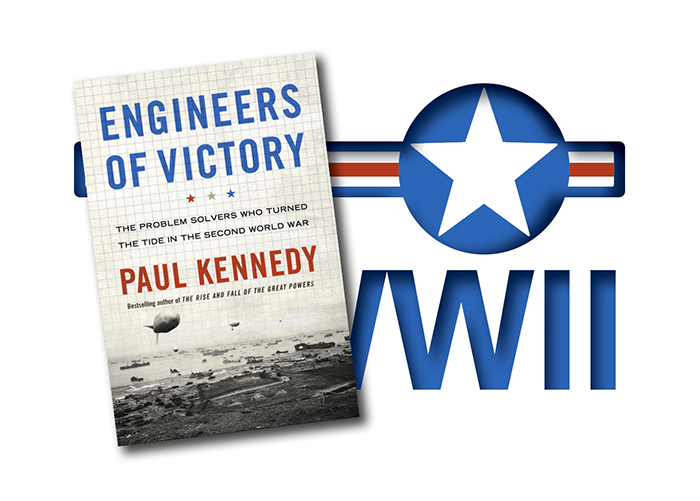 A historian probes the technological advances that ensured Allied success.

Engineers of Victory: The Problem Solvers Who Turned the Tide in the Second World War
By Paul Kennedy
Random House 2013, 436 pages

History is written by the victors, the old saying goes – and such tales typically celebrate the heroics of a few great men. Yet as scholars such as Yale University’s Paul Kennedy probe the deeper complexities of military strategy, more nuanced perspectives of the past are emerging. Invoking a passage from Bertolt Brecht at the outset of his new book, Kennedy reminds us that neither Alexander nor Caesar accomplished their feats without help from those who were neither commanders nor foot soldiers. In Engineers of Victory, this prolific British historian explores the largely untold story of “middle managers” who designed and deployed systems that enabled the Allied triumphs of the Second World War. “We have rarely if ever stepped back and understood how [this work] surfaced, was cultivated, and then was connected to the problems at hand,” he writes.

Kennedy’s is a study of determined, rapid response to often seemingly insurmountable wartime challenges. It also champions technological ingenuity, and through it, even those familiar with the European and Pacific campaigns may gain new understandings of the advances made with radar, tanks, bombs, and long-range aircraft. The author declares that “it is difficult to imagine a military victory without engineers.”

The book’s five chapters divide neatly into consideration of separate but connected challenges overcome between early 1943 and the summer of 1944, a 17-month period that Kennedy believes marked the turning point of the war: convoy safety in the Atlantic, command of the air, defeat of blitzkrieg tactics, seizure of Normandy, and operations in the vast Pacific theater. Each topic focuses on innovative action that eventually destroyed the daunting military strength of the Axis powers. By the time the atomic bombs crippled Japan, the stage had already been set for its defeat, the author believes.

The account opens with the attacks of German U-boats, which by March 1943 had sunk hundreds of merchant ships, strangling European oil and food supplies. For the Allies, these exigencies of total war contributed to “a staggering increase in the number of new ways of detecting an enemy and of deploying new weapons to kill him.” The conflict was, “more than any other battle for the seas, a scientists’ war,” Kennedy notes. Dismissing what he suggests has been an overemphasis on the role of code-breakers in the Battle of the Atlantic, the author instead credits the weaponry involved – long-range aerial bombers; centimetric radar developed first at Birmingham University, then refined at Bell Labs and MIT; the Hedgehog grenade launcher; and searchlights designed specifically for patrol aircraft. Similar stories of effective design, production, and application fill the subsequent chapters, with a nod to corresponding Axis achievements.

Strong acknowledgment is given to the dedicated problem-solvers behind these inventions, such as British pilot Humphrey de Verd Leigh, who designed, tested, and advocated for the aerial searchlights that made such a difference in U-boat detection, despite Air Ministry reluctance to approve their use. On the American side, Maj. Gen. Percy Hobart modified the basic Sherman tank with such astonishing variations – giant metal chains, amphibious skirts, bulldozer blades, flamethrowers, and portable bridges – that his armored creations became affectionately known as “Hobart’s Funnies.” And it was Roosevelt’s chief civil engineer of the Navy, Ben Moreell, who convinced his boss of the need to establish a Civil Engineer Corps for the war effort. By the time peace was declared, Moreell’s Seabees had constructed some $10 billion worth of infrastructure, including pontoons, harbors, piers, reconstructed ports, and landing craft; in the Pacific, they were responsible for 111 airstrips, 441 piers, gasoline storage tanks, housing, and hospitals, often built under duress.

These are just a few of the profiles included in this study of “the mechanics and dynamics of strategic success and failure.” Some readers may find the blow-by-blow coverage of specific engagements exhausting, but it will certainly engage those interested in military engineering. And as Kennedy argues, there are lessons to be gained about the need to encourage a culture of innovation in time of war, as well as peace.