Breakthroughs and trends in the world of technology. 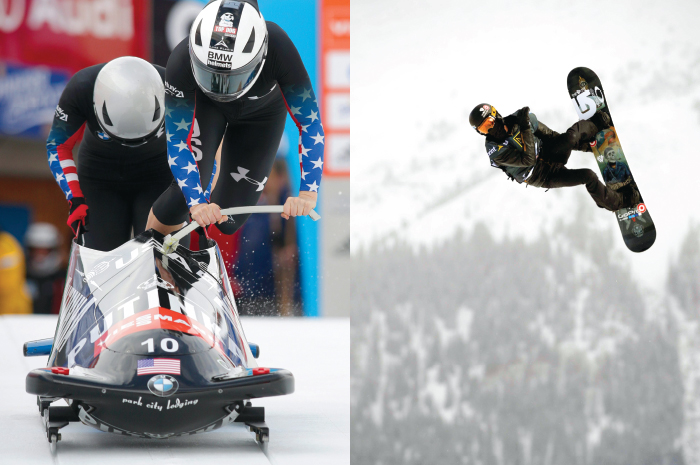 Olympic champions make the impossible look possible. But engineering often provides their winning edge. Consider the half-pipe on which legendary snowboarder Shaun White (photo, above right) has twice clinched gold medals for his gravity-defying aerobatics, including his 2010 signature Double McTwist 1260, flipping twice while rotating 3.5 times. For the games this month in Sochi, Russia, engineers have constructed a 557-foot-long monster with a 65-foot radius and 22-foot walls – nearly twice as high as the half-pipe at snowboarding’s Olympic debut in 1998. As a video by the National Science Foundation and NBC Learn explains, the increased width and height allow athletes to accelerate faster and stay airborne longer without increasing the forces on their bodies. White, who is featured in the video, plans to unveil a new trick at Sochi: Nailing a frontside double cork 1440 in the qualifiers secured his berth at Sochi. Meanwhile, U.S. bobsledders hope engineering will propel them to victory in the two-person race for the first time since 1936. BMW engineers have spent nearly three years applying Formula One racecar technology to redesign Team USA’s 20-year-old sliders. The new “ultimate driving machines” have a different center of gravity, narrower nose, and lighter, more aerodynamic hull made from carbon fiber and synthetic laminate rather than fiberglass, making the ride less jarring. Engineers also scanned the bodies of two Team USA bobsledders to make precision mannequins for wind-tunnel testing and to tailor the steering ergonomics. The new sleds zipped driver Steven Holcomb and pusher Steve Langton to victory at December’s World Cup. But it’s the athletes – some are Olympic sprinters, others have won bobsledding gold – who remain the biggest engineers of success at Sochi. — Mary Lord 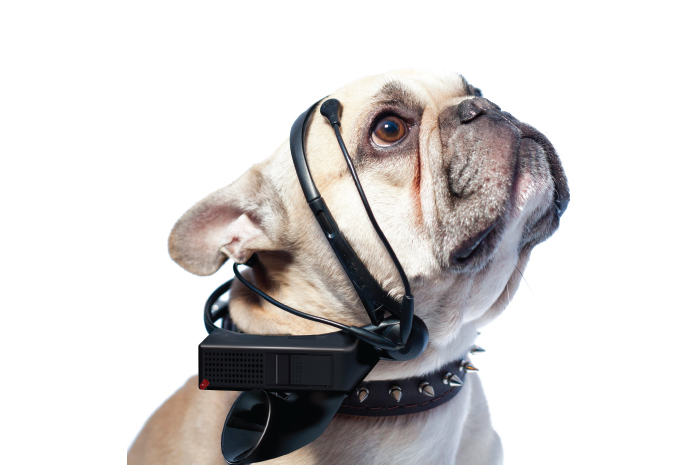 Ever wonder what Fido is thinking? Dog owners could find out in April, if No More Woof, a device developed by the Nordic Society for Invention and Discovery, performs as billed. The Finnish/Swedish start-up says its headset can read and then broadcast basic canine thoughts in English. (Other languages are in the works.) The device features an electroencephalogram and software to interpret those doggie brainwaves using a Raspberry Pi computer. Financed with $15,000 raised on the crowdfunding site Indiegogo, No More Woof comes in three models. The $65 basic version will be able to translate two or three dog thoughts, while the $1,200 “superior” version includes an algorithm that allows it to “learn” and expand its repertoire. And just what is on a dog’s mind? Thoughts like “I’m tired,” “I’m excited,” and “I need to pee.” Dogs already convey those messages pretty well, however. Barking up the wrong tree? — Thomas K. Grose 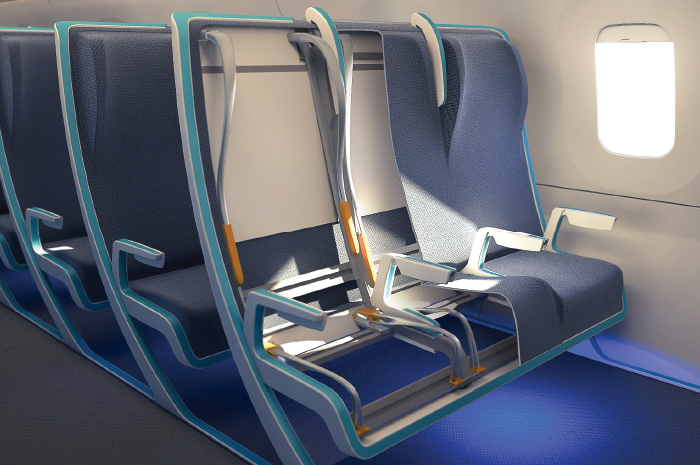 Next time you board a plane, check out your fellow economy-class passengers. All shapes and sizes, right? Not so their budget-section seats. Famed British design company Seymourpowell has flown to the rescue with a concept airline seat that would give passengers more control over space and comfort. The Morph replaces conventional seat pads with fabric stretched around an ergonomic frame: one sheet for the seat, another for the chair back. Armrests and upper dividers serve as fabric clamps to create three hammock-like seats with adjustable backs. The solid back doesn’t move, however, so reclining passengers won’t squeeze those sitting behind them. Cabin crews can reset seat widths between flights to suit the next group of passengers. Smaller adults or children who need less space could either buy cheaper tickets, or sell or trade space to fellow passengers who need more room. While welcome, this effort to make economy seats more comfortable won’t change the fact that airlines have added more rows of seats to already cramped cabins. So forget extra legroom. — TG 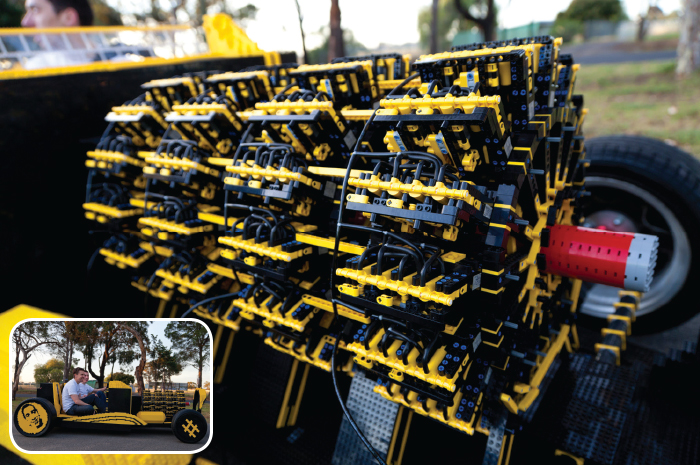 A most unique vehicle cruised the streets of Melbourne, Australia, back in December. Fashioned entirely from more than 500,000 plastic bricks, the world’s first full-size Lego car tooled along at 12 mph on compressed air released from two tanks into a pneumatic engine. It was built at a cost of more than $60,000 (a third of which came from crowdfunding) by entrepreneur Steve Sammartino and his protégé, Raul Oaida, a 20-year-old Romanian whom Sammartino calls a self-taught technology genius. Their proof-of-concept car might go on display or be auctioned. But don’t expect to see fleets of air cars anytime soon. As Sammartino told the BBC: “I’ve been up to my neck in Lego for four weeks, and my fingers are still sore, so I’m not keen on building another one at the moment.” — TG 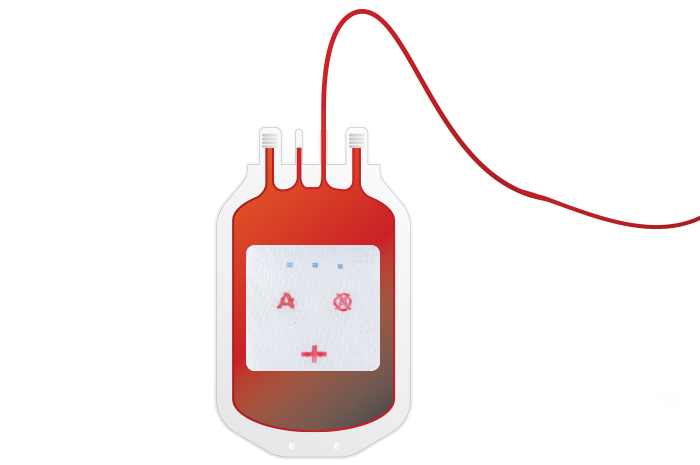 In the film adaptation of J. K. Rowling’s novel Harry Potter and the Chamber of Secrets, the hero scribbles in another character’s diary, “Do you know anything about the Chamber of Secrets?” The answer appears on the page: “Yes.” Watching the movie, Wei Shen got an idea for solving a problem that emergency medical practitioners often encounter when responding to disasters in poor countries: confusion about or mistakes in identifying patients’ blood types. Shen, a chemical engineering professor at Australia’s Monash University, came up with a paper-based sensor. Medical personnel drip blood onto towel-like sheets of paper, different sections of which are impregnated with antibodies that will respond to blood types A, B, AB, or O, and Rh factor positive or negative. The antibodies interact with antigens in the blood. Coagulation occurs when the antibodies correspond to the blood type. When the sensor is rinsed, the coagulated blood remains, ABC Australia reports, “spelling out the answer — literally — in blood.” Shen has spent a year perfecting the method, which the university says has drawn the interest of defense forces and emergency services in the developing world. — Chris Pritchard Algae have long been considered a potential prime source for biofuels. They’re cheap to grow and require no arable land. But current conversion methods are costly. Most require drying the algae first, which is energy intensive. Now researchers at the Department of Energy’s Pacific Northwest National Laboratory have come up with a new chemical process that can convert a slurry of wet algae to biocrude in less than an hour. The resulting product then can be refined into gasoline, aviation fuel, or diesel. Other researchers also have converted wet algae into fuel, but only one batch at a time. PNNL’s process, which uses hydrothermal liquefaction and catalytic hydrothermal gasification to essentially subject the algae to very hot water under high pressure, should make large commercial operation possible. In addition to biocrude, the process produces nutrients and water that can be recycled to grow more algae. Moreover, fuel gas extracted from the waste water during recycling can be burned to produce electricity or converted into natural gas. Genifuel Corp. of Utah has licensed the technology with the aim of building a pilot plant. The company’s president calls the process a “huge step” in the effort to produce cost-competitive biofuels. — TG 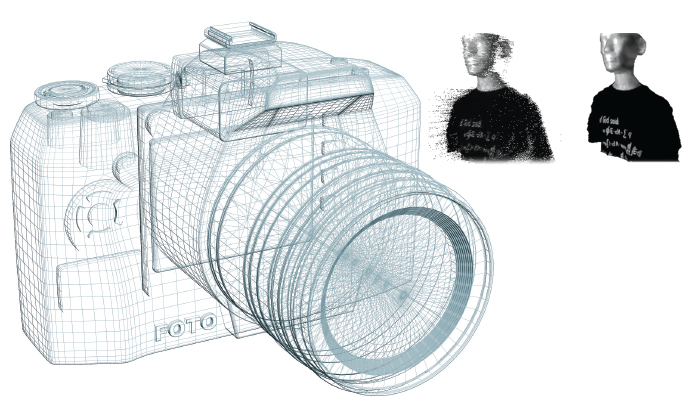 Lidar range finders, a key technology for controlling autonomous vehicles, shoot short blasts of laser light and then measure how long it takes for reflected photons to return. Now an MIT electrical and computer science graduate student has developed a system that can gauge depth after detecting a single photon per location, compared with at least 100 photons required by conventional lidar. Ahmed Kirmani’s device redeploys the same hardware to better match the physics of low-light imaging. After firing a single photon, it waits to detect the reflection before focusing on the next location, filtering out false signals from ambient light using a statistical method. In addition to improving the response times of self-driving cars, Kirmani’s lidar system might be used to enhance night-vision devices used by the military or take high-quality photos in very dim light. — TG 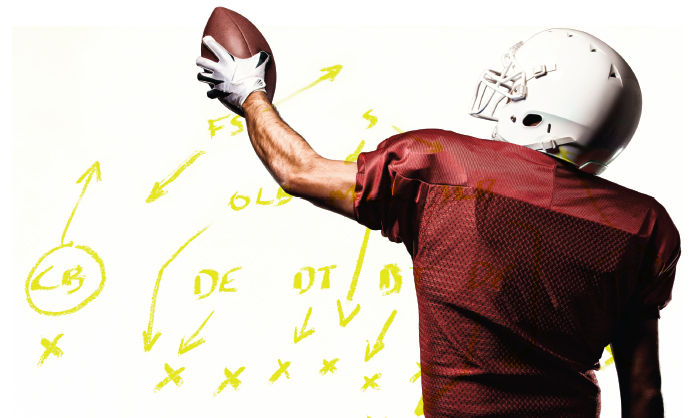 Bigger, stronger, and faster players could mean more concussions in the National Football League, some observers fear. Iman Ebrahimi, a postdoctoral fellow at Simon Fraser University in Surrey, British Columbia, is hoping to change that trend with an “impact-diverting patch” that he and his team at SFU’s Mechatronic Systems Engineering School have developed. The 1/16-inch-thick patch attaches to a football helmet like a decal and is placed in areas that are prone to the most impact. The “grippy” outer layer sticks to the field when a helmet is slammed into it, while the inner layer stretches slightly, reducing the tangential force that can cause a helmet to rotate swiftly more than 100 degrees after impact. Ebrahimi’s patch reduces that rotation by more than 50 percent, minimizing the brain-shaking impact inside the skull that is so destructive to neurons and one of the major causes of concussion in players. Ebrahimi and his team have a patent pending on the patch and expect to bring it to market in 2014 for less than $50. — Pierre Home-Douglas 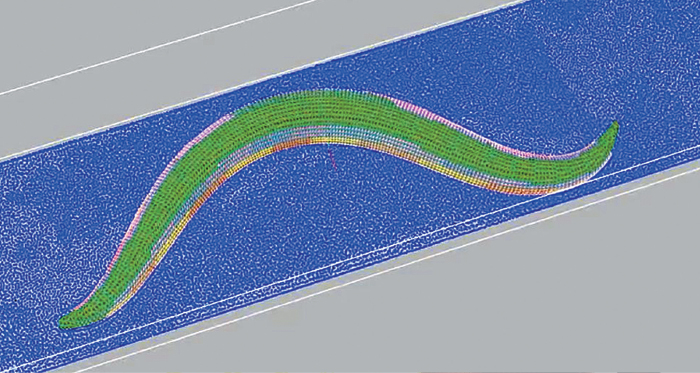 Caenorhabditis elegans is a tiny nematode with just 1,000 cells. But this simple roundworm punches above its weight in science. One of the world’s most studied creatures, it was the first multicelled animal to have its entire genome mapped. So last May, when scientists and engineers from around the world began a project called OpenWorm, “dedicated to creating the world’s first virtual organism in a computer,” they picked C. elegans as their subject. Progress has been swift, with a breakthrough in December that added the code to make the virtual worm wriggle like a real one. The next goal is to model how the nematode’s nerve fibers fire muscle segments to twitch and propel it forward. Why bother creating a computer model of a worm? Understanding how its tiny brain works is a small step toward unraveling the complexities of a human brain. — TG 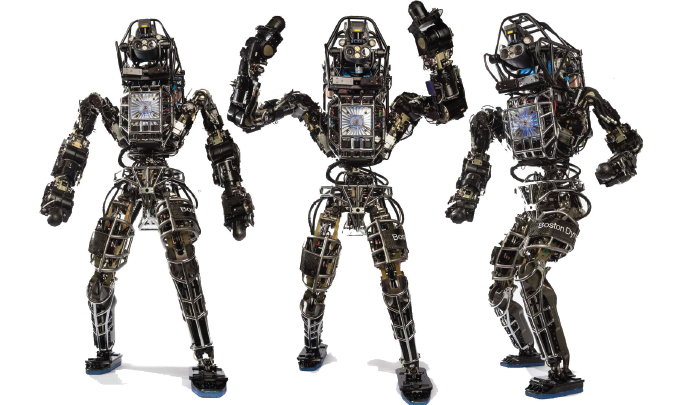 Robots have proved useful in disaster-relief efforts for decades, but they couldn’t perform many of the chores most needed following the 2011 Fukushima Daiichi nuclear plant meltdown. The latest DARPA Robotics Challenge seeks to improve their performance. Eight teams made it through December’s preliminary trials, where 16 robots drove vehicles through an obstacle course, climbed ladders, connected a fire hose, and did other disaster-relief tasks in a rubble-filled environment. Each team received $1 million to prepare for the finals late this year. Schaft, a team spun out from the University of Tokyo and recently acquired by Google, finished first, winning 27 of a possible 32 points. The Florida Institute for Human and Machine Cognition (IHMC)’s robot came in second, with teams from Carnegie Mellon University and MIT placing third and fourth, respectively. The MIT and IHMC teams both programmed a 6-foot, 2-inch, 350-pound humanoid machine called Atlas, built for DARPA by Boston Dynamics (another Google acquisition). DARPA’s grand challenges have helped spur technological breakthroughs. The agency’s original 2004 and 2005 contests, for example, kick-started the now-burgeoning field of autonomous cars. — TG 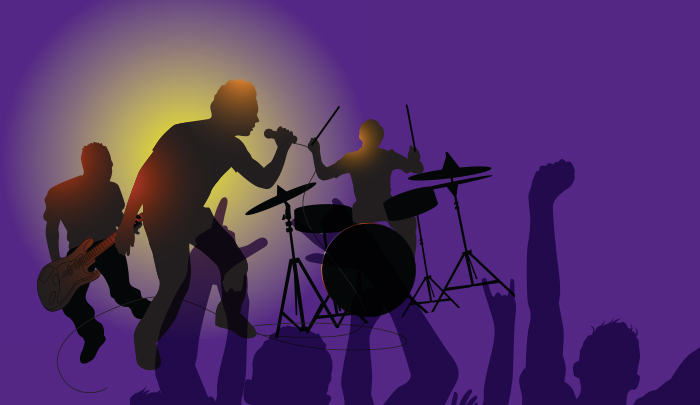 Solar-power production is typically quiet, but it may be time to crank up the volume. New research shows that sound waves can make photovoltaic cells more efficient. Piezoelectric materials create voltage when pressure, or strain, is applied. So researchers at Imperial College and Queen Mary University, London, added a piezoelectric material – zinc oxide nanorods – to solar cells and then subjected them to sound waves. Some frequencies greatly amplified output, suggesting that solar cells could be made more efficient by taking advantage of ambient noises, such as the roar of roadside traffic. Possible practical uses might include powering electrical components on buses, trains, and other vehicles, or air conditioning units. What really sent the solar cells into overdrive, however, was music – especially the high-pitched sounds of pop and rock, which boosted energy output by up to 40 percent. By contrast, classical music’s lower pitches barely raised effectiveness. Obvious choices for the solar-power playlist: AC/DC and Electric Light Orchestra. — TG