Year of Action on Diversity

What Works? A Culture Change

A clear-eyed look at four diversity strategies shows there can be no shortcuts.

ASEE’s Year of Action on Diversity is meant to spur us all into conversations and actions that will improve the inclusion of groups underrepresented in engineering. Most of us want to do the right thing, want to support and encourage all people’s inclusion and success in engineering, but many of us struggle with knowing what actions we personally can take that will contribute positively to diversity. An innovative framework developed at the Simmons School of Management for promoting equity in organizations can help guide our thinking about ways to achieve equitable, inclusive learning environments. Applying these strategies to the classroom allows us consider classroom policies, behavior, and requirements in a place where we most often interact with students. However, each has drawbacks, as is explained below. In the end, only a strategy aimed at changing the culture is likely to succeed.

Equip the Underrepresented Group – This strategy assumes a deficiency in certain knowledge, experiences, or skills needed to take advantage of opportunities. It prompts us to think about what supplementary training and experiences can be put in place to help an underrepresented group be more successful. In the classroom, for example, we may assume that all women need additional skills in spatial visualization, or that no women know how to use the equipment in the machine shop, and so create interventions and experiences to supplement the deficiency. These experiences can help individuals from the underrepresented group be successful, but if they are offered only to those students, they can carry a stigma. Most troubling is the perception that if an individual does not succeed after participation in these interventions, it is his or her fault. However, there are times when these types of strategies are needed, particularly in situations where we are not able to change the culture that favors the majority population for success.

Create Equal Opportunities – The assumption here is that differences in group achievements or outcomes can be explained by discrimination or biases that result in unequal opportunities. To compensate, we try to “create equal opportunities.” For example, we know that when students are working on teams, sometimes the women end up in support roles, such as organizing or note-taking, and don’t always get a chance to contribute to team leadership or technical project development. So we put into place a policy that team roles need to rotate or that there must be two women assigned to a team, or we purposefully put women into leadership roles. There are times that these types of strategies are needed to ensure greater equity, because we know that biases do exist. But they can create resentment, from both the majority and underrepresented groups. They are, in essence, a Band-Aid.

Celebrate Differences – In the classroom, we might make a special point of talking about the contributions of those from underrepresented groups to the field or what they can bring to a team environment; such as, for women, better collaboration and teaming skills. This approach does help promote understanding and illustrates the added value provided by underrepresented groups, but it also assumes that everyone in a particular group shares the same experiences and strengths. Thus, it reinforces the very stereotypes that have exacerbated the group’s exclusion.

Change the Culture – Guided by a belief that all students in a classroom can succeed, we set up an environment that facilitates students’ learning in a way that promotes universal success. We might, for instance, emphasize the socio-cultural aspects of the course material, to stress thriving instead of merely surviving. This approach will almost certainly drive our teaching pedagogies to be more learner-centered, using and relying on teamwork, collaboration, active learning, and inclusive examples to ensure that each student connects to and masters the material. Difference, from this perspective, is seen as valuable and necessary in making us all better. Results show that this approach is the only one that has a hope of making significant, sustainable change. The drawback? It’s hard work, very hard work. But when have engineers ever backed away from a challenge? Let’s all work together to make this type of change happen, so that all of our students, regardless of their areas of difference, can be successful.

Elizabeth Holloway is assistant dean of engineering for undergraduate education and director of the Women in Engineering Program at Purdue University. 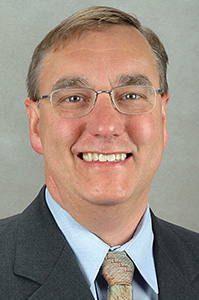 If someone had asked Randy Moses about career aspirations as a high school sophomore, he might have said he wanted to study coral in the Florida Keys. To a kid born and raised on Air Force

bases around the world, including five years scuba diving as a teen on remote Midway Island, marine biology beckoned.

But looking back, Moses sees “small things that add up” to his eventually becoming a professor of electrical and computer engineering and associate dean for research at Ohio State University’s College of Engineering. He spent hours on the floor with his Erector set as a kid – “I suspect some of the screws and nuts are still in the rug!” he laughs – and vividly recalls the first moments watching the Heath kit color TV he and his dad had assembled. “There was a brilliant, huge, color picture,” says Moses. “I remember being amazed that all these little parts came together to make that picture and sound and plucked that signal from out of the air.”

Good at math and science, Moses took chemistry and physics as a college freshman. Students at the time used an analog computer to solve differential equations. Hooked up to capacitors and resistors, it used electrical circuits to emulate physical processes, such as how shock absorbers work. The professor asked Moses to “play with these things” and create some self-study labs. Reading up on analog computers, he realized the underlying math was the same as signal processing, so he decided to pursue electrical engineering at Virginia Tech.

A life in academe evolved almost by accident. Moses found during four job interviews that industry required a master’s degree to do the kind of signal-processing work he’d enjoyed as an undergraduate. That led to a doctorate – and discovering a talent and zest for teaching. He decided to “try an academic career for a couple of years.”

Moses’s current research focus involves creating 3-D radar images from small amounts of data, which could transform medical imaging and electron microscopy along with defense technologies. As chair of ASEE’s Engineering Research Council, he sees America’s need for engineers growing even as the environment for research funding becomes more challenging. Helping faculty members build research programs is a prime goal. “We get to take the idea of teaching to the next level,” says Moses, an IEEE senior member and DARPA award winner. “Universities are the nation’s primary force in creating new knowledge, and I see graduate students as training researchers to be the innovators of the future.” 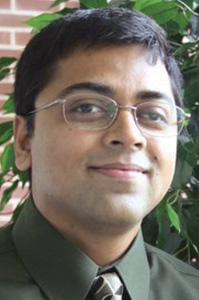 Amlan Banerjee is a senior research associate in our Assessment, Evaluation, and Institutional Research office and one of the many expats who make ASEE headquarters a dynamic, diverse work environment.

A former practicing engineer, Amlan was born in bustling Calcutta, a city he’s proud to note has made rich contributions to India’s cultural and intellectual history. He moved to Mumbai for graduate work at the Indian Institute of Technology, where he met a visiting professor from the University of South Florida, who urged him to try his hand in the United States. Amlan took the advice and earned a Ph.D. in civil engineering from USF.

“The first shock,” he notes about moving to a city the size of an average Indian suburb, “was coming to Tampa and not seeing many people in the street. People just don’t walk there!” The city’s large Indian community and hot, humid climate helped ease his transition, however, and after his Ph.D. he and his wife, Nivedita, moved to Boston where he worked for a consulting firm. By 2010, he says, “I wanted to make a transition to computational social science, which is why I sought work in D.C.” After a stint at the Hudson Institute and later at Georgetown’s School of Foreign Service, he came to ASEE in 2014. His focus has been STEM education, the high-skilled labor market, and international migration.

One cultural particularity brings a smile to his face, making this mild-mannered guy appear to be a troublemaker. Prior to getting married, he and Nivedita – “a hard-core civil engineer” with a focus in geotechnical engineering – dated without her parents’ consent. In fact, her parents were already looking for a groom for her. One day, Amlan recounts, “we were walking down the sidewalk. It was very dark, and suddenly we saw her mom coming the other way . . . and things got exposed.” Adjusting to modern sentiment, her parents ultimately approved of the relationship.

The couple spend most of their time today caring for twins Aishik and Aishani, born in 2012. In his spare moments, Amlan likes to cook, his specialty being rasmalai, a type of custard with cheese balls that is topped with slivers of nuts. Weekends find the family at various parks, including the regionally renowned Clemyjontri playground.

At ASEE, he says, “I have a lot of flexibility afforded to me by [office director] Brian Yoder to apply my skills and to approach projects creatively. That can be hard to find in many organizations. I like that I own my projects and can do things in my way with my ideas. Also, I’m active with our current HR-driven ‘employee involvement initiative’ and am eager to make a contribution to improve ASEE however I can.”

And ASEE is happy to have his skills. One could say it’s a marriage that anyone would approve of.