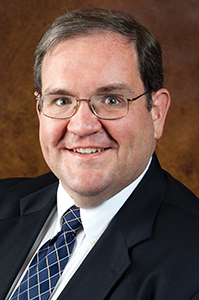 Growing up in southern Illinois, Doug Tougaw always knew that he was going to be an educator like his parents. His father was a high school math teacher turned superintendent and then education professor, and his mother was a dietitian who helped educate diabetics about nutrition. “Even when I was a kid, my sister and I would always play ‘teacher’ instead of ‘firefighter’ or something like that,” he says. “It was not a question of whether I would be a teacher, but what subject.”

Today, as department chair and professor of electrical engineering at Valparaiso University, Tougaw conducts research at the nanoscale level, using computer simulations to help predict how quantum devices will behave once they are constructed. “I love Valparaiso, but it is a strictly undergraduate school, so we can’t afford a $10 million semiconductor fabrication facility, so I’m very happy that I tend to focus on the simulation side—that can be done with a desktop computer,” he says.

Tougaw loves following his students’ careers, watching them go from a just-out-of-high-school novice to a full-fledged professional engineer over the course of their studies. “Seeing the progression in their abilities and their confidence and their maturity—that’s by far the most rewarding part of my job,” he says. To keep his advanced students engaged while bolstering those who struggle, he has provided “a lot of additional resources that students can choose to take or leave.” That includes personally making more than 200 videos of his work that students can access to help solve problems. “If the student is willing to work hard, I can work with that student,” he says.

At ASEE, Tougaw relishes networking with his fellow engineering educators who grapple with the same problems he faces. He has held many different leadership positions over the years, rising from the regional level to his current position as Vice President, Finance. In that role, he represents the membership to headquarters and presents finances to the rest of the organization and to the Board of Directors.

The ASEE Nominating Committee, chaired by Most Immediate Past President Louis Martin-Vega, requests member participation in nominating board officers for the 2019 ASEE elections. Officers to be nominated for Society-wide Board positions are: President-Elect; Vice President, Finance; Vice President, External Relations; and Chairs of Professional Interest Councils I, IV, and V.

If you have any questions, please contact ASEE Assistant Board Secretary Christian Evangelista at (202) 350-3516 or c.evangelista@asee.org.