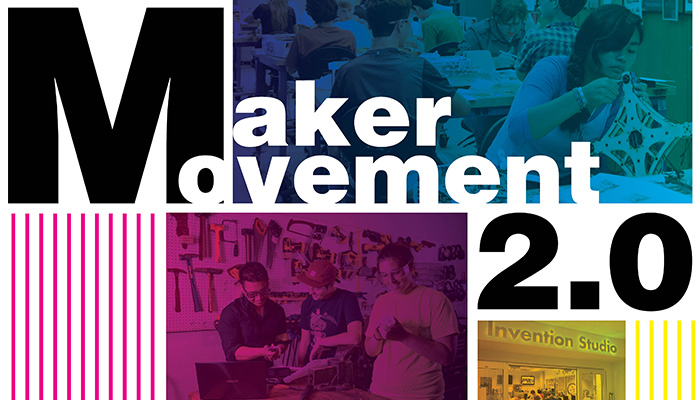 Walking into a maker faire can be a dizzying experience. Robots! Quadcopters! 3-D Printers! And crowds. Now more than a decade old, with 185 faires in 35 countries and White House backing, the Maker Movement is nearly inescapable. While New York’s World Maker Faire draws 95,000 visitors and more than 950 exhibitors, community-based maker spaces are cropping up in schools, libraries, naval bases, independent workshops, and mobile labs in vans—even one pulled on the back of a bike. They range from the extremely high-tech with laser etching devices and 3-D scanners to the positively analog with hammers, nails, and sewing machines, and everything in between.

Almost as dizzying is the challenge for educators. With engineering schools across the country outfitting maker spaces, instructors are trying to channel the open-ended DIY movement into a higher-level graded curriculum that accreditors will accept. Such academic maker spaces are the subject of an international symposium in November in Cambridge, Mass., hosted by MIT.

Finding ways to conform with ABET outcomes is essential to any successful integration of making with formal engineering education. Luckily, makers learn many skills that fit with the current and proposed ABET criteria. In a study presented at the 2016 ASEE annual conference, Shawn Jordan, an assistant professor at Arizona State Polytechnic, found that the movement addresses many of the existing and proposed new outcomes, including learning how to communicate technical details to a wider audience; techniques to foster lifelong learning; learning how to apply engineering knowledge to solve problems; specific skills applicable to electrical engineering and manufacturing engineering programs; experience on multidisciplinary teams; and designing systems with realistic constraints.

Further, Jordan found, “most makers are highly adept at finding out how to solve problems…..If makers were imagined as employees in a technology firm rather than hobbyists, this ability to solve problems outside the baseline knowledge acquired in university would be strongly valued.”

Lack of higher math skills, however, is the biggest weakness in the Maker Movement, according to Jordan. Out of 76 makers interviewed in his study, “only one respondent mentioned using calculus and polar coordinates as a skill learned for their project.” Programs will need to emphasize explicit mathematical elements during project creation or evaluation, he concludes.
“Our students definitely think it’s more fun to tinker than it is to do the [math] equations,” says Julie Linsey, an associate professor of mechanical engineering at the Georgia Institute of Technology, whose iDREEM lab focuses on innovation and engineering education. “But students need to know when to trade off one versus the other.”

Linsey’s lab collects information on the Invention Studio, a 3,000-square-foot maker space open to all of Georgia Tech’s student population—not just engineering students. It’s at the center of a four-year, National Science Foundation-funded longitudinal study Linsey began in 2014. “We’re tracking students from the time they are freshman all the way to when they are seniors and tracking their engagement,” Linsey says. She hopes that they will soon be able to provide quantifiable proof that integrating making into the curriculum will provide positive educational outcomes.
“It’s important that academic institutions nurture creativity and innovation in their students,” Linsey wrote in a paper presented at ASEE’s annual conference on maker spaces, student retention, and student self-efficacy in the engineering design process. It’s still early in the study, but the first-year data are promising. “Right now it’s premature, but we are seeing greater self-efficacy in the students who use the maker space…[but] we can’t show causality yet—the space might just attract students with greater design self-confidence to begin with.”

The Invention Studio was founded in 2009 as a space where mechanical engineering students could work on their capstone design projects in an underutilized mail closet. It has since morphed into a “design-build-play” space for all of the students, faculty, and staff.

In order to create a maker space that will spark students’ interest in independent learning, Linsey emphasizes the importance of student involvement in the creation of a maker space. The Invention Studio is primarily run by student volunteers who help guide other students on safe lab practices. But students should get involved even earlier, she says. “[A maker space] should be designed with students in mind, and if at all possible, with student input.” Universities shouldn’t take an “if you build it, they will come,” attitude; rather, they should see what tools fit student needs. They might want sewing machines and vinyl cutters instead of Computer Numerical Control mills and lathes. “Students are more likely to continue using equipment that they request as opposed to equipment presented to them.”

“These maker spaces do need class projects to bring students into these spaces,” Linsey says. “But it’s critical that they’re given the capability to do their own projects, whether they’re entrepreneurial or projects for fun. [Student-driven projects] are some of the biggest and best ways that we are impacting learning.”

Maker Grants, student-driven learning grants, are unique to the Georgia Tech maker space, Linsey says. They are small amounts of money—usually a couple hundred dollars—that students can use for an entirely extracurricular project. The students came up with this idea to be able to execute self-directed personal learning projects.

“It’s all about intrinsic motivation for learning,” Linsey says. “It gets students to explore things that they cannot explore in the classroom.”

The best projects by far are the senior capstone projects, she says. “One of my favorites was a latrine system for African refugees. They won first prize at Georgia Tech’s InVenture entrepreneurship competition and used the money for an NGO start-up.”

Feeding the Pipeline from K-12

The Maker Mindset—the creative, entrepreneurial, intrinsically motivated way of thinking that characterizes makers—is being cultivated earlier and earlier. In fact, many schools at the K-12 levels are integrating this kind of thinking, hoping that it will drive students into the engineering pipeline. AnnMarie Thomas is one of the educators who is pioneering playful integration of scientific concepts in K-12 settings.

Thomas has been involved with the Maker Movement almost since the beginning. She began in the movement as a writer with Make: magazine, the publication that started it all. She then moved on to help form a nonprofit called the Maker Education Initiative, more commonly known as MakerEd, and is now an associate professor in both the School of Engineering and the Schulze School of Entrepreneurship at the University of St. Thomas. She recently published Making Makers: Kids, Tools, and the Future of Innovation. “The Maker Movement is sort of a grassroots thing,” she says. It’s not easy to pin down exactly what it is and what it does, “which is a little hard for formal education.”

Many people cite the free-form Maker Movement as a great way to get kids into engineering. While it’s true that many who are attracted to making might be a good fit (Jordan’s Arizona State study found that half of the children ages 12-17 who identified themselves as makers were interested in engineering or computer science as a major), Thomas emphasizes that engineering and making are not the same thing, “and we have to be very careful not to conflate the two.”

“You can’t have engineering without analysis,” she says. “Engineering is the intersection between making and breaking, creative problem solving, and math and science. If you take away any of those three pieces, it’s not engineering.” When students can take the creative design process and apply science and analysis, that’s when you can start ushering them into engineering as a profession.

To teach engineering using making at the K-12 level, Thomas advises educators not to get hung up on the final product. Making involves the need to make mistakes and learn how to work around them, even if the final classroom product is not optimal. “Look at the engineering design process and figure out what you’re grading,” she says. “Do you need to care about the final product, or can you let the students go and really care about how they did their analysis, or how they structured their brainstorming?”

This sort of teaching and grading will promote the ability to tinker, play, learn from mistakes, and analyze. An ASEE report, Envisioning the Future of the Maker Movement, says maker spaces will also allow educators “to recognize and develop talents and motivation in students who may not excel in school but have valuable out-of-school skills.”

Students are also learning CAD skills, 3D printing, and other advanced manufacturing skills earlier in life as maker spaces become more prevalent in schools and communities. They will have the knowledge and creativity to enter a skilled job market that people cannot quite imagine today. Many people have high hopes for the movement’s ability to fill the manufacturing industry’s skills gap, creating jobs through entrepreneurship, and advancing city infrastructure by developing an “innovation ecosystem.”

The Maker City Project is a Kauffman Foundation-funded project that has published a handbook outlining how this can happen. “Manufacturing is experiencing a kind of renaissance inside our cities, driven by changes in attitudes towards making and changes in technology that enable small firms to produce high quality, high-value products and take advantage of emerging local and increasingly distributed supply chains,” the handbook says. It points to the rise of multimillion-dollar crowdfunding projects and consumer-driven making sites like Etsy.com as examples of how makers are already having a large impact on the economy. It’s proof that the grassroots have spread and created an ecosystem all their own.