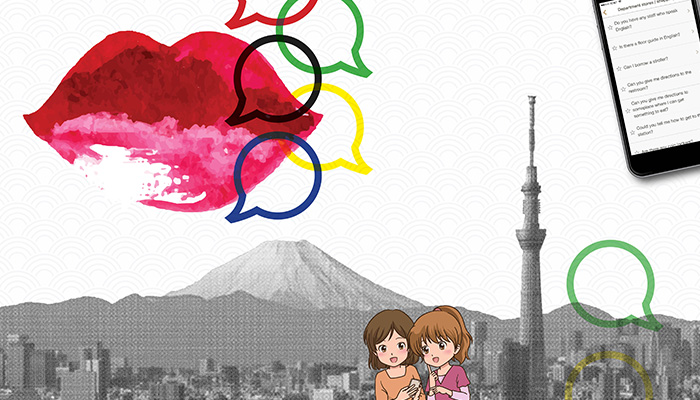 Machine translation technologies are set to change how travelers interact with Japanese locals leading up to the 2020 Tokyo Olympics.

Since Westerners first reached Japan in the 16th century, the language of these remote islands has provoked angst among would-be translators. Frustrated Jesuit missionaries fumed about “the devil’s tongue.” Centuries later, in the 1980s, American business insiders declared that Japanese—with its topsy-turvy grammar and complex writing system—constituted an “unfair” trade advantage.

But where God and trade-bashing failed, computer science and preparation for the 2020 Tokyo Olympics are beginning to succeed, chipping away barriers to one of the world’s most difficult languages. The Japanese government has invested about $11 million in an effort to come up with practical consumer-friendly translation tools—a modest sum by American standards, but Japan’s most significant commitment yet to advancing the state of machine translation (MT).

This figure includes four separate initiatives: A mobile app called VoiceTra by the National Institute of Information and Communications Technology (NICT) will facilitate text and spoken communication between Japanese and dozens of other languages; Panasonic is beta-testing a suite of devices, including a megaphone that will instantly translate safety and crowd-control instructions in noisy environments; Telecom operator NTT DoCoMo offers a translation app called JSpeak specifically for shopping, dining, and communicating with hospitality employees; and Toyohashi University of Technology is developing a template for crowd-editing translation engines, substantially driving down the cost of MT.

Unlike the United States, where innovation in MT is in large part driven by the defense establishment, Japan’s foray into MT is inextricably tied to tourism, one of the rare bright spots in an otherwise stagnant economy. A recent surge of visitors, sparked by a weak yen, rising wealth in China, and eased visa restrictions, has been nothing less than staggering. In 2015, tourism rates soared to nearly 20 million visitors—a 47 percent increase from 2014—four years ahead of schedule. That puts the tourism industry, which until eight years ago didn’t even have its own government agency, on par with pillars of the Japanese economy like auto parts and electronics.

This influx has prompted planners to adjust tourism estimates for the Olympic Games upward. The latest goal is to double the number of foreign visitors to 40 million, with a potential $80 billion payoff.

If bridging the linguistic gap seems long overdue, it hasn’t been for lack of trying. In fact, says Prof. Hitoshi Isahara, director of the information and media center at Toyohashi University of Technology, Japanese translation software dates back to the dawn of modern computing in Japan, in the mid-20th century.

“English has been a huge language barrier for Japanese, so there was a practical need,” explains Isahara, an NICT alumnus with a long career in translation technology. Like many in his field he is not a translator—and like the vast majority of Japanese, he prefers to speak in his native language. For computer researchers, perfecting the algorithms of machine translation is a natural challenge and a kind of utopian holy grail.

“Translation is kind of an ideal application for computers,” said Eiichiro Sumita, director of the Advanced Translation Technology Laboratory at NICT. His business card bears a tiny inscription, “Bridge Language Barrier.” While cracking the foreign language code is a U.S. defense imperative, Japan was so motivated to escape linguistic isolation that it briefly led the world in MT science back in the 1980s.

It’s much easier to produce an efficient and reliable translation system between language cousins such as English and French than for Japanese. For one thing, English and French share the same subject-verb-object grammatical structure. In Japanese, verbs are situated at the end of the sentence.

One way around this is by “prepping” Japanese text in advance—rewriting sentences to ensure each has a subject, breaking up long sentences, and eschewing idiomatic and/or obscure phrases.
A further impediment to MT is not linguistic but cultural. Solid MT systems rely on accumulating a high-quality corpus of text—reams of translated language pairs that, with statistical analysis, select the most frequent (and presumably best) interpretation. Western countries have established a large public corpus because their companies freely share huge quantities of translated manuals and documents. Japanese companies have been loath to do the same, even though doing so would vastly lower translation costs for all. For that reason, Isahara reckons their database is merely a fraction of that accumulated for Western language pairs.

“Acquiring a corpus—and [deciding] which corpus to use—is critical,” he says. For now, the university is working with Microsoft to build a database from original data provided by the tourism departments of Miyazaki, Kanagawa, and other prefectures. “If this works for tourism, we’d like to do the same for autos.”

To perfect their MT model, Isahara’s team experimented with using foreign exchange students at Toyohashi University as volunteer editors to refine the machine-translated text on the college’s website. This crowd-sourced “post-editing,” he contends, yielded translations of near-professional quality at little cost. A similar project has been launched to recruit a crowd-editing team of Japanese rugby fans to create a database in advance of Japan’s 2019 Rugby World Cup. (To try to avert cybermischief, he is calling on senior citizens to staff the team of volunteers, who may be rewarded with autographs from their favorite rugby stars.) This large-scale world event could prove a pre-Olympic testing ground.

If the setup proves fruitful, it might generate other volunteer crowd-editing efforts among fans of, say, ramen noodles or trains as well as other sports.

While MT is never expected to replace the human brain, globalization has vastly outstripped the supply of flesh-and-blood interpreters, whether on the battlefield with U.S. troops in the Middle East or shepherding travelers around Shikoku. But in many situations—ordering food, buying souvenirs, or following guides in an emergency—the just-OK translation offered by MT is perfectly adequate, Isahara argues.

“Creating English-language manuals is costly and time-consuming, and if the product life cycle is rapid, it’s hard to keep up with iterations. So MT is definitely the way to go,” he argues. “This could end up helping everyone’s bottom line.”

Translation apps, of course, are a dime a dozen nowadays—no, make that free. Google Translate and Skype Translator already have millions of users around the globe. So how could NICT’s VoiceTra app hope to beat the world’s favorites, with their exponentially larger universe of data to draw on? Sumita and other experts argue that when it comes to assembling a corpus of language pairs—say, English and Japanese translations—quality trumps quantity. NICT seeks to further up its game by tightly controlling each corpus by subject matter.

“The point is to select a tailored system for translation,” Sumita says. Overly general databases, he argues, inevitably lead to bad translation. Just as human translators must have a grasp of the lingo and concepts in their area of expertise and constantly stay abreast of new developments, computer-based translation has to be customized and updated by domain in order to work effectively.

Besides tourism, NICT has set up domains for recipes, computer manuals, and patents. Its patent document translator, he said, “has achieved good performance.” While the results may not be good enough for submitting to the patent office, the app can handle tasks like scanning a database to check for infringing ideas.

In a random and unscientific face-off, I opened Google Translate for a simple, typical tourist translation: “Tell me how to get to Shinjuku Station!”

Google accurately captured my spoken words and quickly delivered a translation—of sorts. It surely would have left the listener scratching his head:

To Japanese ears it sounds something like, “How I at Shinjuku Station arrive?”

VoiceTra’s translation, based on its carefully curated corpus, was also flawed but much closer to natural Japanese speech:

新宿駅にはどうやって行くのですか?
(“How does one get to Shinjuku Station?”)

Another app, specially refined for tourists, comes courtesy of NTT DoCoMo, one of Japan’s leading telecom providers. It is based on the company’s own translation engine, called JSpeak, which has logged over one million downloads, mostly to Asian travelers, along with students of the Japanese language. The translation function is seen as just another bell-and-whistle on a constantly updated guide to shopping, dining, and sightseeing.

“We try to keep it up to date,” says Junichi Igarashi, senior director of the company’s Smart-Life Planning Department. “We use phrases relevant only for particular stores.” The ultimate goal, he says, is spreading the riches of Japan’s tourist boom more evenly across the country.

“Language is clearly the main barrier to tourism in remote areas,” he explains. Owners of rural hot spring inns, for instance, are unable to handle foreign guests. MT, he contends, “will reinvigorate our small towns.” These types of free and accurate—if basic—translations may smooth rough cultural connections, especially when dealing with dozens of languages in large and hectic events.

I tried VoiceTra again, uttering something completely out of its wheelhouse. “The rain in Spain stays mainly on the plain.” The last word, captured as “plane”—a logical assumption for a tourist app—led to a nonsense translation. The day when machines will be translating Broadway musicals may be many Olympics away. But as far as Japan is concerned, that’s just fine.

Lucille Craft is a freelance writer based in Tokyo.
Design by Michelle Bersabal